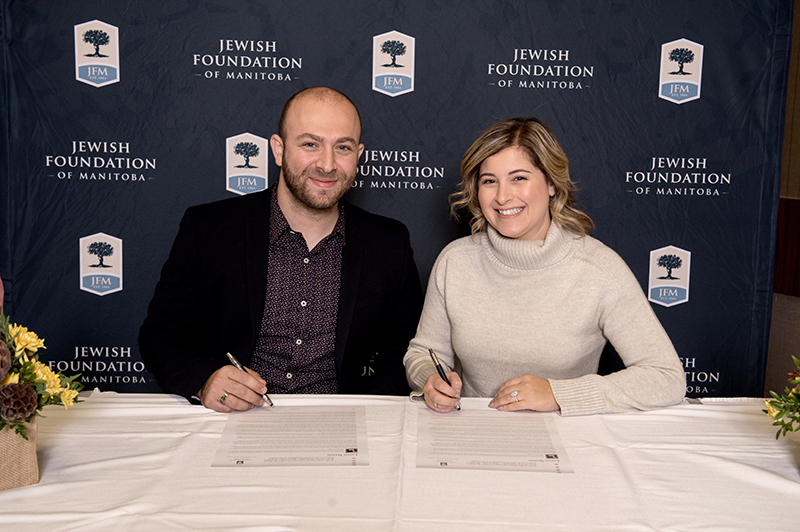 Igal Margolin, along with his wife Ilana Shapera, sign their stories for the Endowment Book of Life

A tribute to my grandparents, Sophia and Isaac Serebnitski

It is my privilege to honour my Babushka and Dedushka — my grandmother and my grandfather — through the Endowment Book of Life.

Isaac and Sophia Serebnitski (née Skoblova) were remarkable people who led my family from Ukraine to Israel, and who each set a remarkable example of how to live life.

Sophia and Isaac married in Ukraine and raised two children: Elonora (my mother) and Mark. In the late 1980s, the former Soviet Union was falling apart and the entire family decided in 1991 to leave our city of Krasnoarmeysk and make a fresh start in Israel: my grandparents, my parents, my brother, and my uncle and his family. Ten of us, initially, all living in one two-bedroom apartment in the Ramot neighbourhood of Jerusalem.

I remember how cramped it was, but I was a kid and I loved it and I loved having my grandparents around.

My Babushka was especially excited about the move to Israel. She was the only one in the family to learn Hebrew before leaving Ukraine. She was a proud and patriotic Jew, happy to move to the Jewish homeland. In our early days in Israel, she set out to teach her grandchildren about the land. I remember that she gave each of us an assignment about places in Israel. We had to go study and then make a presentation to the whole family. She also worked while we lived in Israel, having found a job in a library.

I also remember her as a deep thinker, a good conversationalist, and a spiritual woman. When I think about my Babushka, what pops into my mind was a conversation we once had about whether people have souls.

I also remember the sense of pride and dignity that she carried with her. She had been diagnosed with leukemia and as her grandchildren, all we knew was that she wasn't feeling well. She went into remission, but then the disease came back with a vengeance in 1995. Those were tough days for her as we had moved to Beit Shemesh, and she did not like having people take care of her. She passed away in 1997. Before she passed, she had written a story about the recent birth of my cousin and shared it at a family gathering. She was expressive and philosophical, perhaps aware of her own mortality.

My Dedushka was a character and a self-proclaimed troublemaker. Always joking, always smiling. He was a lively and fascinating storyteller and was crazy about his grandchildren. He also had the most remarkable work ethic of any man I have ever known.

As a young man, he had dreamed of becoming a dentist (and was very proud that I became one). There were restrictions in Ukraine about how many Jews could get into dental school. His sister went, while my Dedushka instead became a dental lab technologist, a career he treasured. He liked to tell the story of his days in the Ukrainian army when he was sent to remote outposts. The soldiers saw him as a medical expert and would come to him with their problems — everything from toothaches to warts. He laughed it off and did the best he could to help.

My Dedushka was a diabetic, but you couldn't tell by the way he lived his life. He was a heavy smoker, survived a heart attack, ate tons of candy and bread, and his favourite dish was zazharka (a greasy plate of congealed fat and fried onion). I remember on one trip to Winnipeg, he went to Superstore and bought seven loaves of bread and finished them by himself in three days.

When my grandmother died, my grandfather moved with us to Beit Shemesh but continued to work in Jerusalem, almost 40 kilometres away. He would wake up at 5:00 a.m., take the bus, then walk to his office — clean shaven and neatly dressed. Before the return journey, he would stop at the Machaneh Yehuda market for groceries and then shlep them home. He did this until he died at the age of 82. Not bad for a diabetic who virtually ignored his condition.

In Beit Shemesh, he lived with a woman named Anna and grew to love life there. When my family and my uncle's family moved to Winnipeg, he showed no interest in joining us. "I have done all the moving I'm going to do," he said. He endorsed our move to Canada, and visited Winnipeg every year. He always came equipped with a cheat sheet of English phrases spelled out with Russian phonetics.

Honouring my Babushka and my Dedushka through the Endowment Book of Life feels like a fitting and important gesture. My grandmother, in particular, was proud of her Jewish identity — as am I — and the Jewish Foundation was so very helpful to me and my family when we first settled here and when I was pursuing my studies. It is my way to give back, honour the past, and build the future of our community.