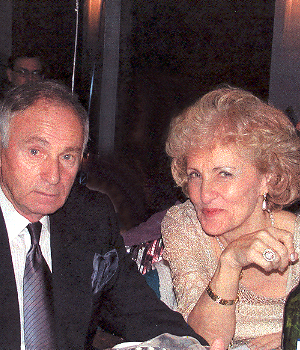 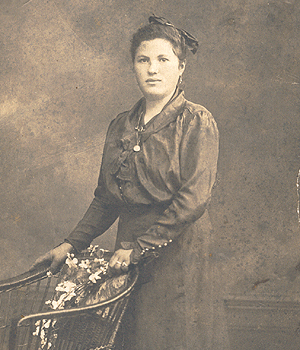 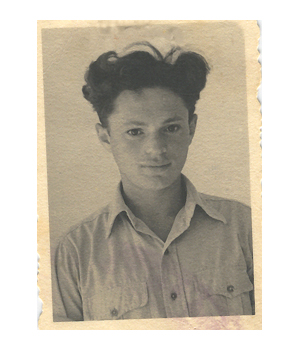 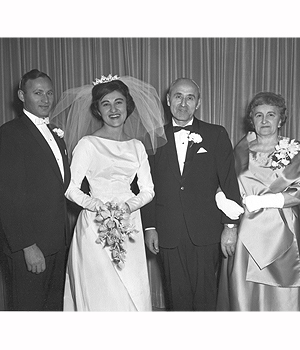 Saul and Ida with Ida's parents, Ira and Rosa Reiss 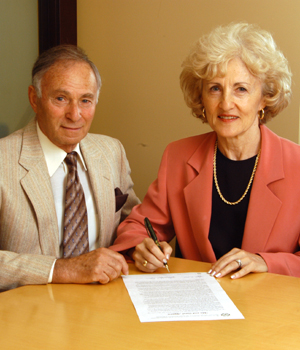 "Without hope, life is hollow." This statement sums up the philosophy of Saul (Joil) Alpern and his wife Ida (Reiss), whose early lives were dramatically different.

Ida was born in Edenbridge, Saskatchewan, the youngest child and only daughter born to Ira and Rosa (Hecht). Fortunate enough to be able to leave Poland in 1939 with their three sons Harry, Sam and Ed, the Reiss family settled on a quarter section of farmland. Although there was a Jewish community in Edenbridge, Ida's parents felt there was no future for their children on the farm. Harry and Sam left the farm in the late forties, and by 1950 the rest of the family joined them in Winnipeg.

158 Matheson Avenue became home to ten-year-old Ida. First starting at Peretz School, and then transferring to Luxton and St. John's, Ida envisioned, while still in grade eight, her future as a dietitian. In 1956, she entered the University of Manitoba and earned her B.Sc. (H.Ec.) degree. She then completed a dietetic internship at Toronto Western Hospital. After working in both clinical and administrative dietetics, Ida became the Assistant Director of Dietetics at the Health Sciences Centre, a position she held for many years until her retirement in 1995.

Saul was one of four children born to Isaac and Rosa Alpern in Romania. Memories of life in the two Romanian provinces of Bukovina and Bessarabia are well documented in No One Awaiting Me, a Holocaust memoir in which Saul details his own story in the context of the fate of more than 250,000 Jews who were forced out to the Ukraine and perished in an area called Transnistria. The book was co-published in 2001 by the University of Calgary Press and Jewish Heritage in New York, and received three awards: the Canadian Jewish Book Awards-Holocaust Memoir Prize, and the Manitoba Writing and Publishing Awards for best non-fiction and best first book. The book was dedicated to the memory of his parents, his sister Molly, and brothers Shimon and Avrum. Avrum was the youngest child and the only other family member who survived the Nazis, but fell in 1948 defending the new state of Israel. He belonged to the Palmach, the elite force of the Israeli army, and was buried in Mount Herzl cemetery in Jerusalem.

From 1941 until liberation by the Russian army in 1944, Saul survived death marches, forced labour camps, hunger, cold and loneliness. Stealing and begging became a way of life. Following liberation, he was trained by the Russians as a sapper, and removed mines planted by the German and Russian armies.

In 1946, hoping to reach Palestine, he left Russia and crossed Europe illegally, staying in Displaced Persons (D.P.) camps until he reached Italy. Saul soon learned that even after six million Jews had been slaughtered by the Nazis, Britain still applied its 1939 "White Paper" limiting Jewish immigration to Palestine while tens of thousands of homeless survivors lingered in overcrowded D.P. camps. Saul believed that to regain one's identity and have a home to go to, one had to fight to oust the British from Palestine, so he joined the Irgun Zvai Leumi, the fighting force of Betar. Since belonging to the Irgun (outlawed by the Haganah) made it difficult to secure jobs in Palestine, Saul, being penniless and a believer in free enterprise, decided to make a detour to Canada. His plan was to earn some money, buy a truck and move to Israel and be independent. Plans have a way of changing.

He arrived in Canada in March 1948, and was made to feel welcome by the Winnipeg Jewish community. He was fortunate to find a home with Zalman and Zlote Chisvin. They and their children, Phyllis, Jack and Allan, welcomed him and made him feel like part of the family. Work was plentiful in the garment industry and Saul quickly got a job as a cutter. Being ambitious and industrious he put in a lot of overtime and changed jobs frequently, a method he discovered to increase his hourly wage more rapidly. He joined the Luxton Royals, a soccer team that went on to be city champions.

In the early 1950s Saul started in the cattle business, a business he enjoys to this day. He bought a truck on credit, went to farmers to buy a few cattle and sold them at the Winnipeg stockyards. With little experience and limited money, he slowly learned the business from his mistakes. Once he became more knowledgeable and got a larger loan from the bank, he started buying at auction markets and shipping to eastern Canada and later, to the United States.

In 1963, he met Ida. After about three weeks they became engaged and were married two and a half months later at the Rosh Pina synagogue. It was a short courtship that resulted in a long, happy marriage.

Saul and Ida feel that the Winnipeg Jewish Community should be proud of how they accepted and integrated the survivors of the war. Saul decided long ago that he was going to live a life that his parents would have wished for him and he has done so. Each survivor copes differently — how one copes is as personal as one's fingerprints.