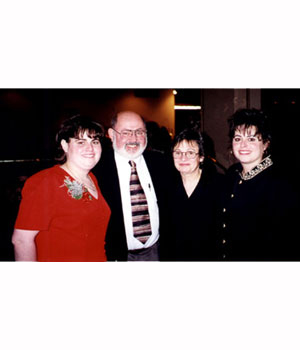 My paternal grandfather David Yamron (Yamrom) came to Canada from Gomel in the Ukraine around the year 1910. Two years later he sent for his wife Bertha and their three children Jack, Louis and Rose (Numerow) as well as his younger brother Samuel. In Winnipeg David and Bertha had two more daughters, Fanny (Shniderman) and Edith (Hestrin). David worked as a blacksmith and for the Canadian Pacific Railway.

My mother's parents, Isaac and Esther Dolgin, arrived in Winnipeg from Yekiternislaw, also in the Ukraine, around 1913. They had eight children, six of whom came to Canada with them. These were Fanny (Ludwig), Israel, David, Joseph, Lila (Levine) and my mother Lillian. Their eldest son Marcus was conscripted right off the boat on their way to Canada. Their youngest, Beatrice (East), was born here. Isaac was a watchmaker.

My father Louis (who worked for L & S Electric and the CPR) and my mother Lillian married and had two children - my older sister Irene (Rosenberg) and myself. I was born in St. Boniface and grew up on Bannerman Avenue in the North End. I received my Jewish education at the Folk Shul, Peretz School, and the Talmud Torah. I attended Champlain and Machray schools for my elementary education and I went to St. John's and United College for High School.

As a boy, I was involved with the YMHA and the Boy Scout Troop that met at the Rosh Pina. Involvement with these two organizations, as well as time spent at Nordic's Pool Hall, left me with my strongest and fondest memories of growing up in Winnipeg's North End.

In 1963, I married Fraydel Dudeck, the daughter of Morris and Sarah Dudeck. We have two daughters, Brenlea (Biggs) born in 1967 and Karen (Yamron-Shpeller) born in 1970. Our granddaughter, Samantha Ariella Shpeller, was born in 1998.

After completing my formal education, I spent five years working in retail on the Avenue. The next 18 years were spent at World Wide Distributors. In 1981, Fraydel and I bought Nathan Detroit's Sandwich Pad in the Lombard Concourse, which we continue to own and operate to this day. I also serve as a member of the Board of Trustees of Seven Oaks Hospital.

My personal philosophy for success is very simple. I believe that good things come to those who wait, as long as they work like hell while they are waiting. Keeping this in mind I believe that the future holds good things for the Jewish Community of Winnipeg.