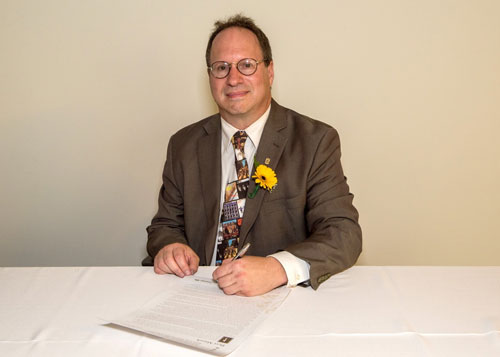 Ian Barnes signs his story for the Endowment Book of Life

I arrived in the world in 1958, the son of Merle and Philip Barnes. My mother, a devoted homemaker, passed away too young in 1994. She was a devoted homemaker who had a profound love for Israel and of Judaism. My father was an obstetrician and gynaecologist, is now retired and enjoying his senior years playing tennis and attending to various buffet tables in Palm Springs with his partner Marta Faludi. He describes himself as not so much religious, but a passionate Zionist. My mother's parents were Laika and Pinya Margolis, Russian immigrants who came to Canada in the early 1900's. I vividly recall sitting with Pinya in his home on Scotia Street watching the Maple Leafs win their last Stanley Cup in 1967.

My father's parents were Shirley (Finkleman) and Fred Barnes. Shirley was an American from Minnesota while Fred also came from Russia. I recall activities with my father's parents to a greater extent than my mother's parents because they were younger. Their Winnipeg roots were in Point Douglas on Hallet Street. The Barnes' were known for their cast iron stomachs and quick tempers. Fred was a boxer who did not limit himself to adversaries in the ring. He also punched a police officer while escaping from a craps game and the horse pulling the milk wagon, who made the mistake of relieving itself into the basement window of the warehouse where Fred was employed. I loved watching Sunday night TV with Fred. He would sacrifice himself and watch Ed Sullivan, if I sat with him through his beloved Lawrence Welk. Bonanza was neutral territory. Shirley loved to gamble, along with her good friend Bessie Earn, and was quite successful at it – perhaps too successful. The phone rang late one evening; my father had to retrieve Shirley and her friends from the local precinct. The friendly game had been discovered and apparently was illegal. It was a great time when Shirley would take older sister, Enid and I downtown on the trolley for lunch or a movie. Baba loved going to the Mardi Gras or the Chocolate Shop. I thought of her as the "Coffee Crisp" lady as there was never an occasion that didn't call for urgent distribution – a booster shot, a "zets" from my dad…. Sunday nights were the wonderful dinner "competitions" at my grandparents. Competitive because I was sure if the power failed and the house went dark – a reach for a piece of chicken would result in 11 forks in my hand.

My mother took great pride in her wonderful cooking - especially on the high holidays when the family would gather. My father was very supportive, especially making it out to most of my hockey games while he was on call or making his "rounds" at the hospital. The life of an obstetrician was not easy. More often than not the phone would ring at dinner time…my dad invariably asking the imminent question between bites… "Is she 10 centimeters yet…?" My dad's patients loved him. I am still known as "Philly Barnes' son" by his patients and I wear that moniker with great pride.

One could not ask for a better sister growing up. Enid was a "trailblazer" in pushing my parent's buttons while I was the "good sibling". Enid is beautiful both inside and out. The boys were always knocking at the door and she had a social life I was envious of. In the meantime she shaped my early outlook on life, my love of music and to never take "no" for an answer. The defining moment in our relationship came early on in her teen years. We made a lifelong pact not to tattle on each other – no matter what. Obviously there was something specific she was up to at that pinnacle moment – but it has been our standard operating procedure ever since. It was a dream come true when my parents went on vacation and Enid was left in charge… She has been unabashedly supportive of me throughout all these years and I learned so much from her. I now forgive her for telling me that dad was "never coming back" when he left us alone in the car (not a second thought in the 1960s) while on rounds at the hospital and also for not taking me to see The Monkees. My nephew Stephen Nap, Enid's son, is also a doctor. He is married to Star (Ackerman) Nap. They have two young sons, Rafael and Santiago and live in British Columbia.

My lifelong friend is John Stinson. No one could have a better friend. John and I have been through thick and thin together. In the early years the "thin" referred to some misunderstandings while we were school patrols and perhaps, unbeknownst to each other, dating the same women on occasion. Now the "thin" predominately refers to our hairlines. John has stood beside me since we met 52 years ago. It is not possible to have a more supportive friend. Our lives are intertwined.

I have two incredibly fantastic sons, Alex and Matthew. I met their mother, Karen Olson, in Grade 9. Karen is a great mother and we both take pride in their intelligence, individualism and gentle nature. Alex loves Japanese history and culture. He currently teaches ESL in Kyoto, Japan with his girlfriend, Roma. Matthew, who loves all things related to hockey, is currently enrolled at the University of Manitoba.

I grew up on Niagara Street in River Heights. I attended the Herzlia Academy, William Osler, River Heights and Grant Park schools. I was an absolute product of the 60's and had a very happy childhood. People who know me today know me for my love of the 60's, my 1963 Corvair and my general reluctance to let go of that decade. I proudly display an unopened bottle of Tab (with saccharin) in my home, my homage to that decade… I graduated from the University of Manitoba with a Commerce degree in 1982. Later I became a Certified General Accountant.

I was fortunate to have many friends growing up, both Jewish and non-Jewish. I am not a religious individual but I am proud to be Jewish, proud of the history and stand staunchly with the State of Israel. I also greatly respect those who are observant, amongst all religions. I try to follow the "Golden Rule" in my spiritual beliefs, however in my formative years I found it hard sometimes, to be "Jewish" in the way others expected me to. I was deeply impacted in my studies at Herzlia, when Rabbi Horowitz told our Grade 3 class that we would "die if we did not keep kosher". Needless to say that took the shine off my visits to A&W for a while. Also, that cultural divide of Jewish versus non-Jewish entered my life early in my teen years. I was strongly encouraged to socialize only with my Jewish friends in the name of cultural protection. In those formative years I resented this concept, and to this day don't believe exclusion of other faiths is a healthy or acceptable way to practice Judaism in our society. That despicable comment by the Rabbi eventually made me realize in my later years that while observance is absolutely a discipline and symbol of devotion in all religions – many of the religious issues we struggle with today are man-made by those clerics and other religious authorities throughout history with interpretations that are more self-serving than for their people.

So the "appropriateness" of my style of Judaism has being a life-long struggle for me. I am a Zionist and firmly believe in the State of Israel. I get misty-eyed when I hear "Hatikvah"; not only for the beautiful melody – but what the song represents….hope for a people persecuted throughout history. I am outraged by the never-ending stories of anti-Semitism; especially astonished at the shamefully complicit Canadian role of the Mackenzie King government of the 30's and 40's operating under the disgusting mantra "none is too many."

In 2000, my career brought me to the Jewish Foundation of Manitoba. I am proud to be JFM's first Director of Finance/CFO. It is here I have learned to accept my "style" of Judaism through the wonderful staff that has unknowingly assisted me with this struggle. Marj Wiebe and Patti Boorman, two Mennonite sisters who explained to me early on what an honour it is to serve the Jewish community; Jewish "imports" such as Katarina Kliman and Pam Minuk. Pam and Katarina, devoted to Judaism, teach me so much through their unwavering dedication; Stephanie Casar and Jennifer Wood, diligently working for the cause – Stephanie is an outstanding executive assistant and Jennifer is the finest Raiser's Edge consultant in Canada, coveted by so many organizations. The wisdom of Karen Solomon and her pragmatic approach to Judaism; Marla Aronovitch, my wonderful foil in our ongoing kashrut debate; Marsha Cowan, my former Grade 7 teacher and our leader, who has taught me so much professionally and offered the guidance that being a Jew is being a mensch in the community; David Cohen, my mentor who brought me to this wonderful Foundation. Lastly the work of the Foundation itself – demonstrating through its leadership that it is critical as a Jewish organization to be inclusive in society and contribute to both the Jewish and general communities. This is the Jewish way! You have all helped me understand what it means to be a Jew and practice the spirit of Tikkun Olam. I pray for peace, for Oseh Shalom Bimromav, for all of us.