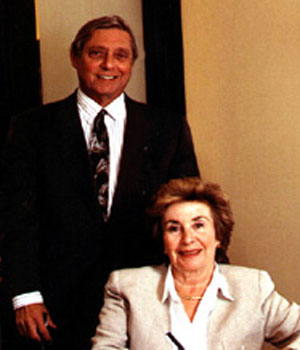 Both my grandmother, Golda Zwet (nee Barsky) and my grandfather, Ben-Zion Zwet, an orthodox Rabbi, were born in the Ukraine in 1882 and 1879 respectively. My grandfather arrived in Winnipeg in 1913 after working in Regina as the Shohet. He had come alone to establish a base for his wife and children, who would follow. The Great War and the Russian Revolution interrupted these plans. Finally after the War, he traveled to Europe in 1919 where Golda had been raising her young family, including my mother Cecilia. The family finally arrived in Winnipeg in 1921, escaping from Russia under very dangerous circumstances. Accompanying them was Leon Ausereper (Asper), my mother's fiancé at the time. He was stopped at the Belgium border, and remained there for five more years, arriving in Winnipeg in 1923. He married my mother on August 15, 1924.

Using their considerable musical skills, my parents were first employed at the Capital Theatre in Winnipeg in the pit orchestra and also later lived in Calgary conducting and playing in pit orchestras there, as well as in Hotel Salons. My father also played in the first violin section of the Winnipeg Symphony.

In 1929 my father bought the Lyric Theatre in Minnedosa and it is in Minnedosa where I was born, on August 11, 1932 and where my brother Aubrey and sister Hettie and I spent our early childhood years. In 1941 the family moved to Neepawa in order to operate the Roxy Theatre. In 1945 my family and I moved to Winnipeg where, to this day my mother and her two sisters reside, along with my brother Aubrey, myself and my three children and their families.

I received my Bachelor of Arts in 1953, my Bachelor of Law in 1957, and a Master's Degree in 1964, all at the University of Manitoba. During those years, I took part in debating competitions, and was an editor of "The Manitoban". I practiced law for 15 years, specializing in Tax, and wrote a weekly newspaper column for the Globe & Mail for 14 years. I was a founding partner of the firm now known as Pitblado Buchwald Asper, and was honoured in 1979 by being appointed Queen's Counsel. In 1970 I became the leader of the Liberal Party of Manitoba and sat as a Member of the Legislature of Manitoba for five years.

Through all of this my wife Babs, whom I married in 1956, and my three children David (born 1959), Gail (born 1960) and Leonard (born 1964) were a source of strength and reminded me of the importance of commitment to family and community. Following my career in politics I founded the Company that is now known as CanWest Global Communications Corp. - an international media company with operations in several countries. While my business career has been extremely fulfilling, of equal importance has been the establishment of my private foundation, the Asper Foundation which I created in 1983. It has been my profound desire to ensure that a permanent capital base, dedicated to charitable activities, be a legacy I and my family leave to Winnipeg and the broader community. I am extremely proud of the contributions the Foundation has and will continue to make long after I am gone.

In recent years, I have received many gratifying awards including my induction as an Officer of the Order of Canada in 1995, my induction as a Laureate of the Canadian Business Hall of Fame and most recently, my receipt of an Honourary Doctor of Philosophy degree at the Hebrew University of Jerusalem, with which I have been associated for many years. My family was committed to a Jewish way of life and to Zionism, and I adopted those values. My parents drilled the belief into me that no one should ever leave the world the same as when they entered. No one should just take up space but should do all they can to make a difference for the better - in short, to matter. I believe we all have an obligation to conduct ourselves in this manner and hope that with what I have accomplished I will have been able to improve this world in some small way, leaving it a better place than when I entered it. I take great pride knowing that my children will carry on this family ethic. If they do, I am confident our community will flourish in the decades to come.