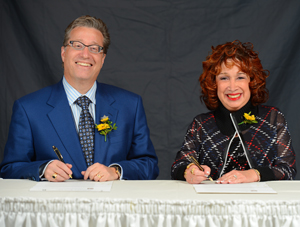 Hope Morry signs her story for the Endowment Book of Life

Howard and Hope Morry are a living example that two hearts are better than one.

Howard is the son of Julius and Shirley Morry (née Slotnikov), who were both born in Winnipeg. Julius is the son of Saul and Lily Morry (née Steiman). Saul was an accountant who also ran a "landsmenschaft" or Jewish benefit society for immigrants. Saul, who enjoyed ice skating, was denied admission to the Winnipeg Winter Club because he was Jewish. Lily was a respected artist, who passed her talent on to Julius, who became one of the world's most respected art restorers, attracting work from collectors and museums alike.

Shirley, known to her relatives as Tzipie, is the daughter of Sam and Sally Slotnikov. Sam, a principled man, once challenged a much younger man to a boxing match after he called Sam a "dirty Jew." Sam won. Sally, known to her friends as Tzerna, was a champion of Jewish culture and a real force of nature. If they had made a show based on Sally's life it would have been called "Everybody Loves Tzerna."

Hope was born in Calgary to Winnipeg parents who thought they had left for greener pastures. Hope's father, Sid Gutnik, had been transferred to Calgary and then Vancouver by RKO Studios, then owned by Howard Hughes. Shortly after their only child Hope was born, Sid and Florence returned to Winnipeg, where Sid went into real estate.

Sid's father was from Ireland and his mother was from Scotland. Sid's mother, Bessie, died when Hope was a baby; and William and Charles, Hope's grandfathers, passed away when she was a teenager. She was very close to her mother's mother, Sarah, who died just a few months before Hope met Howard.

Howard was born in 1959. His life growing up was idyllic; a childhood with lots of friends and seemingly endless sunshine. Julius and Shirley built a home on the corner of Mellish Avenue and McCurdy Street, the first home in that area of Garden City.

Howard and his younger siblings, Jeff, Marla, and Karyn went to I.L. Peretz Folk School. They were joined by hundreds of Jewish kids in and around their age, who also went to the YMHA on Hargrave Street, B'nai Brith and Massad summer camps, and who joined BBYO. Howard also attended Jefferson Junior High School and Garden City Collegiate before going to the University of Manitoba.

The family moved to Hillhouse Rd., in the new "North End," after Julius and Shirley flirted with moving to California. They decided to stay in Canada after they became concerned that Howard might be drafted into the Vietnam War.

Hope attended Herzlia Jewish day school, and was part of the Jewish vanguard in the "South End" of the City, which would eventually come to dominate Jewish life in Winnipeg. She later attended River Heights School, Grant Park High School, and the University of Manitoba where she graduated with a Bachelor of Arts degree with a major in Psychology. Hope had lots of close friends and was active in BBYO.

She graduated from the Barbie Dream House to Nancy Drew Mysteries. The family spent summers with relatives in Chicago, and Hope enjoyed trips to Palm Springs and Los Angeles.

Howard loved summers at the cottage and was a voracious reader. He was a big fan of the Winnipeg Jets. Before he graduated from Commerce and Law at the University of Manitoba, he managed to build a career as a professional writer and business consultant. In the meantime, Hope exploited her innate fashion sense, inherited from her mother Florence, first working in fashion at Eaton's and then as a gemologist, buying jewellery for the Hudson's Bay Company.

When Howard and Hope met at a nightclub in 1982 it was love at first sight. Within four months they knew that marriage was in the cards, and Howard announced his intention to propose within the year after he sufficiently built up his ERA (engagement ring account). They ultimately married in 1984 and continue to nurture a loving partnership based on mutual respect and a profound love for their two children Joshua (born in 1991) and Samantha (born in 1996). Howard and Hope have built a family whose members care about each other and who enjoy each other's company. They enjoy travelling together and discussing the events of the days at dinner every night. In their children, Howard and Hope see two young people who are engaged and smart, who are proud of their heritage, and who share the values of their parents.

Howard and Hope have always been each other's champions as they pursue their professional and community interests.

Hope has long been an active volunteer. Her work includes: co-chairing the General Campaign, the Top Donors Division, the Women's Campaign, and the Lion of Judah Division for the Combined Jewish Appeal; serving on the boards of Jewish Federation of Winnipeg, Hadassah-WIZO, the Winnipeg Chapter of Canadian Friends of the Hebrew University, MTC, and Manitoba Opera; and chairing major fundraising events for MTC and the Alzheimer Society of Manitoba among others.

Howard has also volunteered extensively in the Jewish and general community, in Winnipeg and nationally. He has served as the President of the Jewish Federation of Winnipeg and is a former two-time Chair of the Combined Jewish Appeal campaign; regional President, national Board member and national New Leadership Chair of Canadian Friends of the Hebrew University; and a variety of leadership roles with State of Israel Bonds, the Jewish National Fund, Hadassah-WIZO, the Jewish Heritage Centre, Shaarey Zedek Synagogue, UIA Federations Canada, and the Jewish Foundation of Manitoba, among other Jewish community organizations. In 2011, he was awarded The Max and Mollie Shore Award for his shining record of community work.

Howard was also the President of a Rotary Club, the founding Chairman of the Canadian Association of Farm Advisors, and Chair of the Lawyers Division of the United Way, among other volunteer efforts in the general community. One of Howard's most important volunteer endeavours is as one of the founding members of the Arab-Jewish Dialogue, a group of Arabs and Jews who are working to improve relations between the two communities. At the time of writing, Howard is Co-Chair of the group.

Hope and Howard are also enthusiastic supporters of the Canadian Museum for Human Rights. They embrace the project because it will shine a light on a number of key elements that have been the foundation of success in the West; factors that have allowed the Jewish people to thrive. They point specifically to the right to choose who governs us, the indiscriminate application of the rule of law, limits on the government's right to restrict fundamental freedoms, and a free-market system that encourages innovation and rewards hard work. We often take this foundation for granted in North America, say Hope and Howard. The Museum will help identify potential cracks in the foundation by continuously celebrating Canada's stalwart commitment to the protection of human rights.

Hope and Howard's commitment to volunteerism and philanthropy is born from their immense pride in their Jewish identity and a deep celebration of Jewish peoplehood and the Jewish narrative throughout history. In receiving The Max and Mollie Shore Award in 2011, Howard shared his and Hope's perspectives on Jewish life. The world Jewish community has always punched above its weight — in business, the arts, science, and in other fields. For this, the Morrys believe, we should be proud. Jews have always persevered against all odds and despite the evil intentions of others through pogroms, the Holocaust, the Inquisition, and other horrifying times in history. Through faith, strong bonds, inner strength, and collective spirit, the Jewish community has survived adversity, and has successfully retained culture and values. But Howard also shared their fear that apathy could compromise the Jewish continuity that we all cherish. "Our fate is in our hands," they believe about today's generation of Jewish community leaders.

Howard and Hope aim to make a difference, to not be "free-riders," and to play a role in helping Jewish life flourish today and in the future. They are particularly excited about co-chairing the Jewish Federation of Winnipeg's "Securing our Future" initiative, designed to ensure the viability of the community in 10 years and beyond. They enjoy the challenge, they enjoy collaborating with like-minded community leaders, and they enjoy the belief that their efforts will make a difference. Howard and Hope believe that our community needs to nurture and celebrate our volunteers, our donors, and our professionals. They are grateful for the positive experiences they've enjoyed and the heartfelt recognition they have received for serving the community. That said, what truly drives Howard and Hope's community service is their passion; their desire to make a difference. They believe that "changing the world" is too large and complex a task for any single person or family to achieve. That said, they believe that we all have the opportunity to move the world in the right direction by focusing diligently on improving our own corners of the world. Starting with how we interact with our children, our family, and our friends; how we perform in our careers; and how we choose to contribute to our communities — we can foster positive energy, make a difference in people's lives, and partake in "tikkun olam" (the repair of the world). The Morrys believe that such energy is a cornerstone of the Jewish DNA.

Professionally, Howard is a respected lawyer who has been keen to give back to his profession. He was the Chair of the Tax Subsection of the Manitoba Bar Association (MBA) and the Joint Tax Committee of the MBA and the Institute of Chartered Accountants of Manitoba; the President of the Canadian Association of Estate Planning Councils of Canada; the President of the Estate Planning Council of Winnipeg; Course Head for Taxation and Estate Planning, Law Society of Manitoba Bar Admission Course; Chair of numerous national conferences for the Globe and Mail, Financial Post, Insight, Canadian Institute, and others; contributing editor to numerous legal, tax, and financial journals across Canada; and keynote speaker at the federal government's Prosperity Initiative. His professional excellence as a lawyer has been recognized by his peers across Canada, who have rated him "AV," the highest rating in legal ability and ethical standards. Through most of his career, Howard has also made a significant contribution to the advancement of aboriginal leadership in the Canadian business community. Under Howard's leadership, Pitblado LLP was the first professional firm in Canada to be granted the PAR symbol by the National Quality Institute for "progressive aboriginal relations." Howard has also mentored numerous young aboriginal professionals and business people across the country.

Howard was awarded the Queen Elizabeth II Diamond Jubilee Medal in recognition of his volunteerism and professional accomplishments.

Hope and Howard are proud of their contributions to Jewish life in Winnipeg and indeed all of Canada. They like to say that they feel good when they do good. They feel proud and lucky to be Jewish; fortunate to inherit a rich and beautiful cultural legacy and system of values. They feel enriched by their Jewish identity and attribute their motivations, activities, choices, and accomplishments to the sense of connection they feel to the Jewish narrative — something they consider to be one of history's greatest success stories. They also feel proud and lucky to be the parents of Joshua and Samantha, who Howard and Hope consider to be their true legacy. Hope and Howard are keenly committed to sharing their values, pride, and optimism with their kids so that they, too, will continue to be proud of their heritage and contribute positively to Jewish and Canadian life.