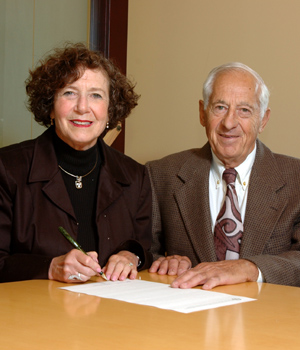 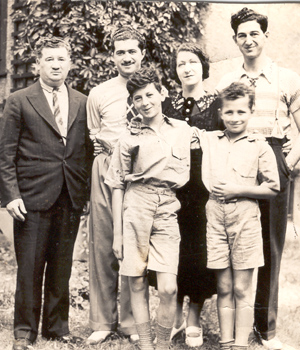 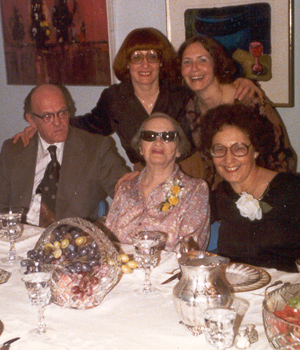 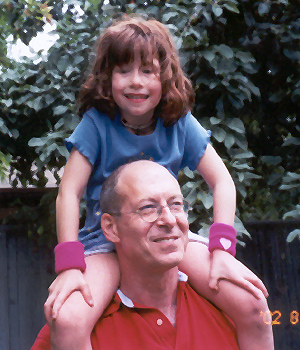 The Kahane's son James (Jim) with his daughter Alyssa 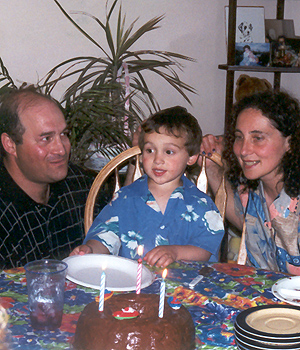 The Kahane's son Grant with his wife Sylviane and son Israel

In many ways, Hope (Oretsky) and Leonard Kahane's lives have been devoted to the Jewish community, and they both feel very strongly about helping to ensure its continued strength and viability. At the same time they have found many enjoyable and fulfilling experiences outside of the community.

Born in Winnipeg in 1930, Hope Renee was the third of Mary (Steiman) and Joseph Oretsky's four children. Both Mary and Joseph were emigrants from Russia, and involved locally, serving on the boards of Mount Carmel Clinic and the Hebrew Sick Benefit Association.

The family lived initially on Alfred Avenue before moving for a short time to McAdam Avenue, East of Main. When Joseph, a suitcase manufacturer, passed away in his early forties, his family moved back to Alfred Avenue. Mary, who was a brilliant student of English literature and poetry (and widely reputed as an outstanding baker and cook), began to lose her eyesight soon after Joseph's passing — but never lost her interest in her passionate pursuits (which included politics). Various circumstances led Hope to play a supportive role in her mother's life as well as in the life of her brother and one of her sisters. Hope emphasizes that it is critical for caretakers to find the correct balance between being there for other people and maintaining their own identity.

In her youth, Hope enjoyed roller skating, ice skating, baseball and cycling, and was involved with the YMHA and B'nai B'rith Camp. She was a student for a short time at the Peretz School, then William Whyte, Luxton, Machray and St. John's Tech, before studying to become a dental assistant. She worked in the dental field for two years before marrying Leonard in 1951.

Leonard was born in Winnipeg in 1925. His parents, Elizabeth and Abraham, had emigrated from Roumania around 1910, in order to seek a better life. Abraham manufactured cosmetics, decorative figurines and lamps. He was an adventurous, innovative and generous family man, and very supportive to The Beth Israel, a synagogue which he helped to found. Elizabeth was extremely devoted to her husband, four sons and extended family. She was active in Hadassah and Eastern Star. Both Elizabeth and Abraham were very gregarious and had a large circle of friends.

Leonard grew up in the Riverview area and attended Riverview School and Gordon Bell, where he excelled in track and field. While he made many lifelong and deep friendships in this area of the city, there was an undercurrent of anti-Semitism from some neighbours. Leonard spent weekends with family members in the north end, where he also attended cheder at Rabbi Gruber's four evenings a week and Sunday mornings for four years. His summers were spent with his family and friends at Winnipeg Beach.

Leonard was intimately involved with the Y on Albert Street for years, as well as B'nai B'rith, where he worked as a counselor. Leonard attended the University of Manitoba for his pre-med and Bachelor of Arts degrees, and Northwestern University in Chicago, where he attained his DDS. He taught at the U of M School of Dentistry on a part-time basis for many years.

Hope and Leonard have two sons. James Myron, born in 1953, is a chartered accountant living in Toronto and father to Alyssa. Grant Howard, born in 1956, is presently a health care worker living in Winnipeg with his wife, Sylviane, and son, Israel. When James and Grant were school age, Hope began doing volunteer work, giving her time over the years to the Children's Hospital, Children and Family Services, and National Council of Jewish Women. She conducted audiometric testing in elementary schools, participated in mental health play readings, and educated children about the handicapped through puppeteering.

In the early 70s Hope worked as a dental assistant to Leonard. On two separate occasions they volunteered their dental skills in the Caribbean during month long stays, and in 1998, they donated their services for one month in Grise Fjord in the Arctic. As well, Hope assisted Leonard for many years as he performed sophisticated dental demonstrations across North America.

While Hope and Leonard have often worked together, they also have played and pursued many hobbies together. Their family has been very passionate about boating. Since purchasing their first boat in 1958 they have spent every summer, except 2003, first on Lake Winnipeg and then on Lake of the Woods. They are also very much into square dancing which they have pursued since 1990, and in fact, winter away from their Charleswood home in Mesa, Arizona — the square dance capital of the world.

As a family, they have downhill and cross-country skied and in addition are life time swimmers. Leonard has hunted game birds and scuba dived in Belize, Mexico, the Maritimes and Hawaii, and did underwater archeological studies in many Manitoba waters. He was an eager golfer for about 12 years, as well as a licensed pilot in his early married years. He has played racquetball several times a week for many years and became an accomplished stone sculptor after retiring from his dental practice. .

While Hope would like to be remembered as a loving, caring and sensitive human being, both she and Leonard have high ambitions for the Winnipeg Jewish community. They hope that it will be strong, committed and prosperous, and a place that will attract and maintain young people. Leonard also would like to see the community gain complete acceptance and admiration from the non-Jewish community.

Hope and Leonard have been happy to financially contribute to many cultural and artistic institutions and organizations. The Y, the Asper Jewish Community Campus, MTC, the Winnipeg Art Gallery and Israel have all benefited from Hope and Leonard's generosity.