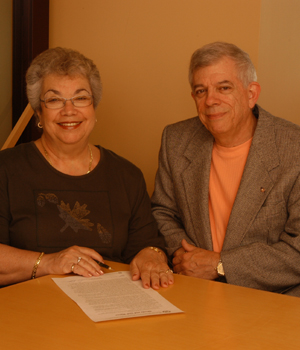 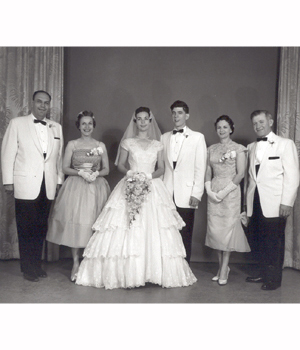 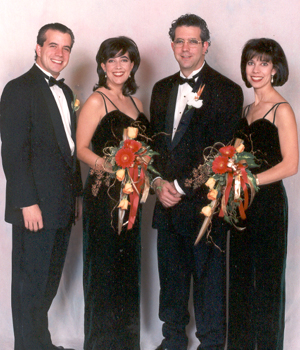 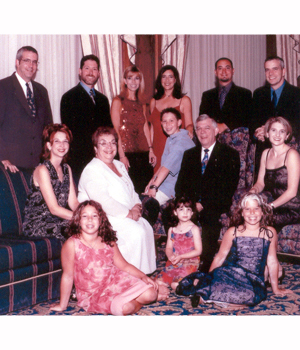 Sid and Hinda surrounded by their family 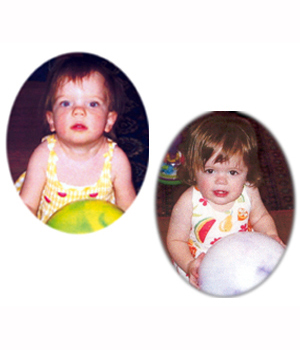 You don't have to be born here to call Winnipeg home.

We were married in June, 1958, and our honeymoon was our trip to a new home in Winnipeg. Sid was to attend school, I was to find work and we had to find a place to live. Over forty years later, our community roots are deep, as are those of our children.

So the real question is — how did two Easterners, one from Ottawa, the other from Naranda, Quebec find each other, and then feel so comfortable in Winnipeg?

Sid's parents, Jack and Rebecca, moved to Rouyn/Noranda to open and operate their own clothing store. The Jewish community was small, but Sid and his older sister Ruth, had no difficulty maintaining their Jewish identity. The home was a kosher, Yiddish speaking one, where all Jewish holidays were celebrated. The community hired a teacher to teach Hebrew subjects after school.

Young Judaea was very active in northern communities also. Sid celebrated his Bar Mitzvah at the shul in Noranda. His parents had a good balance in their lives. Living in a place where it took great effort to practice Judaisim, they did so very well. Jack loved hunting and he and Rebecca enjoyed boating and fishing in the North Country. After graduating from high school, Sid went to Israel for a year, well before it was fashionable. On his return, he moved to Montreal to start university.

I started out in Montreal, but moved to Ottawa as a youngster. My sister Elsa is nine years younger. So for a long while I was an only child. John, my father, worked and was involved with sports at the Jewish Community Centre. Sadie, my mother, was a stay-at-home mother and kept close tabs on her children. She was an ardent volunteer with ORT for many years. I was fortunate to have both sets of grandparents in Montreal, and later my father's mother moved to Ottawa as well. I think I learned my cooking and sewing skills from my "bubbies". Although I attended public school, and had little formal Jewish education, I always felt very Jewish. This was fostered by my involvement in Young Judaea. It was at camp in 1952 that I met Sid and that started our relationship. Completing high school, I went to Teachers College and became one of the first Jewish teachers in the Ottawa Public School system — teaching for two years prior to my marriage and the move west.

Four children later, we are all involved in the community. Michael (Flynn Gerb) Beth-Caren (Bobby Goldberg) Alan (Jenni Nozick) live in Winnipeg, along with our six grandchildren. Our daughter Andrea (Michael Goldenberg) lives in Toronto. Sid and I believe that it is the sense of family and community that has encouraged our children to remain, and return to the city.

My community involvement began with the Jewish Welfare Fund, now called Combined Jewish Appeal. Over the past forty years I have co-chaired three Women's Campaigns and have remained active until today. I was recognized for my service in 2000 when I received the CJA Shem Tov Award. All our children attended Talmud Torah — Joseph Wolinsky Collegiate, so I was very active and involved with PTA, along with National Council of Jewish women and the Chai Folk Ensemble.

While I worked as a full time parent and community volunteer, Sid held the responsibility of supporting the family. Sid's parents moved to Winnipeg and together with him purchased the Camera Shop. This led to the development of VIP Communications Ltd., which was one of the first companies focusing on the new communications industry. Sid's background allowed him to understand and use the new technologies. It was this skill that led him into the community, volunteering with the Chai Folk ensemble for thirty years. He had also participated in many fundraising functions for the schools his children attended. Eventually, he worked as Executive Director for the local synagogues. His community service was not limited to the Jewish community alone. Sid served on the Board of United Way, served as Chair of the Folk Arts Council of Winnipeg and Chair of Folklorama. He is also a long time Rotarian and served as President of the Winnipeg Club.

Sid and I have strongly held views and visions for the community. As signers in the Endowment Book of Life, we want to leave our grandchildren a message — not specifically about us as grandparents, but as people who were concerned about and committed to the Jewish community. We feel that a strong community has great impact on an individual's life — it's good to be Jewish. The vital, inclusive community of Winnipeg will make one's life more satisfying. Winnipeg must reach out to all new community members and encourage them to be participants. Synagogues must also stop looking inwards, and become part of the wider community — our Jewish Day School must remain an integral part of the overall community. We also see a need for another conservative synagogue in the south end of our city. If we are to be remembered, it should be as good parents and grandparents who were not afraid to become involved, not afraid of standing up and being counted when a position had to be taken. Our motto is, "Winnipeg is great because we know and care about each other" — a quality that should not be lost.