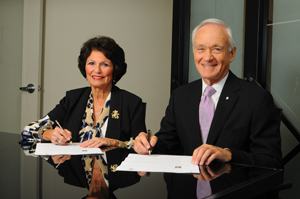 Hillaine Kroft signs her story for the Endowment Book of Life

My maternal great-great-grandfather, Shimon Lechtzier, and his three sons, arrived in Winnipeg in 1882, among the first group of Russian Jewish immigrants, numbering 24. In spite of the harshest realities, they came here in search of a better and more peaceful life — the freedom and safety to be Jewish, pursue a livelihood, and raise a family. I am a fiercely proud fifth-generation Winnipegger; it's a passion that has fuelled many of my activities and interests over the years.

Shimon, a devout man, was appalled to discover that the group of German Jews who had settled here the previous year had yet to establish a Jewish cemetery. Shimon and his peers made this a priority and within a year, B'nai Israel Cemetery in Elmwood was operational.

Moses Lexier, one of the sons of Shimon and his wife Chana, married Adelaide Tuck, who came from either Austria or Germany. Their daughter Elizabeth, my grandmother, was born in Winnipeg in 1893. She was a sophisticated woman, a debutante at the Eighth Annual Ball of Shaarey Shomayim Congregation, and a wonderful modern piano player. In 1913, Elizabeth married Louis Silverman who came to Winnipeg from Cincinnati. He opened the Colonial Theatre on Main Street, where he met and fell in love with Elizabeth, the piano player for "the silents," and they married in 1913. They had two children: Bernie and Anryette ("Anry"), my mother, who was born in 1921. Grammie Beth and Grampy Louie were young, beautiful, generous, fun-loving, modern people all of their lives, and we loved being with them.

My paternal grandfather arrived in 1910. Ben Jacob and his partner, John Crowley, founded Jacob-Crowley Mfg. Co., which became one of the most successful clothing companies in Manitoba. My grandfather was a quiet and modest man who was active in community life, as a founder of the Winnipeg Jewish Welfare Fund, as the first President of Glendale Golf Club, and in many other endeavours. As a businessman he was famously compassionate and understood the importance of workers' rights. Jacob-Crowley was the first company to sign an agreement with the United Ladies' Garment Workers Union. He led in enshrining a cost of living clause for workers, along with a universal health care plan for union members and their families. Ben married Dora Brown around 1912.

My Grandma Dora was a special and wonderful woman. Quiet and somewhat shy, she was very close with her grandchildren, providing a compassionate, listening ear. A highly motivated person, she went to night school to improve her English skills, brought a natural talent in math to running her household, and made sure that the holidays around her table were memorable and festive.

Ben and Dora had four children, including my father, Nathan, who married Anry in 1940. I am the oldest of their four girls and remain very close with Barbara, Janis, and Bette-Jane, even though we are scattered across Canada.

We were brought up by very young parents, and much was expected of us. My Mum was strict, and manners and clean and tidy rooms were a must. My Dad, who built the successful Tan Jay clothing company, demanded academic performance. We had to take piano lessons until we were 16 at least, and we all attended Girl Guides, Hebrew School, went to BB camp, and took dance lessons. My parents were both avid golfers, my Dad being one of Manitoba's best. He was a warm, colourful guy, and his untimely death at the age of 50 was very hard to accept. At his insistence, my mother eventually remarried (more than once) after his passing.

At the age of 16, I started to date Richard Kroft and married him in 1960, just before I turned 19. I graduated with a B.A. a year and a half later from the University of Manitoba and worked for the Children's Aid Society while Richard finished Law School.

Richard and I have three children — Beth, Steve, and Gordie — and eight grandchildren. Raising the kids and building a family together has been my greatest joy in life. All three are talented and colourful, and the way they live their lives reflects the values Richard and I tried to share. I've always said that I long for my children — even when I'm with them... and I still do.

My story would never be complete without mentioning my passion as a feminist (some might say obnoxiously so). My involvement in the Liberal Party of Canada gave me and other like-minded women a vehicle to begin the early work of the feminist movement within a political structure. I represented Manitoba as its first President on the National Women's Liberal Commission, and in keeping with its mandate of electing and appointing more women to government, I designed and chaired the very successful 1979 conference, "Women for a Change," which was open to all women of all political persuasions. I subsequently chaired two YMHA Jewish Community Centre conferences, in collaboration with Naomi Globerman, focussing on this subject.

My other work in the Liberal Party included chairing or co-chairing successful (mostly) provincial campaigns; founding Campbell House, the former home of the provincial party; and serving as National Vice-President of the Liberal Party of Canada. This latter work took me from coast to coast in Canada, working with Liberals in every province and territory.

Outside of my political work, I volunteered with the Heart Fund, the Cancer Society, the United Way, Canadian Friends of the Hebrew University (Board member), the YMHA (Board member), the Junior League, ORT, and National Council of Jewish Women. I spent nine years on the executive of the Board of the then Manitoba Museum of Man and Nature. I was especially proud to have served as Chair of the Soviet Jewry Committee of the Winnipeg Jewish Community Council in the 1980s.

Amidst all of the community work and raising a family, I decided to launch a business. I opened and ran Pack & Post for 12 years, providing business and shipping services and supplies. It was the first of its kind in Canada; "Mail Boxes Etc." arrived four years later.

My life so far has been wonderful and rewarding. I'm blessed with a terrific marriage, exceptional children, and promising grandchildren (one girl and seven boys, in that order!).

I hope that in some way, I have made a meaningful contribution to my Jewish community, to my city, province, and country.