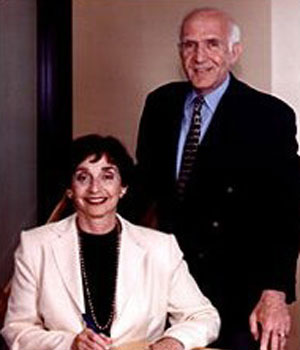 The seeds of the Hester Israels and Guy Kroft families, like those of so many others, emanate from various parts of Europe. By early this century, and even before, these seeds had taken root in Winnipeg. One of Hester's grandmothers was born in Winnipeg in 1884. Here, notwithstanding adversities experienced by most immigrant families, they established themselves and educated their children.

During the Depression, Charles Kroft married Heloise Cohn and A. Montague Israels married Sally Kalef. Things were not easy for them, but each couple proceeded to build their families and careers, thereby adding substance to our community. Monte Israels became a leader at the bar while Charles Kroft rose to become a prominent member of the Canadian and international grain trade. All four of our parents played meaningful roles in stimulating and maintaining Jewish life here in Winnipeg while distinguishing themselves as Canadian citizens. Both Charlie and Monte were founding members of the Jewish Foundation of Manitoba.

Upon these solid underpinnings, we have built our own lives, hopefully making a worthwhile contribution to the society of which we are a part. We pursued our undergraduate and graduate studies at the University of Manitoba. Hester was a teacher of gifted children for several years, and Guy practiced law until his appointment to the Court of Queen's Bench and later to the Court of Appeal of Manitoba. We both have had the privilege, at various stages of our careers, to show gratitude for the opportunities given to us by playing challenging roles in many parts of the Canadian Jewish community and in the cultural, political and philanthropic life of our country.

Our greatest satisfaction is that our children Jonathan, Deborah, David and Sarah have settled in Winnipeg with their spouses and are all actively following the tradition of participation in many Jewish and general endeavours.

We are also blessed with the beginnings of a sixth generation of the Kroft/Israels families whom we hope will carry our dreams into the new millenium.

The motto of the Jewish Foundation seems to have specific relevance to our family: "As my fathers planted for me before I was born so do I plant for those who will come after me."