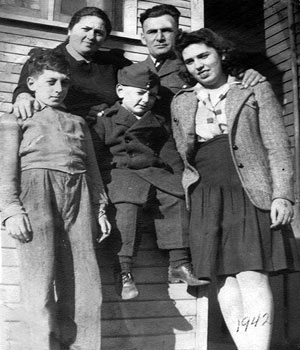 The Zentners in 1942: Joseph, Ethel, Hersch (Harry), Percy and Ruth 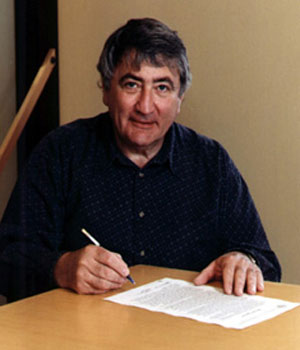 My father, Percy Zentner was born in Nikolayev in the Ukraine in 1898 and came to Canada with his father in 1911. His mother and seven other siblings remained behind and all later died in the Holocaust.

I was born in Winnipeg in 1937. I have one brother, Joseph, and one sister, Ruth. By 1939 World War II had begun and my father, a sergeant during World War I, rejoined the military and achieved the rank of regimental sergeant major. Canada was at war with Japan and it was thought that the West Coast would be attacked. Dad's regiment moved to Vancouver and, at the age of 5, we moved to our new home in Vancouver. I graduated from King Edward High School and learned the dry-cleaning business from my Dad, his alternate career to being a military man. He died when I was 19, and at the age of 22 I decided to move back to Winnipeg to begin a new life.

My new life began when I met Lillian Bober and then married her on August 22, 1961. She encouraged me to continue my education and, at the age of 23, I attended West Kildonan Collegiate to obtain my university entrance requirement. I went on to the University of Manitoba where I earned Bachelor of Arts and Bachelor of Education degrees, and then began teaching in 1964. I taught English, Anthropology and History to grades 11 and 12 and thoroughly enjoyed this career until my disability in 1992. During these years, I particularly enjoyed my work on the Executive and the Negotiating Committee of the River East Teachers' Association.

In 1988, my life took another turn when the B'nai Brith sent me on their "Holocaust and Hope Tour". Although I had participated in Jewish organizations such as the AZA, BBYO and Habonim in my youth, the reality of the Holocaust now gripped me, and a passion grew in me to raise awareness of this atrocity. I became convinced that in order for such horror never to happen again, the youth of today must understand the dangers of racism and hatred. My work on the Holocaust Awareness Committee has allowed me to compile curriculum kits for teachers on the subject of racism, and to make presentations in approximately 60 to 70 Manitoba schools a year, where together with teaching about the Holocaust, a survivor speaks to students about the brutality endured.

Everywhere I go I realize - hatred has not stopped. Only the targets change. This cannot happen again, not to Jews - not to anyone. It is the most important issue in my life. I have two wonderful daughters, Pam and Ali. I also have a grandson, Jonah.