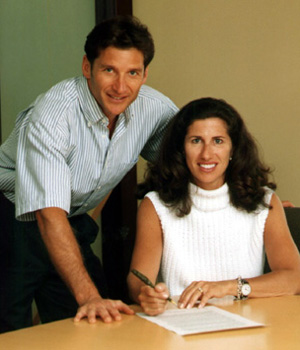 Hennie's grandparents were Beck and Henry Morton and Flossie and Morris Goldberg. Her father Percy Goldberg practised dentistry in Winnipeg, while her mother Elaine raised her family and worked as a volunteer for a variety of community organizations. Rick's grandparents were Jane and Murray Burns and Freda and Sam Corrin. His father Jack was a clothing manufacturer, while his mother Evelyn was also a community volunteer.

Hennie and Rick married in 1978. They are very proud of their three children, Matthew, Rachel and Adam. Rick practises dentistry while Hennie is involved as a committed volunteer serving both the Jewish and larger Winnipeg communities.

Rick and Hennie hope that when their grandchildren and great-grandchildren read this Book of Life biography some day in the future, it will give them a strong sense of the heritage that has been handed down to them, and an appreciation and understanding of the importance of sustaining Jewish life in Winnipeg.