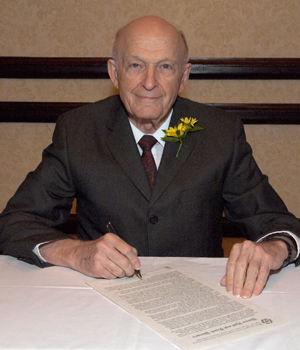 Henery Fineberg signs his story for the Endowment Book of Life 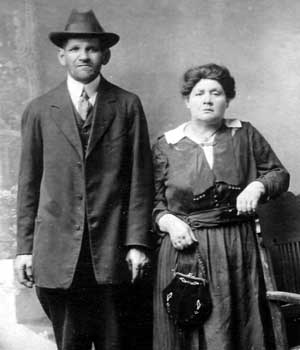 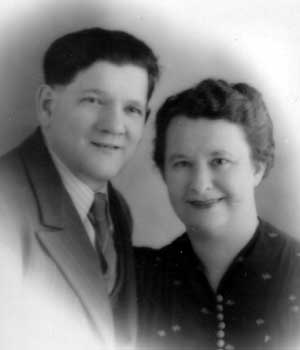 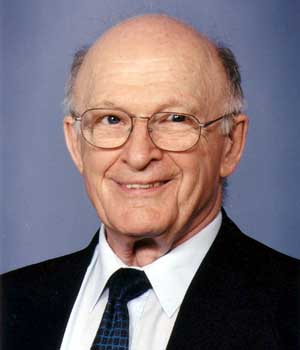 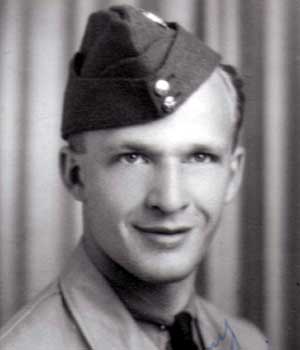 Henery Fineberg in the Air Force

I was named Henery Levi Fineberg with my Hebrew name being Chaim Leib ben Aaron ha Levi; named after my great grandfather. I was born 23 May 1921 in Winnipeg, the first of three brothers; Morris born February 9, 1925, died Dec. 30, 1996; Samuel Mendel born May 20, 1931, died Sept 9, 1936. My grandparents and parents were born in Europe. My paternal grandparents were Abraham Avigidor and Hode. My maternal grandparents were Max Roth and Marie Groh. My parents were Aaron (Arthur, Archie) born in Belarus and Catherine (Sarah) born in Germany. They all emigrated to Glace Bay in the late 1800's and early 1900's. After my mother converted my parents were married in Montreal and later moved to Winnipeg.

In 1926 my father purchased a defunct die cutting business. His first product was the "C Rite" frost shield which he invented, trade marked and patented. From then onward the company produced peaks, plain and printed from celluloid and other materials for cap makers and later for internal sewing operations. Following that came painter's caps and carpenter's aprons. Pre-war, a line of house slippers made from felt, leather and shearling for men, women and children were added. After the war, work was also done for the military. The company went through three name changes: The Canada Die Press Co.; Fineberg Manufacturing Co; and Finberg Manufacturing Co. Ltd. As it grew, it moved 4 times, ending up on Good Street with the family home abutting on Colony Street.

I worked at the plant from childhood until 1959 except for almost three years of war service. My brother also worked in the plant from childhood on until 1942, when he was forced to stop school and work full time in the factory. My first school was King Edward which terminated in grade 7 at Christmas. Then I was transferred to Machray School and then to St. Johns High School where, because of lack of money, I took the Industrial Training and graduated in 1938.

I enlisted as an Instrument Mechanic in the Air force in January 1943 because of my industrial high school training. I served in Canada until the end of the war and then was discharged.

In 1956 I married and three children and 13 years later was divorced.

In 1959 I was hired by the Department of Fisheries as a Federal Fish Inspector to check Whitefish for parasites before export. When Mercury and Botulism poisoning problems arose I felt I needed more training. I was granted University and completed my BSc degree. In 1970 I was promoted and sent to Toronto and became Manager of Field Operations. I had seven offices in various areas, staff, a great number of fish companies and four or more export ports to monitor. When I arrived the fish plants and vessels literally stank. I also wore a number of other hats. I ran a subsidy programs for the construction and improvement of fishing vessels, an insurance program for fishing vessels and was the fisheries representative on the TB/Union contract negotiating team. I was reasonably successful in all these endeavours. I retired in 1986 and spend my time travelling. During the second week of August 2007 I travelled to the north shore of Lake Erie after 21 years absence and was delighted to find that the fishing vessels and plants were still using some of the practices I put in place, and were clean with very little odor. For more specific details read my biography.