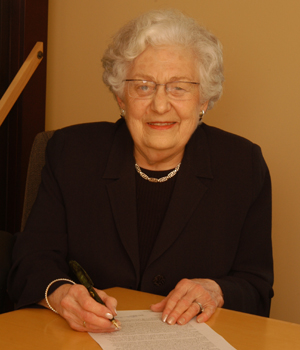 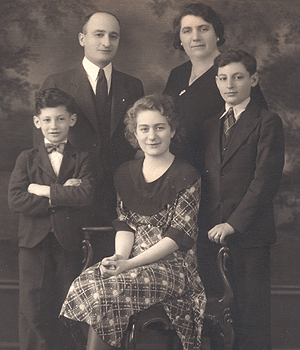 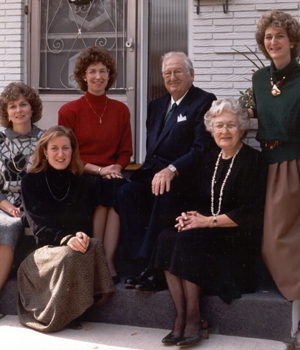 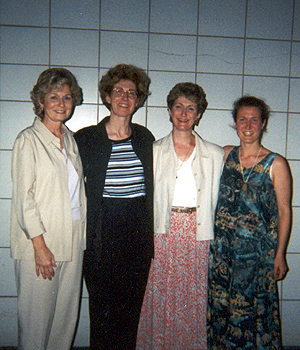 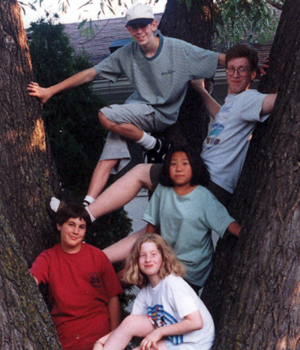 I was born in 1920. When I am asked where I was born, I have to qualify the statement by saying, "yes, I was born in Winnipeg but I lived and grew up in Plum Coulee." My mother came to Winnipeg to have her babies in my grandparents' home and after a few weeks she would return to Plum Coulee.

Her parents, John and Bessie Kluner arrived here from Russia in 1890. My mother Sarah, who was born in Winnipeg in 1900, was one of five children.

My father Jacob David Diamond arrived in Canada from Volinsk Novograd, Russia in 1908. He went to Plum Coulee to work in a general store owned by Rosner and Brownstone. After approximately ten years he established his own general store and also bought the Queen's Hotel next door which was no longer in business. He had part of the hotel dismantled and the rest made into a home for his bride, Sarah. My parents were married in 1919. In 1928 when prohibition was over, my father refurbished and re-opened the Queen's Hotel.

Although my brothers Harold and Lazar and I were brought up living in the hotel, it was remarkable that my parents by their own example were able to instill healthy values in us. My parents were actively involved in the community and encouraged us to participate in whatever the community had to offer. We even attended church Sunday school on occasion and certainly participated in the Christmas concerts at school. In spite of that we knew we were Jewish. Our family always observed Chanukah, Purim, Passover and the High Holidays.

I completed grade eleven in Plum Coulee and went on to United College, which is now the University of Winnipeg, for grade twelve. Since I was too young to enter nursing I went on to the University of Manitoba for my Bachelor of Science Degree and then entered the Misericordia School of Nursing in 1940. While at university, I was involved in extra-curricular activities such as basketball the Manitoban Newspaper, and was president of the Delta Phi-Epsilon Sorority in my final year.

My three years in nursing training were a high point in my life. Although it was physically demanding, it was also most rewarding. I stayed on staff at the Misericordia for two years as Head Nurse of Obstetrics. I had planned to take a post-graduate course in Public Health Nursing, but fate intervened. I met my husband Maurice Kahane and after a brief courtship we were married in August 1945. We became members of Shaarey Zedek Synagogue and Rabbi Solomon Frank officiated at our wedding.

At the time of our marriage Maurice his father and his brother Jack where partners in Kahane Of Canada Ltd. creating toiletries and cosmetics, as well as Devonware Ltd. manufacturing figurines and giftware. Later on, he became the sole representative in Canada of a number of American lines in the field of decorative accessories. His company was called Gaylord Ltd. This took him away from home for weeks at a time.

I would join him periodically when our daughters were older and especially after 1975 when he decided that rather than flying from one major city to the next, he would motor so that he could stop "to smell the roses" and enjoy the beauty of this magnificent country. We had been to the West Coast in blossom time, over the prairies in harvest time and at the East Coast along the Cabot Trail when the maples are in all their glory. Life was always an adventure traveling with Maurice whether in Canada, the U.S. or overseas. Unfortunately our travels came to an abrupt end when after a brief illness, he passed away in January 1989.

We have four beautiful daughters (Barbara, Ruth, Debra & Joan) and I truly enjoyed them as they were growing up. They were always a source of joy and wonderment to me. Now I have sons-in-law and seven grandchildren whom I love dearly. The girls, school activities, swimming, skating, Brownies, Girl Guides, B'nai Brith girls, USY, Hebrew school and the girls' Bat Mitzvahs kept us busy. But somehow in between, I managed to get myself involved in my own activities.

We lived close to the River Height Community Centre and since the girls went there for skating, I found myself suddenly chairman of figure skating and finally, president of the Women's Auxiliary. This was at the time we had our major fundraiser for a new building, which is in use to this day.

I was also involved in NCJW, Shaarey Zedek Sisterhood and Brandeis chapter of Hadassah-Wizo. By 1950 I was president of Brandeis chapter and shortly after that I held many other positions on the council level of Hadassah-Wizo. I became overall president from 1980-82. At that time we still had 21 chapters in Winnipeg. We organized many interesting projects, too numerous to mention., we faced many challenges and enjoyed many learning experiences and accomplishments, all with a feeling of gratification that the funds we were raising were in some measure helping the State of Israel. By creating funds through our many projects, we were assisting in the education, health and welfare of hundreds of women and children in Israel.

Perhaps because of our involvement in the Jewish community, our affiliation with Shaarey Zedek and our observance of Jewish tradition in our home, our daughters have maintained their Jewish identification and affiliations. It was important to us that we live in a Jewish community where our daughters would have Jewish friends and classmates. Now that they do not live in Winnipeg, I believe that they appreciate how fortunate they were to grow up here.

By my participating in the Endowment Book of Life, it will in some small measure assist in maintaining Winnipeg as beautiful and healthy a community as it has been in the past.