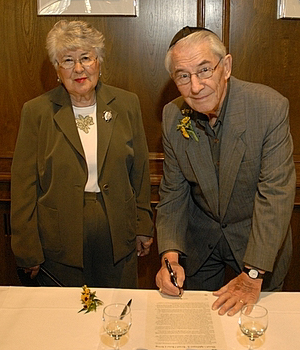 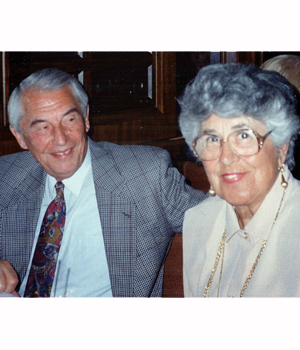 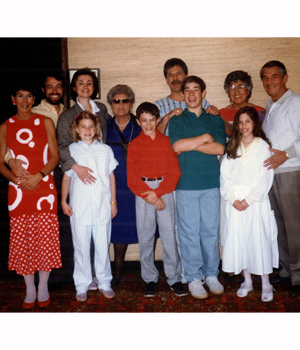 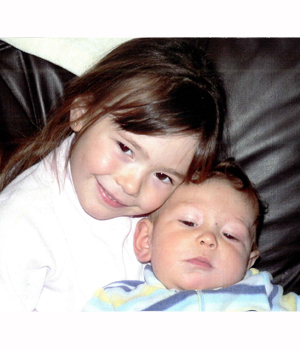 Hazel arrived in Winnipeg as a five year old child and Issie as an adult transplanted from Montreal, but they both feel an appreciation of and a responsibility to the Winnipeg Jewish Community. The Endowment Book of Life is an opportunity for them to give back to the community.

Hazel is one of two children (her brother is Allan), born to Chaim and Gitel Adelman who came to Canada for a better life than was available to them in Russia. For Hazel the boat trip to Canada had two memorable events - one was her 'on-board tonsils operation' and the other was this enormous Christmas tree that she remembered forever. Her father, who occasionally travelled to South America for business for extended periods, arrived in Canada shortly after, so that meeting him again as a five year old required Hazel to start this relationship over. Her memories of her father are of a hard working peddler with a horse and wagon, who tried very hard to support his family. Life as peddler would eventually move him towards the used furniture business.

With Chaim was Gitel, a beautiful woman with a 'love of life and a people personality.' Gitel managed the home. Hazel attended Machray School and graduated from St. John's High School. She had many friends but would describe herself as a shy teenager. She had a good home life and for many years was active in Hadassah. While on a trip to Montreal to visit her cousin Eddie Flomen, Hazel was introduced to Israel Oiring, her future husband.

Issie was one of two sons born to Isadore and Sonya (Blatt) Oiring. He left Russia as a three year old and arrived in Montreal, and remembers that life was hard. His father worked as a fur cutter and money was scarce. Added to the problem was the anti-Semitism that Issie experienced. As an excellent student his plan was to become a medical doctor, but finances and quota restrictions redirected him to an education in commerce. In retrospect this was probably very fortuitous as Issie was always entrepreneurial.

As a young adult Issie started his career working in a fur wholesale selling to the fur manufacturers and excelled as a fur buyer in the fur auctions, actually becoming the youngest fur buyer in Montreal. It was during this time that Issie met Hazel and she began a series of trips to Montreal. It was on one of these trips that Hazel met Issie's brother Morris who was home from military service. This chance meeting would be the only opportunity that Hazel had to meet Morris as he was killed in a torpedo attack as he was returning to his post.

Hazel and Issie married in 1945 at the Hebrew Sick Benefit and then returned to start their life together in Montreal. An opportunity in 1946 to open a fur wholesale as a partner with a major fur manufacturer, required a five thousand dollar start up investment from Issie. This opportunity changed the course of their lives. Hazel's father, rather than loaning Issie the money, encouraged his son-in-law to relocate to Winnipeg and join him in his used furniture business. As they say the rest is history as Issie quickly entered into new furniture and began traveling the country looking for product as demand outstripped supply.

As the Oirings tell their story they are quick to say not to spend a lot of time on that aspect of their lives other than to mention that business was a rollercoaster ride, luckily with more highs - Penthouse and Birchmont Furniture - than lows. After the furniture business there were other successful entrepreneurial adventures, but now is a time to reflect upon their lives.

After all is said and done the Oirings believe that family is the glue that keeps people together. When Hazel and Issie moved to Winnipeg, Issie's parents were not willing to lose daily contact with their only remaining son and they too moved to Winnipeg. It is this importance of family that the Oirings have hoped to pass on to their children, Murray (Carol) in Calgary and Rochelle (Marshall) in Winnipeg and their four grandchildren, Michael, Ian, Rebecca & Meka. They are now blessed with two great grandchildren, Abbey and Aiden Oiring.

They wish their grandchildren health and happiness; everything else they can handle. As advice they remind younger people to spend time with children, their best investment. For Winnipeg they want to see the continuation of growth in the Jewish community. In terms of their own lives they both recognize that they are each other's best friend and have been very good for each other. Although it is sufficient to be remembered as good people they do realize that they each have their own particular characteristics. Issie sees himself as a romantic while Hazel attempts to lead her life as a good mother and a considerate friend.

In conversation they reveal that they believe that it is the responsibility of those that can, to assist those that need. A planned gift to the community will be their way of making our community a more caring place.