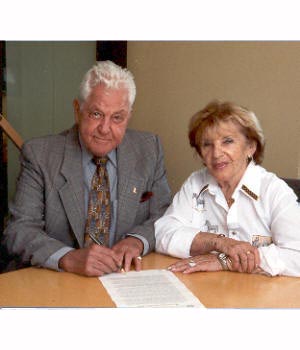 Harvey and Sima sign their Endowment Book of Life story 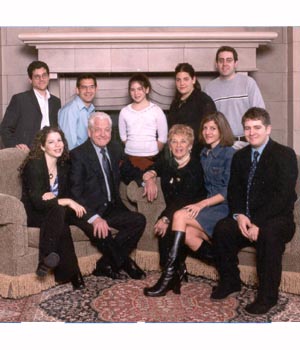 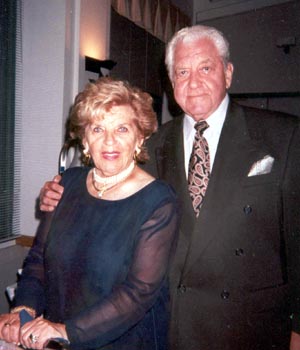 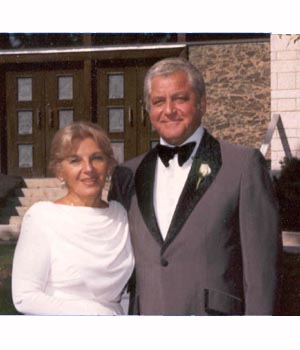 Harvey and Sima Kay ... as portrayed by Harvey on behalf of Sima and myself.

Our story is not our legacy. Although we are happy to make a financial commitment to the Jewish community, this also is not our legacy. In fact, our legacy is in our family - our children and grandchildren who are wonderful individuals who contribute to their communities. We, Sima and I, acknowledge this fact with great pride.

Sima's parents, David and Anna (nee Trachtenberg) Rosenbaum were both born in Kiev and were married enroute to Winnipeg in London, England. They raised five children, Harold, Irvin, Eli, Hattie and Sima.

Sima and I grew up in Winnipeg's north end. I attended at David Livingstone and Luxton Schools, and Sima at Machray, with both of us eventually going to St. John's Tech. After Sima and I were married on January 17, 1942, I joined the RCAF and the war effort

Our first son, Neil, was born in 1943, he is married to Rhoda Goldman and now specializes in haematology and oncology at Mayo Clinic in Rochester, Minnesota. Our second son, Ian, was born in 1945. After completing his Doctoral thesis in English literature at the University of Western Ontario he joined the family company. Ian is married to Susan Kaplan. Our daughter Robin was born in 1950 and went on in life to make a career in the production and designing of fashion-wear.

My father, determined to build a life in Canada, chose to change our family name to Kay. He used the skills he acquired from his father to become a successful cooper, a barrel builder. He could create a beautiful watertight barrel from a log and dried reeds. The Winnipeg Cooperage Co. Ltd. was, thus, established in 1917 and I joined my father around 1936, learning the craft, and developing sales and marketing skills throughout the Prairie Provinces. I began to expand our business, not just for wooden barrels which were used in the packaging of foods, spirits and chemicals, but also for steel drums, metal pails, tin and eventually plastics. In 1977 our company changed its name to Kay Containers Ltd. to accurately reflect the great diversity of products which grew out of the simple, yet elegant wooden barrel. As a matter of fact, all of our cooperage tools were donated to reside in the archives of the Manitoba Museum of Man & Nature.

Our family has always enjoyed being involved in the Jewish community organizations and in sports activities. I have the honour of being a Past President of the Maple Leaf Curling Club, Glendale Golf and Country Club, the Founding President of River Heights B'nai Brith, a Lifetime Associate Member of Hadassah Wizo, Past Master and Honourary Life Member of my Masonic Lodge and a Past District Deputy Grand Master. Sima has enjoyed her work in Hadassah, the National Council of Jewish Women, the Shaarey Zedek Brownie troupe, and her volunteer work at hospitals and other community activities and events.

We are very fortunate and proud to be living in a community like this, which is marked by a steadfastness and a strong communal spirit unique to our city. When we celebrated our Sixtieth Wedding Anniversary, Sima and I decided to use this occasion to give back to our community. Thus we established the Harvey and Sima Kay Scholarship Fund at The Jewish Foundation of Manitoba. This Fund is designed to provide annual scholarships for Manitoba students attending the Hebrew University of Jerusalem as well as scholarships for students graduating from Joseph Wolinsky Collegiate for their university entrance.

Sima and I have eight grandchildren: David, Jackie, Joseph (married to Lori), Aaron, Jacob, Brooklyn, and Zoe. We are very proud of them and hope that our younger generation follow our footsteps by participating in the life of their community, by being involved in tzedakah and, above all, by being respectful of others. In other words, it is not so much as being Jewish, it is being "mentschlach". We hope we have led in some small way by our example and it is with the spirit and promise of this hope that Sima and I say, "Our legacy is in our family ... our children and grandchildren..."