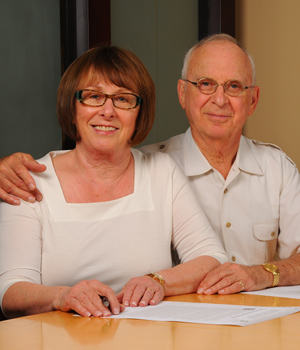 Sam Pollock, my father, escaped from Russia in 1927 together with my mother Sluva ("Bubbele") and two children, Myra and Mischa. He worked as a bread man for City Bread for one year during which time my brother Gordon was born. The Weidman brothers, grocery wholesalers, generously sponsored Jews to open stores in the country, allowing them to purchase inventory on credit. My parents opened a store in Bethany, Manitoba, eight miles from Minnedosa. Two more children were born there — my sister Cecilia and me.

Although my father was educated in Yiddishkeit and was a student of the Talmud who loved poetry and philosophy, that life was not to be in Bethany. There were no Jews, the closest family being the Aspers of Minnedosa. My father needed to make a living to support his family. He bought furs, eggs, seneca root — anything he could sell for a profit. He later bought cattle, and then land, and eventually became a successful farmer. He was a good businessman who never bought on credit, a person of honesty and integrity. He became someone whom others sought for advice. My mother had been educated at the university level (in the "gymnasium"), but she spoke no English and with no other Jews, she felt isolated and battled feelings of insecurity. She worked alongside my father and gradually they endeared themselves to the community. In the meantime, my mother educated herself in English, both written and oral.

I attended country school for grades 1 to 4, and on February 5, 1944, while my father stayed behind to continue the cattle business and farming, the rest of us moved to the city for better educational opportunities. I attended Machray School and St. John's Tech. I belonged to the "Trojans" club at the Y, and made many life-long friends.

I graduated from the University of Manitoba Law School in 1957 and was called to the bar in 1958. I served as counsel to the Children's Aid Society of Winnipeg for three years, then worked for Hart Green Sr. and Jr., and then opened my own practice. A. Montague Israels Q.C. gave me office space until I could afford to pay rent. I was married at the time with two children and money was scarce. I am grateful to the late I.H. Greenberg, Q.C. of Portage la Prairie, Manitoba for whom I acted as counsel and who gave me the opportunity to grow as a lawyer. Mr. Greenberg died in 1972 and I continued on with his son David until 1982. I have now practiced law for over 50 years and it has been a very exciting career. I have looked forward each morning to going to work and have found the day too short. I have practiced and continue to practice civil and criminal litigation. My preferred specialty is medical and other professional malpractice. I was appointed a Queen's Counsel in 1970.

Having acted in many matters affecting the rights of First Nation peoples, in 1971 I had the great privilege of being made an Honourary Chief of all the First Nations Bands in Manitoba. I was given the honourary aboriginal name — "Si-Naki-Tonem", meaning "he who interprets difficult meanings."

In 1994, I received an Honourary Degree from the Manitoba Society of Certified Engineering Technicians and Technologists.

In 1977 I received recognition of a different sort when I performed Swan Lake and Eine Kleine Nachtmusik in the first World Whistling Competition in Carson City, Nevada, which I won. This led to some film work, TV appearances, as well as opportunities to whistle with the Winnipeg Symphony Orchestra, the Toronto Symphony and the Bismarck Symphony, not to mention countless small town fairs and variety shows!

Through all these activities, I have had the support and encouragement of my dear wife and family. Sylvia (Friedman) and I met in university in 1953. I knew from the moment I saw her that I was going to marry her. We came from similar backgrounds and our connection within each other's families was immediate. It was very special to me when Sylvia's father, who I loved, gave me a large briefcase saying, "You're going to need this!" His prophecy was well founded. I carried that briefcase for many years until it could no longer hold my files and books.

We married in December, 1954 and had three children — Karyn, Martin and Nathan. Karyn is married to Daniel Globerman and they have three children — Adam, Noah and Simmie. She is a physiotherapist and he is a psychiatrist. Adam is now a physician, Noah is in law school, and Simmie has graduated from university. Martin graduated from Dalhousie Law School in 1985 and is a fine lawyer, in practice with me. He is married to Randee (Forrester), a social worker, and they also have three children — Ethan, Jesse and Jayden. All three want to be lawyers! We lost our son Nathan on November 13, 1982 when he was killed by a drunk driver. Nathan's loss was devastating to us all. He was a sweet and kind human being and we often think "what could have been..?" Sylvia and I became very active with Citizens Against Impaired Drivers (CAID, later MADD) and I persistently lobbied government to ensure that driving and drinking laws were changed, both Provincially and Federally.

Today I continue to work hard. I am presently involved in an intriguing project involving new agricultural technology which will ultimately, economically and otherwise, benefit the agriculture community... my father having been a farmer, in reality it is coming full circle. It may very well be my legacy.