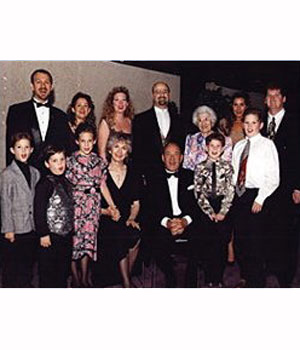 Hartley, President and C.E.O. of Winnipeg Photo until his retirement in 1996, is a product of Winnipeg's once thriving North End Jewish community. Born in the city in 1933, he and his sister grew up in the family residence at 386 Aikins Street. Hartley's parents, Harry and Anne, immigrants from Europe, were ardent yiddishists - more secular than religious people. They were active in many aspects of Jewish life and encouraged Hartley to respect and value Jewish traditions and to identify positively as a Jew. As a child and young adult, Hartley belonged to the Y.M.H.A., and was active in Hillel and the Alpha Epsilon Pi Fraternity. He was educated at Peretz, Machray and St. John's High schools, University of Manitoba, and Manitoba Law School.

Hartley married Ruthy Erlichman in June, 1955. They have four children: Sheldon, David, Susan and Lisa. Together they have built a strong family unit, respecting and honoring the past generations of their families, and committed to the present extended family.

Their dedication and hard work led to the expansion and success of Winnipeg Photo. This success enabled them to be generous supporters of Jewish causes both here and in Israel.

Among Hartley's many interests and activities, the Chai Folk Arts Council and the Buck Rogers Group stand out. Hartley served as President of the former and Chairman of the latter. He has also been a member and supporter of Congregation Rosh Pina.

By signing the Endowment Book of Life, Hartley has expressed his concern for the future of the Winnipeg Jewish community and his faith in its viability and vitality. In his own words, he expresses his fondest hopes as follows:

"Our Jewish heritage must continue to be remembered and nurtured. All aspects are important - family, community, education, and the quality of life. My message to my family is the sincere wish that they always respect the good name with which they have been blessed."