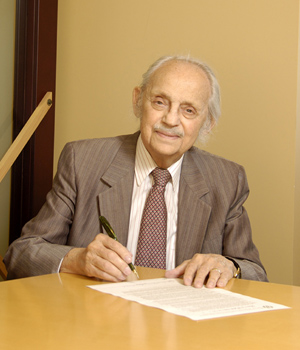 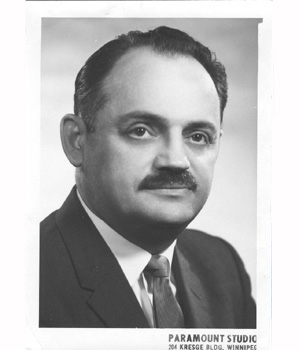 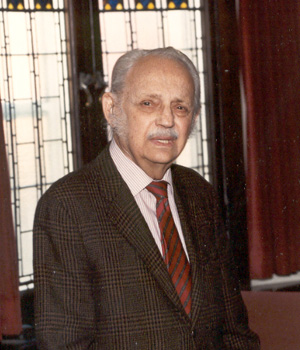 Newsie, golf caddy, candy maker, lawyer, civil litigator, jury trial expert, social activist, public speaker, defender of the downtrodden, community builder - Harry Walsh has lived a long, full life replete with adventures, new experiences, challenges, victories and achievements. It has been a life lived very much in the service of others and very much to the benefit of the Winnipeg Jewish community, the community in which Harry was born and raised, and in which he has gladly built his home, his practice and his life.

Harry's father, Ze'ev Philip, escaped pogroms in Bobrovikut, Russia, and settled in Old Kildonan at the turn of the last century. He purchased two cows and a horse and began delivering milk to householders in Winnipeg's north end. A year later, he sent for his wife, Faigel Mastensky (Mastitz), and their two daughters, Sally (Stern) and Betty (Tabachnik).

As the family grew to include Harry, Ernest, Sam, and Perry, they moved from their dairy farm on to Selkirk Avenue, where the kitchen dishes rattled every time the streetcar passed. It was from here that Harry fought his way every evening to cheder at the small Talmud Torah on Magnus and Andrews, where his teachers were Messrs. Krindle and Kowalson.

Harry began his working life at age 12, selling the Free Press and Tribune newspapers for five cents a copy on the corner of River and Osborne. He also worked as a caddy at the exclusive St. Charles Golf Club, where no one knew he was Jewish. After high school at St. John's Tech, Harry attended the University of Manitoba, graduating with a Bachelor of Arts in 1932. He then took a year off his studies to work in a candy factory for $5 a week, so that he would be able to pay the $125 annual law school tuition.

Harry entered law school at the University of Manitoba in 1933, and began articling with The Honourable Edward James McMurray K.C., a former Solicitor General in the Cabinet of Prime Minister Mackenzie King. The law firm, McMurray and Greschuk, became known as McMurray Greschuk and Walsh, when Harry was called to the Bar in 1937. A year later, it became McMurray Greschuk Walsh and Micay. When E.J. McMurray passed away, it became known as Walsh, Micay and Company, and employed 27 lawyers.

While Harry specialized in criminal law, his professional activities always extended beyond the day-to-day practices of law. Early in his career, he helped form the Jessel Club for Jewish lawyers when he learned that the esteemed Blackstone Club, at which he had once been invited as guest speaker, did not allow Jewish membership. He also was the founder and first president, with Israel Nitikman, of the Manitoba Legal Aid Society. He later served as chairman of the Criminal Justice Section of the Canadian Bar Association and of the Judicial Council of the Law Society of Manitoba.

Harry was named a Queen's Counsel in 1953, and in 2000, was named one of the top 10 Manitoba lawyers of the 20th century. To date he has been practicing law for 67 years, making him the longest practicing lawyer in Manitoba, and the only Canadian lawyer privileged to practice in five provinces and the Northwest Territories.

Harry served as co-chairman, with Art Maloney, of the Committee for the Abolition of Capital Punishment in Canada. On August 25, 1975, the Resolution for the Abolition of Capital Punishment, proposed by Harry Walsh, was passed by the Plenary Session of the Canadian Bar Association in Quebec City. The Canadian Parliament abolished capital punishment on July 16, 1976. This was hailed as the most important piece of legislation in the 20th century.

As vast and unsurpassed as are Harry's law related achievements, he is equally renowned for his work on behalf of the Winnipeg and larger Jewish communities. He has served as president of the Jewish Welfare Fund, the Jewish Children's Home and Aid Society, the Jewish Youth Centre and the YMHA, and was a founder of the Glendale Country Club. Harry is a life member and the honourary solicitor of Glendale. He and his wife Irene visited Israel 33 times, primarily as founders of the Winnipeg based Canadian Associates of Ben-Gurion University of the Negev. Harry is a world governor, for life, of the Ben-Gurion University of the Negev.

Harry is the founder of The Jewish Foundation of Manitoba. He drafted the Foundation Agreement which was artistically designed and crafted by a Hebrew scribe. The signatures on the document were then obtained by Harry and his two consultants, David Slater and Al Bricker. Each signer paid the sum of $100.00. Over $10,000 was collected and the first grant was paid to the Foundation.

Harry's sister, Sally, is the widow of Samuel Stern. Samuel, who passed away in 1966, was the owner of Winnipeg Motor Products. He provided funds for the first children's day camp at Middlechurch. Sally is renowned as one of the foremost members of Hadassah. Her son, Ronald, who resides in Vancouver with his wife, Janet, and two daughters, Cylena and Pauline,is the principal owner of the Winnipeg Free Press.

All four of the Walsh brothers served in World War Two. Ernest, who passed away in April, 2004, was a sergeant in the RCAF for six years, serving overseas for most of that time. Sam, who lives in Edmonton with his wife, Millie, was a corporal in the South Saskatchewan Regiment and was wounded in action in the Italian Campaign. Perry, who passed away 13 years ago, served in the Navy, stationed in Halifax. Harry was a lance-bombardier in the Royal Canadian Artillery, serving in Petawawa and Barriefield, Ontario.

Harry has two children. His son, Paul Victor Walsh, Q.C., with whom Harry now practices law, is married to Beryl. Harry's daughter, Arlyne Walsh, lives in Toronto. Harry's grandson, Zachary Walsh, will be graduating from Chicago University with a Doctorate in Forensic Psychology, and his granddaughter-in-law, Tiffany attends law school in Chicago. Harry's two granddaughters, Rachel and Abigail live in Toronto, where they graduated from York University.

Harry's first wife, Ruth, passed away at an early age. In 1964 Harry married Irene, who passed away in 2002. Irene was a graduate of Belgrade University, a linguist and radio announcer who broadcast in Russian from Jerusalem to Moscow for many years, urging Russian Jews to settle in Israel. She inaugurated the Art Museum at Ben-Gurion University, and fundraised to enable needy immigrants to study at Ben-Gurion University. For many years she served as chair of Winnipeg's Israel Bonds Ladies' Committee.

Harry is proud of what he describes as a 'wonderful' Jewish community and the way in which it has developed over the years.


Compiled by Sheldon Mindell, Director of Endowment Development for The Jewish Foundation of Manitoba.