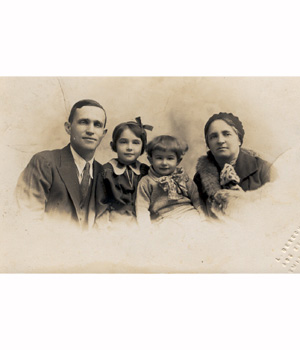 Moishe and Freda Rubinfeld with their children Toby and Harry 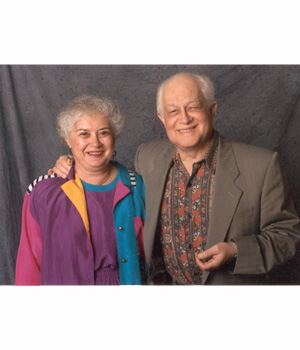 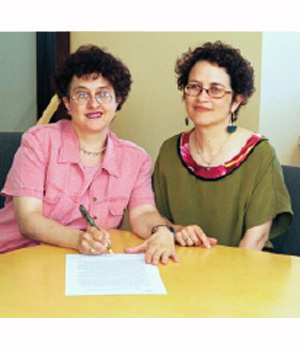 Harry Rubinfeld, the younger child of Moishe and Freda (Greenbaum), was born in Winnipeg in 1930. His parents came from the Gallicia region of Poland from a town called "Uzchezkidolnya". His mother Freda [1893-1975] was an extremely bright woman who spoke seven languages fluently and had a sharp, ascerbic wit. Some of her early adult endeavors were highly unusual for a young woman in the early part of the last century: she participated in a pro Zionist demonstration (for which she was thrown in jail for a night) and she also went to university for a year.

Moishe, Harry's father, [1898-1996] was warm and gregarious, with a great sense of humour, an extremely generous nature, and an infectious "joie de vivre". Moishe saw Canada's call for farmers as an opportunity to leave the poor shtetl behind and forge a better life for his family. He left for Canada in 1926 and worked hard to afford to bring over his wife and daughter Toby to Winnipeg in 1929. They settled on Stella Avenue in Winnipeg's culturally-rich North End, so when Moishe opened up a vegetable peddling business, he naturally called it "Stella Produce". He was one of the first people to have the foresight to realize what an advantage a truck would be over his cart and horse, and this was the first step on the road from vegetable peddler to owner of a flourishing vegetable packaging warehouse.

Moishe was generous "to the core". He was very active and took leadership roles in the "Polish-Jewish Farband", the old Beis Y'Acov Shul and the Rosh Pina Synagogue. But arguably his most generous contribution to society was bringing over many of his "landsmen" to Winnipeg in the desperate 1930's and immediately following the war. To facilitate the immigration process, Moishe developed a strong bond with immigration officer Mr. Munroe. Harry would run into many people in his life who reminisced about the times they and their family lived in the Rubinfeld household (for a month at a time or more) until they were able to strike out on their own.

Harry grew up in Winnipeg's North End, and graduated from St. John's Tech. The boyhood friendships he cultivated remained loyal and strong throughout his life. He met Doreen Rittberg and married her in 1956, at the recently built Rosh Pina Synagogue on Matheson Avenue. Together, they raised three daughters, Sandy, Renee (Billauer) and Andrea (Levy). The grandchildren provided Harry with an unceasing source of joy, hope and delight.

Harry joined his father and partners at Stella Produce in 1957. Over the years, the produce industry saw many changes. Harry helped Stella Produce adapt, and initiated the modernization of the business by introducing the first produce packaging machine to Winnipeg. He was keenly involved in the industry and served terms as President of the Manitoba Fruit and Vegetable Growers' Association. Harry at all times conducted his business according to his strong code of ethics: he was honourable, loyal and fair, and this integrity won him many loyal friends and associates. Harry was fondly known to his many friends in the industry as "The Potato King of Western Canada."

Harry played a key role in some memorable community events and initiatives: an avid golfer, he was a primary founder of the Bel Acres Golf Course. He was instrumental in coordinating both the YMHA Reunion in 1980 and the St. John's Tech 75th Anniversary Reunion in 1985. Harry, an active member of the Hebrew Fraternal Lodge for many years, served two terms as President. He was also fund-raising chair of several community organizations, including the Shalom Home Residence, and actively fundraised for Israel Bonds and the Jewish National Fund.

Like his father, Harry had a wonderful sense of humour, and exuded a natural charm and a warm charisma. He was a strong believer in forgiveness and reconciliation. We fondly recall how our father taught us important rules to live by, such as "it takes two to tango." He was a firm believer in family bonds, and encouraged us to develop and strengthen ours. We are particularly proud of his kind and unfailing generosity on every level - from the many organizations and causes he supported, to his immediate and extended family members.