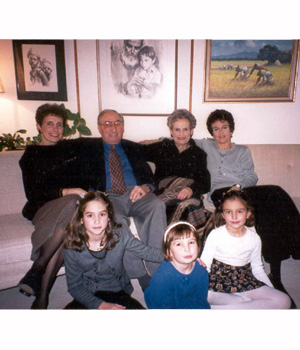 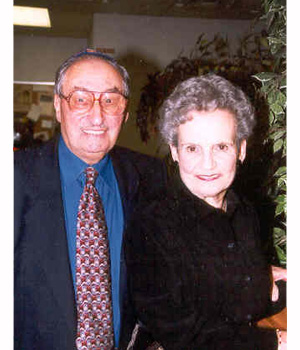 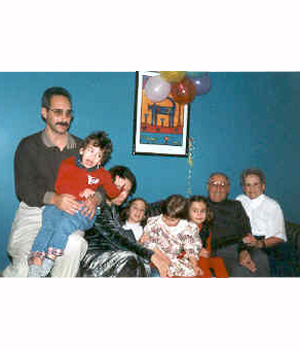 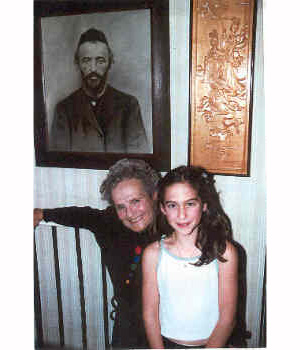 Laila and granddaughter Zoe at Passover 2000, photo of great-great Zaida in the background 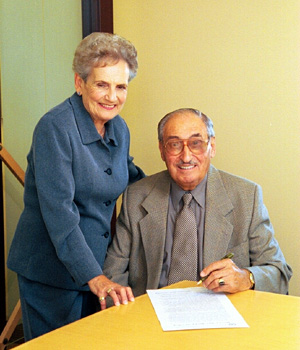 Harry and Laila sign their Endowment Book of Life story

Both individuals have separate stories until 1950 when they married and began a life that is marked by the time they spend together and the experiences they share.

Harry was born in Winnipeg in 1914 and spent his childhood and adolescence in the north-end living on Stella, Disraeli and Manitoba while attending King Edward, Norquay, Aberdeen and St. John's schools. Harry grew up with a strong sense of Judaism that was fostered by what went on in the home. His parents, Louis and Sarah (Azriel) arrived in Winnipeg from Russia and Poland respectively. Harry remembers his father as strict but loving, while he describes his mother as quiet and reserved. Louis supported his family first as a cattle-dealer, grocer and then as a country merchant (1930-44) in Saskatchewan. The family returned to Winnipeg when Harry returned from serving overseas in World War 11 and showed no interest in returning to a life in small town Saskatchewan. At the same time Harry's brother David was finishing law school and heading out to the west- coast. After looking at different opportunities Harry was a partner in Sterling Agencies, a giftware operation for thirteen years until he joined Athlete's Wear for a career of over thirty years.

Laila was the first daughter born to Baruch (Barney) and Esther (Bookman) Barsky. Her father arrived in Canada from the pogroms in Russia from which her paternal grandparents did not survive. Her mother came to Canada from Russia around 1900 as a child and the family settled in Plum Coulee before moving to Winnipeg. Laila's parents were initially quite successful financially but when the depression hit the family moved to rural Saskatchewan where her sister Naomi was born. The family was a priority to Laila's father, while her mother was a supportive wife who enjoyed an excellent relationship with a loving husband. When Laila's brother Percy was ready for medical school the family moved back to Winnipeg where the family business started to improve.

In 1950 Harry met Laila and they married. They have three children and four grandchildren. All of their children, Jackie in Toronto, Garry and wife Cathy in Vancouver and Karen and husband Dale are all involved in some form of education. This may be due to the importance that the family placed upon the educational process. Laila was a teacher's aide long before the position became popular. While Harry was involved and managed Athlete's Wear, Laila left the school system and became a district manager with the World Book Encyclopedia Company where she constantly was recognized for her sales achievements. Her parents were ardent Zionists and this led Laila first to Habonim as a teenager and then to the Pioneer Women as a young adult. She was the driving force behind the creation of the Golda Meir chapter. She was sent to New York to be trained in recruitment and training of new members for Pioneer Women.

As a married and now retired couple, Harry and Laila spend a great deal of their time doing community volunteer work. Attending synagogue and Shabbat services is a regular ritual for both of them. For their 50th anniversary Laila did the Haftorah as a symbol of the importance of Judaic activities in their life.

They relish the time they have to spend together, volunteering, exercising, and traveling. They have visited Israel five times, three times on a work experience project. Laila's only solitary activity is as a runner, which she has enjoyed for over twenty years competing in five marathons and countless other races.

They both hope that they are remembered as good Jews and loving parents. They speak fondly of the Winnipeg Jewish community and hope that it continues to thrive.