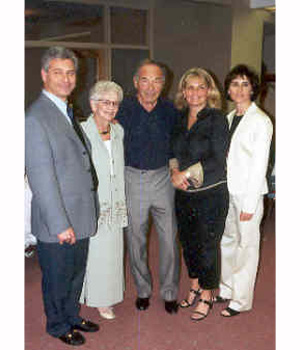 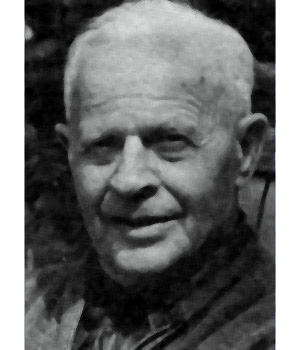 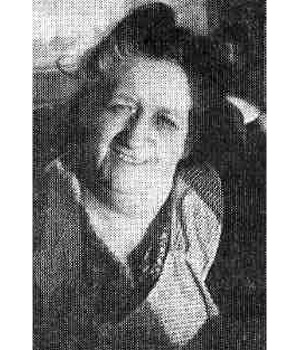 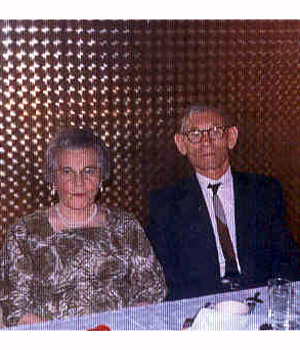 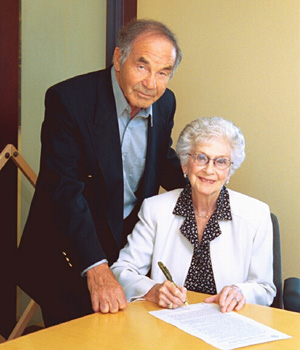 Harry and Becky sign their Endowment Book of Life story

The Rosenberg's feel privileged to be able to participate in this program as it allows them to give back to the community that means so much to them while allowing for the maintenance of a family history.

Harry's father, Morris arrived in Canada in 1910 from Russia and earned his livelihood from a combination of cattle dealing and retail merchandising mainly in Saskatchewan. Harry's mother Esther also arrived in Canada from Russia but not until 1921. Memories of his parents include a father who was always optimistic, good-natured with a love of music only rivaled by his wife's love of family. Growing up in small towns in Saskatchewan, the Rosenbergs were often the only Jewish family in the community. All of his Jewish training was done within the family. Harry's family consisted of four boys, Sam, Max, Harry and Mickey and two girls, Becky (Ruvinsky) and Fannie (Simkin). During his childhood Harry was active in all types of sports, an association that has lasted a lifetime.

In 1941 Harry moved to Winnipeg, enlisted and then spent three years in the Royal Canadian Air Force as a wireless gunner on coastal command. After the war, Harry began a twelve-year career as a foreman in a glove factory before starting his forty-seven year commitment to the insurance field as a financial planner and sales representative.

Becky's (Stern) father Joe arrived in Winnipeg in 1909, her mother Fanny (Rosenzweig) in1912, met had a whirlwind romance and married in 1913. Her father went about supporting his wife and their nine children while working in the wholesale clothing business.

Becky married Harry in 1945 and they began their family of three children. Janis (Ross) lives in Vancouver as does their son Ken. Their youngest daughter Faren (Bernstein) resides in Winnipeg. While raising three children both Becky and Harry were active volunteers, Becky at the Seven Oaks Hospital and Harry as President of the Winnipeg Life Underwriters Association and as a member of the Clients Advisory Council of London Life Insurance.

The Rosenbergs are strong supporters of Israel and the Winnipeg Jewish community. They feel fortunate that they have been physically healthy to enjoy the benefits of their community and financially able to assist those less fortunate. They are very proud of their Jewish heritage, which they are anxious to help preserve. They acknowledge the foresight of others who have worked long and hard to maintain a strong, vibrant and recognized Jewish community. They feel privileged that they are also able to add to this legacy of keeping the community alive and full of opportunity for future generations of Winnipeg Jewry.