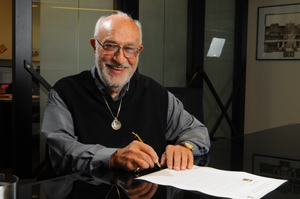 Harris D. Gulko signs his story for the Endowment Book of Life 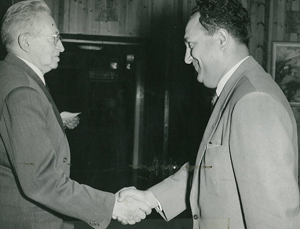 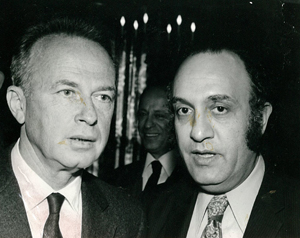 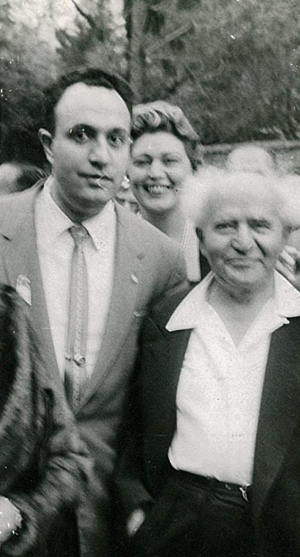 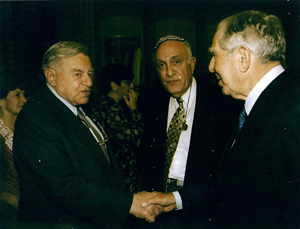 The basic facts of my life can be stated in fewer than 100 words, as follows: I was born in 1927 in Toronto to Morris and Nancy Gulko, the youngest of four children. I married Blanche Ruth Stoll on 12 June, 1949. Our marriage fell apart in 1998 but it provided us with five daughters who blessed us with ten grandchildren and one great-grandchild. I was a professional fund-raiser most of my adult life. I moved to Montreal at age 36, made aliya at age 52, returned to Canada at age 79 in 2006, and now live in Winnipeg. All that follows is anecdotal and archival.

My sister Evelyn started me on a road that led to Jerusalem in 1979. I returned to Canada in 2006. Evelyn died just a few weeks after my arrival. I never dreamed that by her Will she had assigned me the task of being the executor of her estate, which named me guardian of her two schizophrenic sons. Nor had I dreamed some 70 years earlier that when she invited me to a meeting of Young Judaea when I was about 16 years old that it would prove to be the beginning of a profound engagement with Zionism / Palestine / Israel that eventually expressed itself in my making aliyah at age 52. That Young Judaea meeting enrolled me as a volunteer within its ranks, which soon became a staff position. My whole life was connected with Judaism, Zionism, Israel.My association with Young Judaea provided me with several lifelong friends in its Club Jordan. I served as a counselor at Camp Hagshama 1943-4, and in 1945 served as educational director at Camp Kadima, the camp in the Maritimes. We in Toronto wanted a camp closer to our city, and the Zionist Organization agreed to buy one. I found the ideal property in 1948 at Gravenhurst, Ontario. We named it Camp Shalom and I was its first Director.

My work as the Supervisor of Toronto Young Judaea attracted the attention of the people at United Jewish Appeal. Accordingly from 1952-53 I was a UJA Campaign Secretary. When the JNF people saw my work at UJA they offered me an appointment and thus started an association with JNF / KKL that lasted over 3 decades (1953-1984). From 1953-63 I served as Executive Director of Ontario JNF. From 1963-79 I was CEO and National Executive Director of JNF Canada, where the office then was in Montreal.

In 1955 I organized the first chartered trip from Canada to Israel. Not just the first JNF Israel trip from Canada —but the very first charted trip from Canada by any organization or Synagogue. But my main accomplishments while CEO of JNF Canada were, aside from raising the level of giving dramatically:establishing Negev Dinners all across Canada; to greatly enhance the JNF Israeli emissary programme; and at the request of the then mayor of Jerusalem Teddy Kollek, the establishments of the "Garden of the Rebuilders of Jerusalem". After the 1973 War that resulted in the reunification of Jerusalem, Mayor Kollek heard that an American hotel chain was negotiating with the Greek Orthodox Church to buy the land between Jaffa Gate and Zion Gate, and build a hotel on it. Kollek needed to raise a fund to get to the Church first, buy the land and convert it into a beautiful, terraced garden and thus prevent the view of the Old City Walls to be hidden — I would say desecrated. I organized a campaign to enroll 100 Canadians, each to give $36,000 and be named a "Rebuilder of Jerusalem" and have the donors' names affixed to a dedicatory plague designating The Garden of The Rebuilders Jerusalem. Thanks to the Canadian Jewish community, the Old City Walls continue to be in full view. This may very well have been the most important involvement of the Canadian Jewish community in the development of Jerusalem.

In 1979, I was invited to become the Director of the USA desk at JNF / KKL in Jerusalem where I served until 1984. That year I concluded my JNF days and became the International Director of Development at the Herzog Hospital in Jerusalem where I spearheaded many successful campaigns. In particular I organized a multi-million dollar campaign jointly with McGill University, and a similar one with the University of Toronto.

While in Israel I served two terms as the President of the Moreshet Yisrael, the chief Conservative Synagogue in Israel. Also in Israel I discovered I had some talent as an artist. In June 2001 while admiring an art display, a friend suggested that I take up painting. I acted on that advice and have managed over the years to create some paintings that are worth a second look. I had three exhibitions in Israel: at the Israel Discount Bank; the Association of Americans and Canadians in Israel; and at the Hebrew Union College. The Jerusalem Municipal Gallery invited me to have an exhibition there as, but as I was preoccupied with the one at Hebrew Union I had to decline.

I decided to participate in the wonderful program and activities of the Jewish Foundation in pursuit of my life-long belief that tzadaka should always be an integral part of one's budget during one's life, and must also be a factor in planning one's last Will.