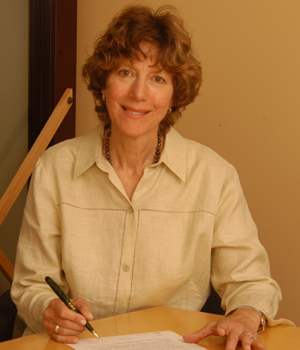 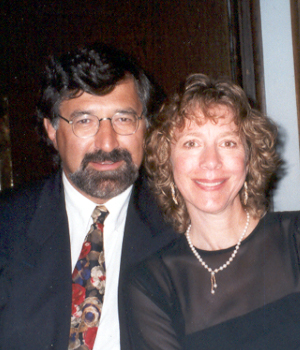 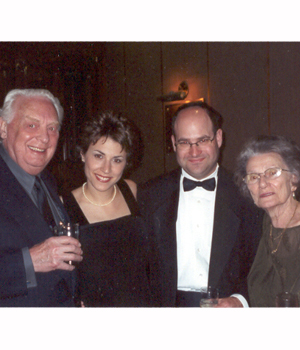 Harriet's parents, Aubie and Sophie Jacob with Mara and Sheldon 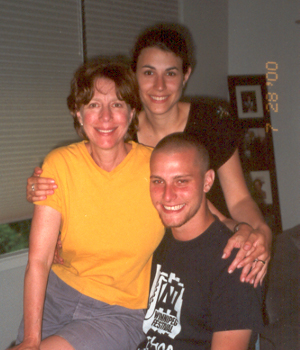 Harriet with Mara and Sami 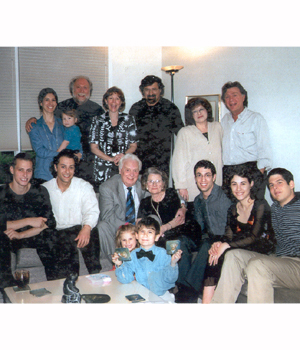 Harriet (Jacob) Lyons is very much her own person, nonetheless she proudly admits that she has been profoundly affected by her parents, Aubie and Sophie, her husband Teddy and her children Mara and Sami. When talking about herself she easily identifies her traits and how her life experiences shaped their development. This story is Harriet's way of acknowledging the impact these people have had on her life.

Born in Gimli, where Sophie sunbathed while waiting for Harriet's arrival, she feels that her childhood was one of continual sunshine. Family was always central to Harriet's life. She fondly remembers the extended family dinners and gatherings with her cousins and her grand parents Sarah and Froika Ratner, and her mother's sisters Molly (Jack) Secter, Bessie (Morris ) Whiteman, Minnie (Will) Karlinsky, Doris (Stan) Sachs and her grandparents Rose and Alex Jacob and her father's brother Itz (Rose) Jacob and sister Sos (Harry) Plattner. Harriet still lives a life stressing the importance of family and how dear friends are really an extension of family. The only daughter of three children, she has an older brother Ken and a younger brother Hersh.

Her father Aubie's music could be heard in the evenings as he played not only for his own enjoyment and relaxation but also at every family function, at B'nai Mitzvot and weddings. He was a giving person - giving of his music as he bought joy to the seniors in the Jewish community. He was giving of his time, of his skills as a clothing designer helping many fledgling companies in their formative years. Upon reflection, Harriet sees her father as a "Renaissance" man. He was an accomplished artist, producing works in pastels, charcoal and oils for over 60 years. Harriet attributes her artistic abilities to her father's influence.

Her mother Sophie "the Baria" was a typical Jewish mother of that era - where there was always room at the dining room table for whoever dropped in and there were always people dropping in. Their home was referred to as the "pit stop" for those travelling out to Winnipeg Beach and to Gimli. This was the "Jacob" home - filled with the sounds of Aubie's music and the aroma of Sophie's knishes.

If Harriet's father-in-law, Ruvin, delivered many of the Winnipeg Jewish babies of the era it was her father Aubie who played the music at most of the Jewish weddings. It must have been fate that drew Harriet to her future husband Teddy, the next great influence in her life.

An hour long telephone conversation ended with plans for a date that blossomed into a lifelong romance. Married in 1967, they spent a year in Scotland where Teddy studied while Harriet taught in the Glasgow slums. This experience coupled with her teaching experiences in the inner city of Winnipeg showed Harriet a side of life that she had not seen before. Harriet is very proud of Ted's career accomplishments and the opportunity to travel the world that his medical career has provided them, however it has also exposed her to the importance of developing care and compassion as an individual. As a result, Harriet became involved in Hadassah for many years as well as the Winnipeg Humane Society.

Parenting reaps many rewards. Harriet wishes that her daughter Mara and her fiancé, Sheldon Zipursky experience the same depth of feeling in their marriage the she and Teddy have and that her parents had for 61 years. The sensitivity and caring which Mara displays are extended to family, friends, work and the environment. Harriet's son Sami has always met life head on, challenging norms as he seeks to establish his place in the cosmos. He is truly a remarkable person.

One of the constants that has existed in Harriet's life is her appreciation and involvement in the art world. From her experiences with her father in music and the arts to her multi-year involvement with Clifton Studios, art has been her solace.

A potter forever, it was while walking through the streets of Jerusalem, while Teddy lectured, that Harriet's artistry took on a religious overtone. Her ceramic mezzuzahs are commissioned locally and nationally, while her Tallit weaving classes at the Shaarey Zedek Synagogue are a must for a congregant who wants to produce a prayer shawl for any occasion. All these activities coupled with her synagogue involvement are providing Harriet with a sense of inner peace and life satisfaction that she displays daily.

This story is Harriet's way of acknowledging those people who have helped shape her as a person and as a way of saying thank you to the Winnipeg Jewish Community.