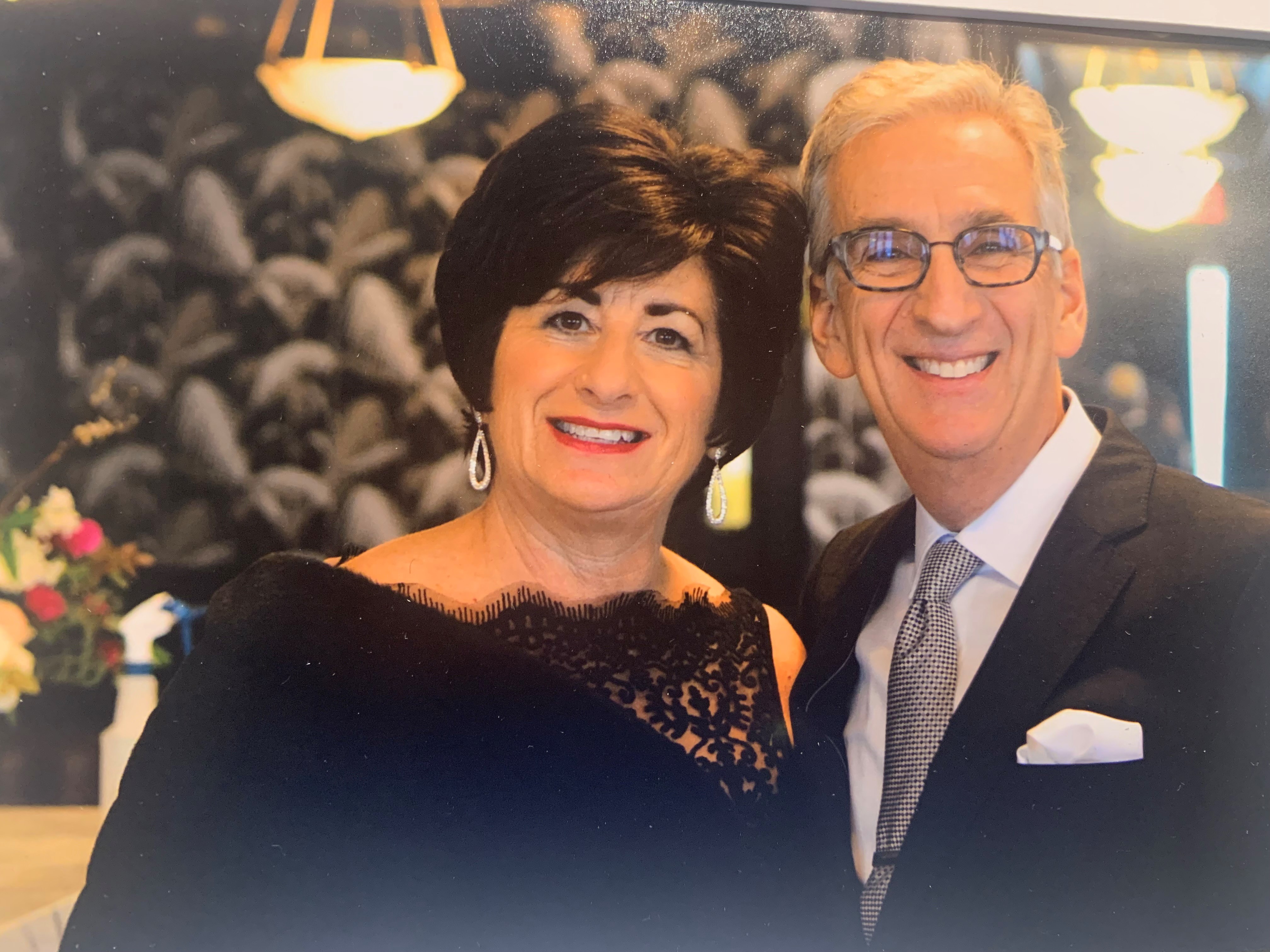 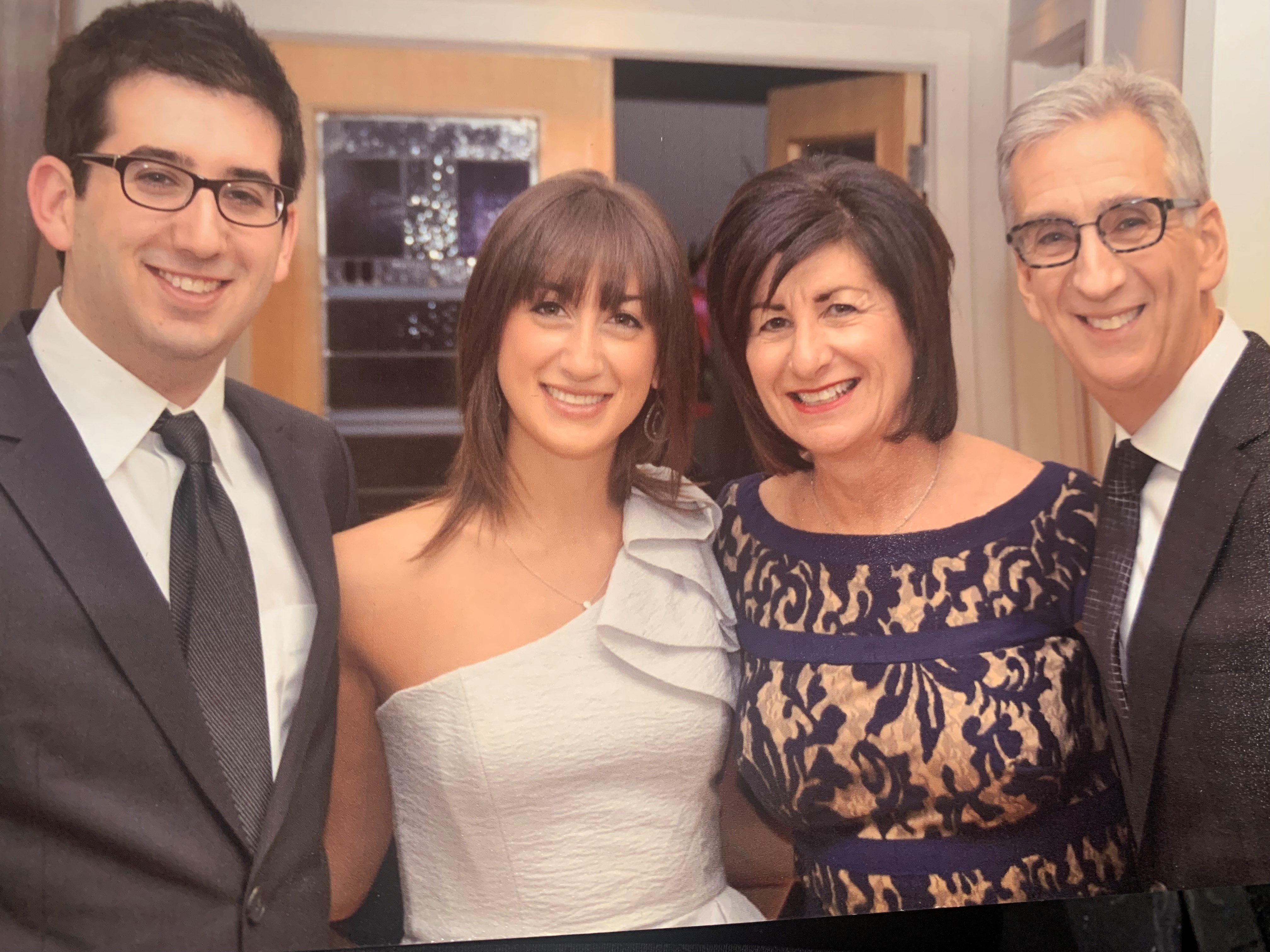 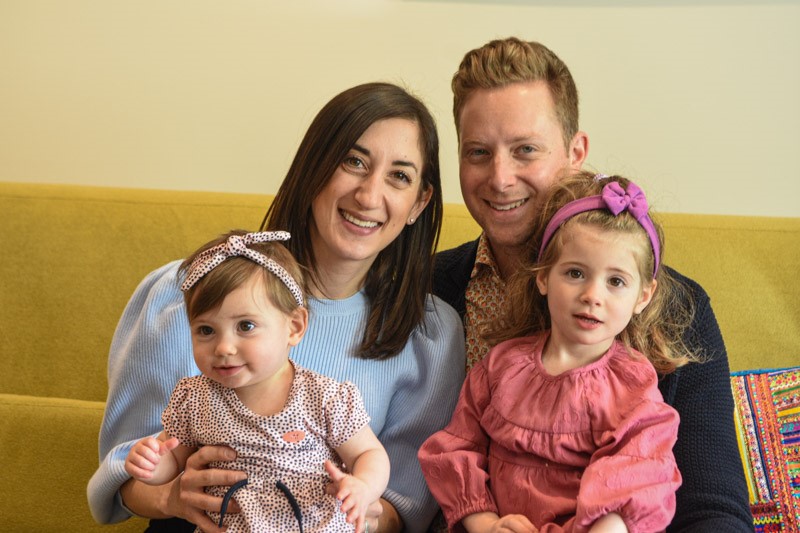 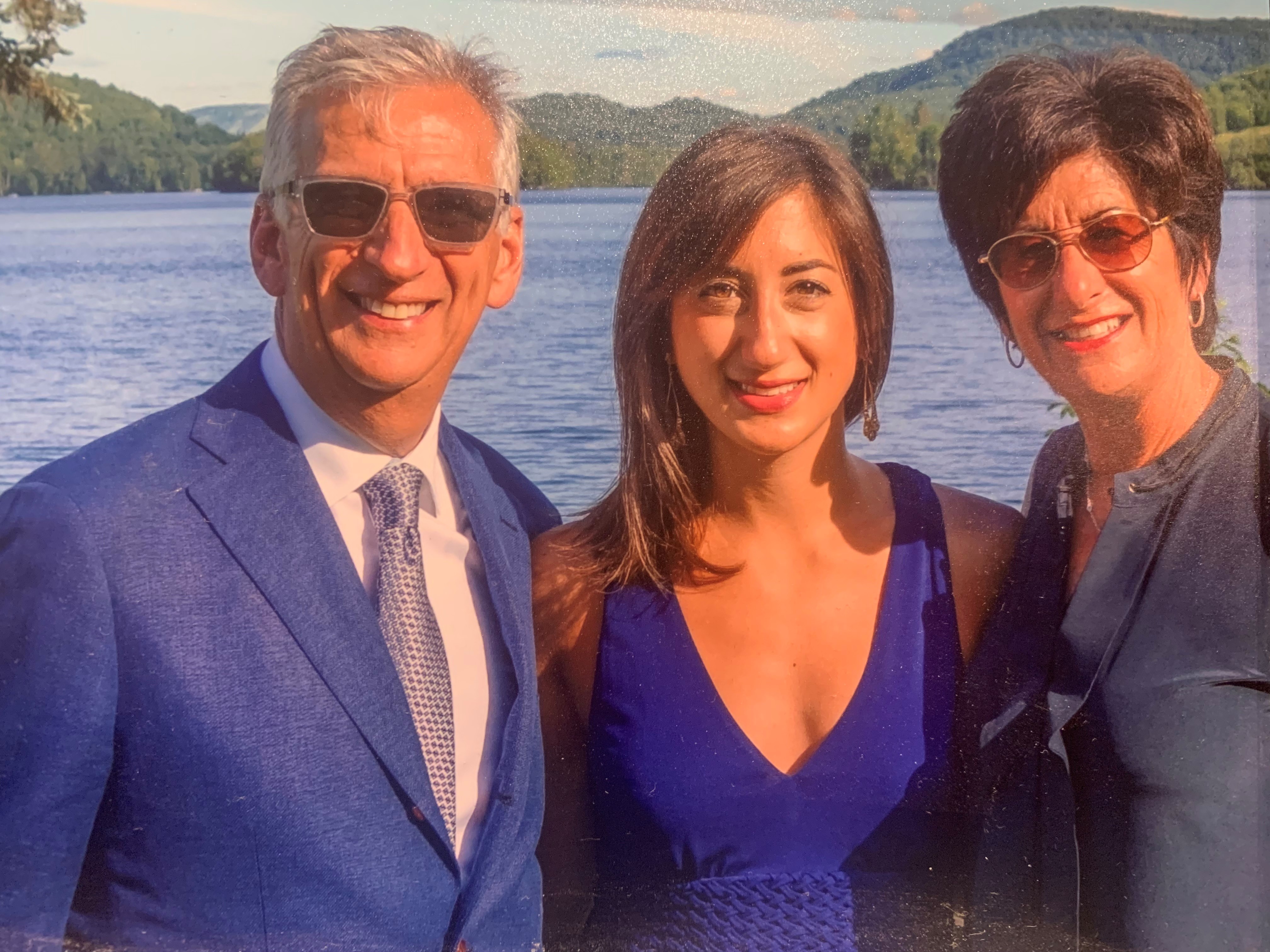 The family ‘Roots’ projects, researched by their children in elementary school, lie on the table, rich references to assist in writing (if required) the story of Alex and Harriet Zimmer. The diverse Jewish stories of their forebears converge to author their own unique chapter in their families’ histories. A ‘made in Manitoba, stayed in Manitoba’ story of love, lovingkindness and menschlichkeit.

Harriet Axelrod was born in Winnipeg in 1955 to Pat and Joseph Axelrod. Her mother had come with her parents, Eva and Harry (Haskell) Krashin to Canada from Romania in 1925, and her father moved to Winnipeg from Stenen, Saskatchewan, with his parents, Goldie and Isaac. Harriet has two siblings: Ellen (David Greenberg) and Bobby (Allison).

Growing up in Stenen, Joseph Axelrod, (b- 1921) received a Jewish education and celebrated his Bar Mitzvah. He served the RCAF during the second world war and afterward owned Joe Axelrod’s Service stations in Winnipeg. He was an active member of the Hebrew Fraternal lodge and Herzlia Synagogue. Sadly, he passed in untimely fashion in 1969 when Harriet was but 13 years old. She has many special memories of her father and remembers him fondly as a warm, family-oriented man.

Pat, a widow at the age of 45, picked up and went to work when presented with the challenges of being a ‘single mother.’ She worked for several Winnipeg retail giants, including Weidman Brothers, Holt Renfrew, and Brettons during her career spanning 27 years. In retirement, she devoted her time to volunteering for the Winnipeg Art Gallery, worked for Elections Canada when needed, and enjoyed games of Mahjong with her friends. Her grandchildren adored her and her unique expressions, which they refer to affectionately as ‘Baba Pat-isms.’

Harriet’s childhood home on Waverley Street was kosher and traditional. As a child, she attended Robert H. Smith School, River Heights School, in addition to her Jewish studies at Ramah and Herzlia evening schools. Like many of her peers, she rode the bus on Saturday afternoons to the YMHA to participate in various clubs and programs, including USY and the Gabriels Chapter of BBYO. Summers were enjoyed at BB Camp. After graduation from Kelvin Highschool, she obtained her degree in Social Work from the University of Manitoba. Armed with her new credentials, she embarked on a seven-year career with City Welfare, observing firsthand an inner-city rife with poverty, substance abuse, a world of great need, and sadly scarce resources. In 1997, Harriet made the decision to return to school to pursue a degree in Conflict Resolution, most of which she completed by taking night classes while her children were very young. Upon completion of her studies, she accepted a position as the guidance counselor at Balmoral Hall School, where she enjoyed her work until her retirement in 2012.

Harriet and Alex met at the YMHA, and their journey together began when Alex summoned the courage to invite Harriet on their first date: an evening at the Round Table Restaurant. On June 22, 1980, Rabbi Rappaport performed their marriage ceremony at the Rosh Pina Synagogue, followed by a honeymoon in San Francisco – the first of many adventures for this married couple.

Alex was born in 1955, in Winnipeg to Jeanette (Salaman) and Leo Zimmer (formerly Zimmerspitz), both Holocaust survivors from Poland. He recalls with pride how determined his parents were to adapt to their new homeland and provide a ‘Canadian’ upbringing for their children –both were native Polish speakers, but they spoke only in English at home. His family’s home was traditional with lively holiday celebrations, Shabbat dinners were enjoyed with his extended family. Jeanette and Leo placed a high value on Jewish learning, so Alex attended Talmud Torah School for his early years. In the 8th grade, he became a student of Jefferson Junior High, followed by Garden City Collegiate. Alex participated in clubs and programs at the YMHA as well as being a member of AZA.  As a young man helping in his father’s store, North End Tailors, he recalls asking his father to teach him how to ‘fit a suit’, which Leo refused; it was preferred that Alex embrace his educational opportunities and become a respected professional. After completing one year of science at the University of Manitoba, Alex was accepted into the Faculty of Dentistry, graduating in 1978 at 23. Initially, he practiced as an associate in the Boyd Building and within three years established his own practice with a partner, Allan Finkleman. During his years in Dental School, he met several colleagues who would become lifelong friends.

Harriet and Alex became parents in 1984, with the birth of their son, Joel (named for Harriet’s father), followed in 1988 with the birth of their daughter, Leanne (named for Alex’s father). Joel studied Computer Science at the University of Waterloo and currently works in Brooklyn, New York as a software architect. Leanne, also a graduate of the University of Waterloo, is a Doctor of Optometry working in Winnipeg. Joel and Leanne, grandchildren of survivors, participated in March of the Living as teenagers. Leanne married Jared Akman in 2015, and they have two children: Julie (2018) and Hannah (2020). Harriet and Alex have embraced their roles as baba and Zaida, calling it simply the “best,” happily taking active roles in their grandchildren’s lives. In their home, they often host holiday gatherings to share a blessed meal and their Jewish faith and tradition with their growing family.

Since very early in their marriage, Harriet and Alex have supported several organizations both in the Jewish community and beyond. Their extensive volunteer work and generosity emphatically illustrate their commitment to Tikkun Olam. As a young woman, Harriet joined the Jewish Federation’s Young Professional Division and ever since, has committed time to be of service: at Ramah reimagining the tired Hot Lunch menu, spearheading the annual Fun Fair to chairing Community Programs such as the Federation’s cooking series featuring celebrity cookbook authors. More recently, she has loaned her skill and time to educational initiatives for Jewish Child and Family Service. The list goes on. In 2013, she and two friends brought ‘Soup Sisters’ to Winnipeg – a program that brings volunteers together to make soup for Willow Place – a shelter helping women and children fleeing domestic abuse. The program has been very successful. In her leisure time, Harriet is a skilled cook, an avid Bridge and Mahjong player. Like his wife, Alex has been a tireless volunteer over the years, including board affiliations with Rosh Pina Synagogue, BB Camp, and the Alpha Omega Fraternity. Alex readily admits to having the “shpilke” factor: a need to be moving or doing.  He has cultivated many hobbies to quell his shpilkes, from learning to make stained glass to boxing to sculling on the Red. A modestly self-described ‘social’ cyclist, a cross-country skier, and a leisurely walker – all serve to sate his boundless energy. For his graduation from Garden City Collegiate, Alex received a Nikon “Nikray” camera which sparked a lifelong passion for photography. Over the years, he has been a true student of the art. He has honed his craft to a level of such excellence that he is frequently called on to document such events as the Winnipeg Jazz Festival, Assiniboine Park Conservancy Garden Parties, and Limmud. Harriet and Alex’s shared wanderlust has led to extensive travel to such remote locales as Vietnam, Poland, India, Rwanda, and many more. They have made several trips to Israel to strengthen their connection to their Jewish roots and explore Jewish communities in other countries they visit. Equipped with his camera, Alex captures breathtaking images which illustrate the unique flavors of their various destinations. There remain many countries on their travel wish list, including Ireland, Scotland, United States, and Kazakhstan, with its incredible city of Nur-Sultan with its futuristic, otherworldly architecture. Many more exciting stories to be written and shared adventures lay ahead.

In closing, the last words are theirs:

Harriet and Alex will continue their support of the Winnipeg Jewish community through philanthropy and active volunteering. We have learned from our parents the importance of our Jewish tradition, our Jewish heritage and the value of Tzedakah. We are passing these important values to our children and grandchildren as our commitment to the Jewish community through the Book of Life. …… From generation to generation. L’dor va dor