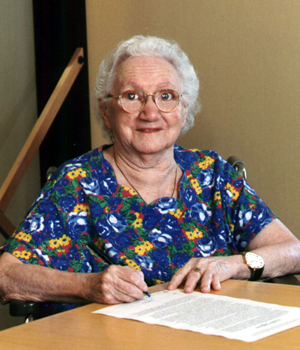 My father, Chaim Sandler, literally helped to build the city of Winnipeg. Emigrating from Latvia in 1903 he settled in this prairie city and became a street builder. In 1907, his wife Reva joined him in Canada and the couple moved to Kenora, Ontario. It was there that I was born in 1911. When the local Rabbi refused to give me the Jewish education that I craved, simply because I was a girl, my family decided to move back to Winnipeg. Here, Rabbi Frankel gladly came to our home and taught me together with all my siblings.

In Winnipeg, I attended William Whyte School and St. John's Tech. Growing up in the warm Jewish environment of the North End I made many life-long friends, but I cannot recall ever experiencing any anti-semitism. My father was active in the Hebrew Sick Benefit Association and helped with the development of its cemetery. In fact, it was there, at a Chanukah party, at the Hebrew Sick on Selkirk Avenue that I met my future husband Frank Phomin. We were married in 1938 and had two children, a daughter Evita born in 1940 and a son Jerome born in 1947. Today I have five grandchildren and four great grandchildren. I was widowed in 1962 and, in 1966, married Phil Loffman. We lived in Los Angeles until his death less than two years later.

Throughout my life, I have been active in many Jewish organizations, including Mizrachi, Pioneer Women, Gwen Secter and the CJA. Early in my marriage I collected money for Jewish War orphans, and still do telephone solicitations for some local Jewish organizations. For 25 years, I also worked in the office of the Israelite Press.

Winnipeg is a wonderful place to live. While I have witnessed many changes in the city in my 88 years, I believe that the best change has been the establishment of the Asper Jewish Community Campus. It is the most marvelous place! When I come to the Stay Young Club, I sit and watch the school children and the young mothers with their children, and it gives me hope for the future. I wish them everything good. I hope they will never need to go through wars like we did and I encourage them to keep their Jewishness and to take the time to learn from the past.