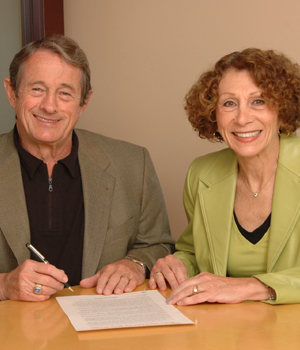 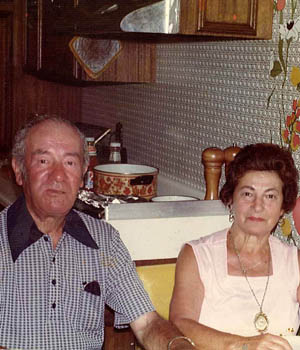 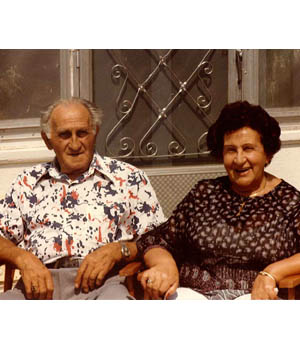 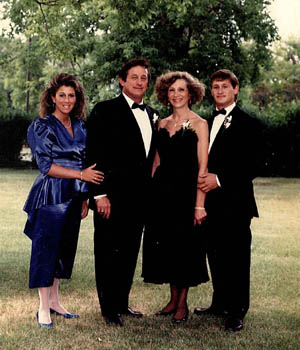 Glory and Larry with their children Mickaela (Miki) and Randy 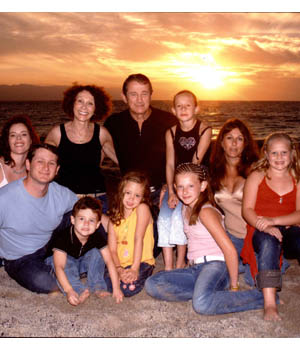 Glory's father, Joseph, immigrated to Canada from Poland as a teenager in 1928. His parents, Asher and Bayla, followed. Glory was very close with her grandfather, a modern orthodox man who never learned to speak English.

Joseph was a quiet family man who was very involved in the labour movement in his youth. He worked as a presser and later owned a restaurant, retired and became a driver/salesman. He instilled in Glory and her sisters, Beverley and Marleyne, a love of learning, insisting that they discuss current events at the dinner table every day. He died in 1982.

Glory's mother, Sonya (Primack), who died in 1999, was also from Poland. She arrived in Canada as a domestic and then worked in the shmata industry. She was a caring mother who always tried to do the best for her daughters. She sang to them, and told them stories of her family in Poland who had perished in the Holocaust. She was a life member of Pioneer Women, and sang in the Brownstone and Stay Young choirs.

Glory was raised on Boyd Avenue and then on Jefferson. She attended the I.L. Peretz Folk School until the end of grade seven, serving as class valedictorian at graduation. She then attended Victory School where she had a rude awakening when she realized that the whole world was not Jewish, as she had believed. She studied piano and dance, was involved in Young Judea and the Y. She completed grade 11 at West Kildonan Collegiate in its first ever graduating class.

Following a year of university, during which she was active in Hillel and greatly influenced by Rabbi Zalman Schachter, Glory became the first Jewish student in the two-year x-ray technician program at Misericordia Hospital. It was a wonderful experience, and Glory, graduating in 1960, again was selected to be class valedictorian. She then began working at the Kobrinsky Clinic, remaining there until she married Larry in December of 1961 at the B'nay Abraham Synagogue.

Glory and Larry met at the Oasis Swimming hole when Larry asked her to go for a swim and subsequently saved her from drowning. At the time, Larry was playing professional football for the Winnipeg Blue Bombers, but a week after meeting Glory he was sold to the Edmonton Eskimos. When they married, Glory moved to Edmonton. Although she was reluctant to leave behind her younger sisters, she quickly discovered that the Edmonton Jewish community was very welcoming. Working in her field in Edmonton, she helped pioneer mammography.

Larry's path to Edmonton began with a full football scholarship to the Baptist Wake Forest University in North Carolina in 1952, about four years after he graduated from St. John's Tech where he was a football star. Immediately after high school he played junior football for the Weston Wildcats, and began working in the CPR office because his mother, Anne, insisted he find a 'nice' job.

Anne (Langsam), like Larry's father Max, arrived from Poland in the late 1920s. She worked in a factory while Max, an orthodox Jew, worked for City Bread as a driver/salesman, and then as an insurance salesman. Max died in 1944 when Larry was nine. Three years later Anne remarried Sam Sprecher, a Holocaust survivor. Sam and Anne opened up a grocery store and restaurant and moved Larry and his sister, Shirley, from the mainly Jewish Derby Apartments to living quarters behind the restaurant on Logan and Arlington. They later moved to a house on Inkster.

During his professional football career with the Edmonton Eskimos, Larry taught school, as well as pursuing a Bachelor of Education degree. He then took a sabbatical and received his Master of Arts in Administration from the University of Oregon. Returning from graduate school to Edmonton in 1966, he taught high school history and physical education, and coached football for four years. In 1970 he was promoted to the Director of Staffing for the Edmonton School Board.

In December 1973, Larry, Glory and their children, Mickaela and Randall, returned to Winnipeg when Larry was hired as Director of the Child Guidance Clinic of Greater Winnipeg, a position he held until 1991. In 1991, Larry was promoted to Director of Resource Development for the Winnipeg Public School Board, a position he held until his retirement in 1997. Glory was employed as librarian at Ramah Hebrew School from 1976-1988.

Today, Mickaela, a teacher, lives in Scottsdale with her daughters, Madeline, Kylie and Alexi. Randy, a real estate investment banker, lives in Dallas with his wife Lisa and children, Marlee and Jonah.

Glory and Larry enjoy a close relationship with their children and grandchildren, whom they see frequently. Between visits, Glory serves as chair of the Shaarey Zedek Synagogue Tikkun Olam Committee and sits on the Jewish Child and Family Service Board. She served as Shaarey Zedek Sisterhood co-president, and on the board of management of Shaarey Zedek. Larry and Glory co-chaired the Manitoba Maccabi Games Committee from 1983 to 1988.

During their summer vacations from 1976 to 1979, Larry and Glory traveled to Guyana, Barbados, and Antigua where Larry taught administration for CIDA. Larry, who served as a City Councilor for 13 years, was an official representative on Mayor Bill Norrie's Be'er Sheva-Winnipeg twinning trip to Israel. He served on the board of Ramah Hebrew School and the Jewish Federation of Winnipeg, and presently serves on the Board of Directors of the Chai Folk Ensemble and of the suicide prevention organization SPEAK. He is particularly proud of being a 100-pint blood donor for the Red Cross.

Larry and Glory both enjoy myriad hobbies including bridge, fitness, gardening, music and volunteering with Winnipeg Harvest and West Broadway Ministries. They hope to be remembered as loving parents and committed community volunteers. It is their prayer that Winnipeg's Jewish community continues to be vibrant and a role model for Canadian Jewry.