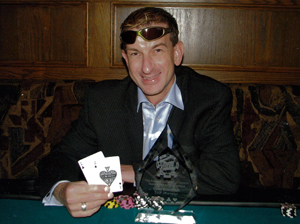 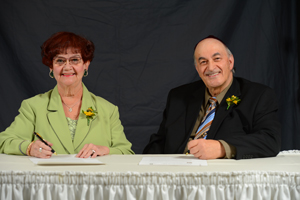 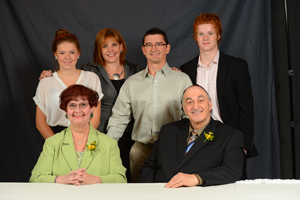 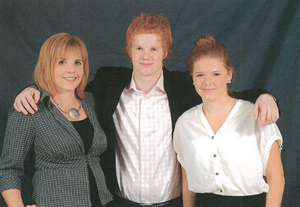 David's sister Susan and her children, Darrel and Taylor 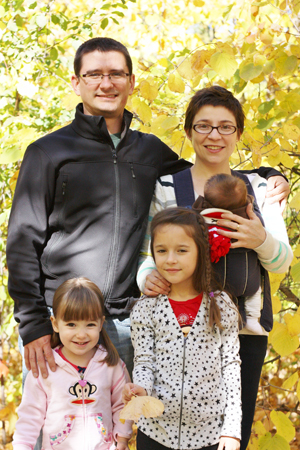 David's brother, Daniel and his family 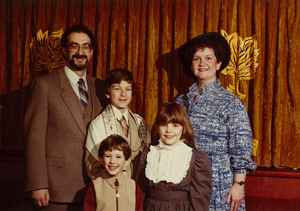 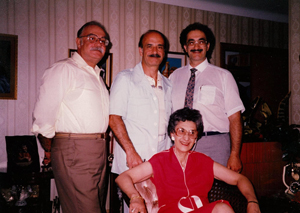 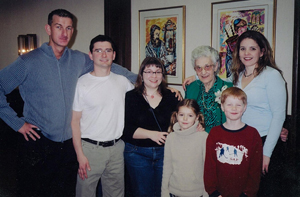 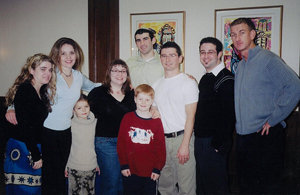 When David Moscovitch passed away on May 17, 2012, our community lost a bright, driven, hard- working, and caring young man.

Dave was the son of Jerry and Gloria Moscovitch (née Adler). He was the big brother of Susan Kilburn and Daniel Moscovitch (Melanie Shell); doting uncle to Darrel and Taylor Kilburn and to Ezri and Leila Shell-Moscovitch. A nephew to Dave was born to Dan and Melanie on August 22, 2012, and was named Oscar David.

Dave was born on March 7, 1970, and, like his parents and siblings, was born in Winnipeg. Europe was the birthplace of his grandparents: Jennie Moscovitch (née Kankewitt) (Poland); Morris Moscovitch (Basarabia); Millie Adler (née Hallis) (Russia); and Harry Allan Adler (Romania). While growing up in River Heights, Dave spent a good deal of time with both Babas and was happy that they were both at his Bar Mitzvah. Dave also enjoyed special relationships with his Aunts and Uncles, Betty and Joe Wohl; Adele and Earl Moss; and his Uncle Walter Morris. Dave and Walter would spend hours together talking about sports and business, two topics that excited Dave — even at a young age.

His parents remember a young athlete who competed aggressively in baseball and soccer, coached by his Dad, and sometimes trying so hard to kick the ball that he would end up on the ground. But, he always got right back up. This was Dave — he didn't let anything keep him down.

His passion for sports extended off the field, and throughout his life. He was a collector of baseball, football, and hockey cards; Richie Rich comics; and anything pertaining to the Dallas Cowboys, his favourite NFL team. Dave also volunteered at the 1999 Pan-Am games with his Dad.

Whether taking Dan skiing, working out at the gym, playing sponge hockey or golf with his friends, or introducing Susan and Darrel to golf, Dave was thrilled when his love of family and friends and his love of sports came together.

Dave loved and excelled in Fantasy Football, always astounding his friends with his success. His friends dubbed Dave "Mosc" and so his team was called "The Mosc Factor." His friends are now calling their annual draft the "Mosc Memorial Fantasy Football League." Friends were also amazed by his prowess at the poker table. Dave was a student of the game. He won a seat at the World Tournament of Poker in Las Vegas and went back to Vegas many times in the last six years with his friends. He even contributed some research to a friend's recent book on the game. Dave saw the book and his name in print just a few days before he passed away.

As a child, Dave attended William Osler and Ramah schools, and then graduated from Grant Park High School. Dave earned a Bachelor of Arts (Honours) degree in Economics from the University of Manitoba, was enrolled at Queen's in the MBA program, and completed the Canadian Securities Course in Toronto.

Dave liked to do well at school. His grades were solid throughout his education, and he won (and later judged) a number of science fairs, making it to the provincials. His family credits his success in school to his hard work, his curiosity, and his organizational skills (not to mention his ability to schmooze with his teachers).

Outside of school, Dave was always busy and productive. He had a paper route as a young boy (although his sister Susan fondly recalls that he outsourced some of the work to his younger siblings!). While in high school, Dave was an usher at Winnipeg Jets games and at the Centennial Concert Hall; while in University Dave worked in management at Branigans, in his cousins' offices at Imperial Roadways, and also at the Holiday Inn. But it was the world of finance that called to Dave the most. After his formal education, he found himself in Austin, Texas, as an investment strategist and the youngest member of the Austin Board of Trade. He stayed for almost two years, but started to miss his family and so he returned home and landed a management position with HSBC where he worked for 12 and a half years before his passing. Dave earned many awards and accolades at HSBC, and travelled across Canada to train staff and to facilitate and partake in company seminars.

Dave always pushed himself at work and at play. He enrolled in personal development programs where he achieved great success and learned important life lessons as he rappelled down mountainsides in San Francisco and Fiji. He studied to be a Samurai with leading motivational trainers in advanced programs. Dave always wanted to achieve more and do better — whether on the job, or in a Vegas poker room. He did what he set out to do.

While Dave set out to achieve all that he could, family and friendships were most important to him. To his friends he was loyal, and he would do anything and everything for them, for his parents, for Susan and Dan, Taylor, Ezri, Leila, and Darrel, and for all his family. It's hard to find a photo of Dave where he isn't embracing someone.

In recent years, Dave's family says he mellowed and started to smell the roses, and consciously made an effort to "work to live" and not just "live to work." As the age difference among siblings became less stark with the passage of time, Dave took a great interest in Susan, Daniel, and their families. He was always there for his family unconditionally. And there was always the nightly phone call with a "lyla tov and I love you" for his Mom and a "how was your day?" to his Dad.

Dave never came in or left without a hug for his parents, for Susan and Dan, for Melanie, his nieces and nephew, and for his aunts and uncles. Dave was irreplaceable. He was a one-of-a-kind individual and he will always be remembered.

He was a caring son, a loving brother, a doting uncle, and an unconditional friend.

Dave was a peace-maker who knew how to read relationships; a modest man who knew how to pull his family together. He was a very convincing voice of reason; a good-humored, smart, loving young man with an infectious smile who left us far too early at the age of 42.

Lyla tov, Dave. You will be in our hearts forever. You are so loved.