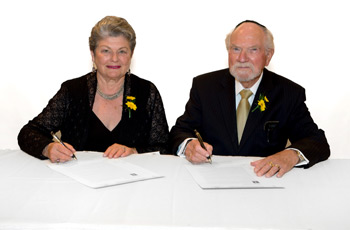 Gloria Cantor sign her story for the Endowment Book of Life 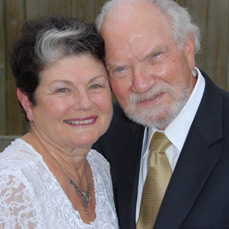 I was born in Winnipeg in 1936 to Jacob and Lily (née Zelicovitch) Shapiro, who had immigrated to Winnipeg from Zelva, Poland, to escape anti-Semitism and the persecution of Jews: my father in 1926, and my mother and infant brother, Albert, in 1927. My parents sponsored my mother's brother, Benjamin, in 1929; her mother, Sora Seema, in 1936; her brother, Israel, his wife, Idka, and their children, Nurit and Asher, in 1952; and there was also a failed attempt to bring her sister, Brocha. They sponsored Shapiro relatives, as well. My older brothers, Albert and Elvin, are both deceased.

I have lived in Winnipeg for most of my life. From 1943 to 1953, we lived in Frobisher, a small hamlet in south-eastern Saskatchewan. We had no indoor plumbing, and were the only Jews in the community. Later, I realized that we were tolerated, and only accepted by a few of the customers. We operated a general store, and had the reputation of being fair, honest, caring, and generous. My mother was the business person, running the store. My father preferred being a famer and a cattle dealer.

It was heart-wrenching for my brother, Albert, to leave for the army, and all right for my brother, Elvin, to leave for university in Winnipeg. But it wasn't all right for a daughter, so my parents and I moved to the city in 1953. Our home was open to all of my friends and Elvin's. Elvin, being somewhat rotund, was nicknamed "The Shape" and I was "The Better Shape." My mother ("Mrs. Shape") was famous for her cinnamon buns, and our friends stopped by to visit her even after we had left home. Mom was a wonderful Baba to all our children, travelling by bus to help take care of them. My mother was known to take in stray dogs, cats, a pony, and people.

I have fond memories as a child of my father taking me to the movies; teaching me how to drive (a truck); rescuing two friends and me returning from a 20-mile round trip by bike to Hirsch, Saskatchewan; holding our six-month-old, Stephen, while I cut his hair; babysitting Diana while he studied for a written driver's test; playing horsey for cowboy Stephen and cowgirl Susan; and always having candy for David when we visited.

I attended I.L. Peretz and Machray schools in Winnipeg, and also went to school in Frobisher for grades 2 to 10, and then Estevan for grade 11, living with my uncle and aunt, Ben and Freda Zelcovich, and cousins Joan and Sheila. I went to United College in Winnipeg for grade 12 before attending the University of Manitoba. I graduated with a Bachelor of Arts degree in 1962 (after the birth of our second child, Susan), having majored in English and Sociology.

In 1952, I travelled alone by train to meet my father's relatives in Philadelphia. As I had few relatives in Winnipeg, I was delighted to meet 16 of my 18 first cousins and many second cousins, reunite with my two uncles, and meet two surviving aunts and their families. I really felt that I belonged, and to this day stay in close touch with my father's family. In 2013, we held our seventh Shapiro Family Reunion in Philadelphia.

I married Allan Cantor in I957, and was warmly welcomed into the Cantor, Portigal, and Buchwald families. I had a wonderful relationship with Allan's parents, Elsie and Maurice Cantor. Allan and I have four children: Stephen (1959); Susan (1962), married to Doug Foster; Diana (1965); and Rabbi David (1970), married to Kedma (née Christine Barnson). David and Kedma have given us four wonderful grandchildren: Yoash, Avniel, Shoshana, and Devora.

My work career began at the age of seven, helping out in the store; by age 15, I was responsible for many aspects of running the business. After moving to Winnipeg, I earned tuition money during the summers, first as a clerk/manager of a Perth's depot for 50 cents per hour, and then as a sales clerk at The Bay. I later enjoyed a 12-year real estate career with Park Realty, which became Rischuk Park Realty.

My most important career was as a "Domestic Engineer": wife, mother, grandmother, caregiver extraordinaire, and community volunteer. I am a Life Member of National Council of Jewish Women of Canada, in which I held positions on the local and national Executives and Boards, and of Hadassah.

I have enjoyed travelling with my husband and our children and our friends. We've been camping, sailing, cross-country, and downhill skiing; and taken family trips to Vancouver, the Maritimes, Florida, California, the Rockies, and Barbados. Together, Allan and I have travelled to many fascinating destinations.

We've visited Israel three times: in 1996 on the Canadian "Jerusalem 3000" tour, which was absolutely amazing; in 1999, to visit our son, David, and his family, sightseeing and spending a week in Eilat; and in 2011, spending time with friends and relatives for Rosh Hashanah and Yom Kippur. We have seen Israel from top to bottom and from side to side — it is all wonderful!

Allan's involvement in the Canadian and International Bar Associations enabled us to attend conferences in many cities across Canada and in India. Since 1996, we have been vacationing in Mexico during the winter months, sometimes travelling by car and visiting friends and family along the way.

We have enjoyed our cottage, first in Gimli and now lakeside in Loni Beach, with our children, grandchildren, family, and friends for the past 48 years. As I enjoy gardening, my flower beds and rock garden are much admired. Allan and I celebrated our 45th, 50th, and 55th wedding anniversaries at garden parties at the cottage.

My parents instilled in me the values of honesty, commitment, kindness, devotion, helping others, and the importance of supporting Israel and the Jewish community.

It is a privilege to be included in the Jewish Foundation's Endowment Book of life.