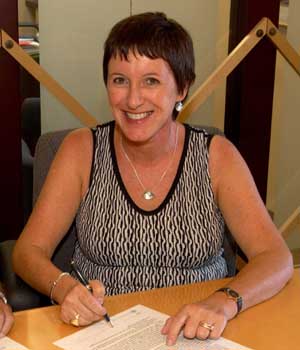 Glenna Kay signs her story for the Endowment Book of Life 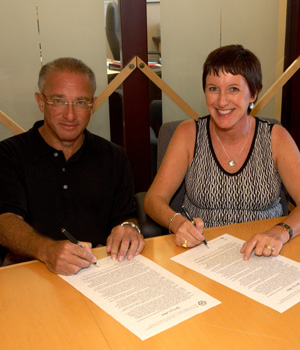 Glenna Kay cherishes very fond memories of her childhood community of Glace Bay, Nova Scotia, but after 26 years in Winnipeg, it is this prairie city that she considers to be her home.

Glenna's father, Daniel Mendelson, was born and raised in Glace Bay, where his parents ran the general store. When they died within six months of one another, Daniel and his siblings were taken under the wing of the community, which also arranged for Daniel's Bar Mitzvah. Daniel and his older brother, Sam, took over the store and remained in the community.

Glenna's mother, Esther Lancit, met Daniel when he was on a buying trip in her hometown of Montreal. Glenna, born in 1958, was their only child. Her Uncle Sam always lived with them and Glenna enjoyed a very close relationship with him.

While Glenna was growing up there were 60 Jewish families in Glace Bay, all of them involved with the community and with the orthodox synagogue, Congregation Sons of Israel, co-founded by Glenna's grandfather. The community was very united and very Zionistic. There was a kosher butcher in town, annual Chanukah concerts, and a full time Rabbi until 1975.

Glenna's mom served as membership chair of Hadassah and her father chaired Israel Bonds and was secretary of the synagogue. Glenna accompanied her father to shul every Shabbat morning and attended after-four Hebrew school. She was active in Young Judea and spent summers at Camp Kadima in Halifax. Glenna graduated high school in 1977 and, as was expected of her, went off to Halifax for post secondary studies. She enrolled at Mount St. Vincent University, pledged a Jewish sorority, and graduated four years later with a degree in child studies. She then headed off to Winnipeg.

Glenna has a cousin living in Winnipeg, and had grown fond of the city during visits here. She liked its size — the fact that it was bigger than Glace Bay but smaller than Toronto. She quickly found a job with the Seven Oaks School Division and easily made friends. Winnipeg began to feel like home within six months.

Glenna met Michael Kay in the winter of 1982 and they were married a year and a half later in Glace Bay, with over 100 out-of-town guests in attendance. Glenna continued working until the birth of her first son, Aaron, in 1986. Her second son, Daniel, was born in 1989. Both boys are now university students, involved in a variety of sports and activities.

Glenna has spent the last 20 years devoted to her family and to her community.

During the early years of her marriage Glenna became very involved in National Council of Jewish Women and still counts many of the women she met then as her closest friends. She chaired the Gwen Secter branch and eventually became president of the Winnipeg section. Currently she is past president.

Glenna's extensive volunteer work includes canvassing each year for the Cancer Society, and serving on the Board of Directors of Jewish Child and Family Service and the Jewish Federation of Winnipeg. She currently sits on Federation's Multiple Appeals Committee, is

co-chair of the 2007 Women's Plus Giving Event, and past chair of the Women's Campaign. She feels privileged that she has been able to serve her community through her volunteer work, and credits her father for teaching her about the value of tzedakah and giving back to the community.

When she is not busy volunteering, Glenna looks after her home, her family, and her beloved dog Cohiba, and plays tennis and cycles. In 2001 she returned to Glace Bay with her mother, now widowed and living in Montreal, to celebrate the synagogue's 100th birthday. There are currently 15 Jews living in Glace Bay.

Glenna has never regretted growing up in a small Jewish community, nor has she ever regretted making the move to the big city of Winnipeg. Winnipeg has been good to her. It has become her home.