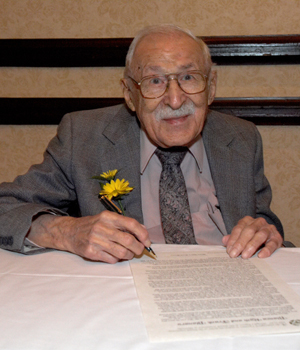 Fred Narvey signs his story for the Endowment Book of Life

At the age of 94, Fred Narvey looks back at a fascinating life that has been shaped and influenced by his working class beginnings and many major world events. The constant in this life has been his wife of 71 years, Gertie, who, like Fred, now resides in the Sharon Home. Fred is grateful for the care that both he and Gert receive at the Sharon Home and thinks that Winnipeg's Jewish community is very fortunate to have such a wonderful facility.

Fred grew up in a very loving family in a tiny house with no foundation at 775 Selkirk Avenue. He remembers the kitchen dugout and trapdoor, the woodstove, the Quebec heater and the tin pipes suspended from the ceiling by chicken wire. In the winter, his father, Kasriel, would pile coats on his children's beds to keep them warm.

Kasriel had emigrated from Russia in the early 1900s. He had already served six years in the Tsar's army and was evading further service in the Russo-Japanese War of 1903. After five years in Canada he sent for his wife, Faiga, and their three children, Jenny, Clara and Ben. They lived on land Kasriel had managed to purchase in Birds Hill, while he continued to work in his uncle's Transcona store. The family soon expanded to include Canadian- born Reva, Bella and Fred, who was born in 1913.

In 1915 they moved into Winnipeg, where Kasriel had found work as a shipper with Brown and Rutherford Lumber and Millwork. He worked six days a week, earning only enough to provide his family with the most basic necessities. His only holiday was during the Winnipeg Strike of 1919, when he was forced to ask for credit at the corner store. That was also the year of the deadly Spanish flu epidemic, when, in spite of wearing boxes of camphor around their necks, Fred and all his siblings and mother became ill. Fortunately, Kasriel was able to nurse them back to good health. These two events, the strike and the flu epidemic, had a major influence on Fred's politics, life outlook and the kind of person he became.

The year 1929 also left a great impression on Fred. His father died, leaving his family penniless and Fred had to immediately quit school to help support the family. Miraculously he quickly found a job at the Purity Ice Cream plant, earning $40 a month, to the envy of all his friends. Looking back, Fred recalls the years of the Great Depression, 1929 to 1939, as his most formative years.

In 1930, Fred met Gertrude Bercovich at a meeting of the first English speaking branch of the socialist Zionist Poale Zion organization. Fred was shy but Gertie talked enough for both of them. They became inseparable, spending time together at River Park Exhibition and at the Winnipeg Beach dance hall.

Fred and Gertie married in 1936 on a Sunday afternoon with 25 people and a three piece band in attendance. After a Minneapolis honeymoon they moved in with Gertie's widowed mother for the next four years. Gert was a graduate of St. John's Tech and a talented pianist. She introduced Fred to music, and many years later, when they could afford it, they became regular patrons of all the musical events in the city.

In 1930 Fred became involved with Joe Zuken's Progressive Arts Club, which produced plays of social significance. What they didn't know about technique they tried to make up with shouting and sincerity. When the players moved downtown and reformed as the New Theatre Group, they attracted more polished actors and produced better quality plays . One of these was named 'Best English Play' at the National Drama Festival. Fred also became chairman of the Jewish Anti-Fascists League youth section. In 1934, when the fascists gathered in Market Square with the intention of marching through the city, Fred's group, together with many progressive labour organizations, encircled them and berated them with labour songs. A riot broke out, several fascists were injured, and they never tried to march in Winnipeg again.

After working several years at Purity Ice Cream, Fred and Gertie moved downtown and opened a food stand on McDermot Avenue, selling corned beef sandwiches for 10 cents each. They then opened the Bright Spot Deli and Grocery on Graham and Edmonton . Although Fred worked 18 hours a day, they barely made a living.

Their circumstances began to improve when Fred took a job as a traveling ladies wear salesman and eventually bought out Rusoff and Bronstone Sales Agency. They bought a house on Burrin Avenue and Gertie stayed home to care for their children, Kenneth and Janice. Today Kenneth is a Nazi war crimes researcher living in Montreal and Janice is a medical doctor living in California. Gertie and Fred are now great grandparents, as Janice's son and daughter each have a child.

After 33 years on the road, Fred retired in 1978. Since then, he has taken a course on fiction writing at the University of Winnipeg and has had more than 60 short stories published. He also became active with the only Yiddish speaking B'nai Brith branch in North America and with the mamaloshen group of the United Jewish People's Order. While he had to give up that involvement when he moved into the Sharon Home, he has now started the first ever Yiddish Cultural Club at the home. Although this has involved a lot of work, Fred was motivated to start the club by his love of the language and his desire to honour the six million who perished in the Holocaust. Fred also spends his days reading voraciously in English and Yiddish, visiting with friends and spending time with his beloved Gertie. And every Saturday, all year long, he ventures out to buy her flowers.