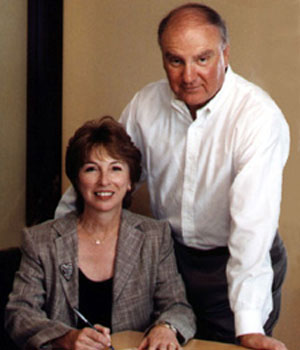 Like so many other families before us, ours is a tale of immigration. Our grandparents all came from the "Old Country" in the 1920's and struggled to establish themselves and set down roots in Winnipeg. Israel and Freda Lomow, Nathan and Molly Dubovsky, Moses and Catherine Popeski and Sam and Annie Greenberg were hard working good people to whom close family ties and Tzedakah were of great importance.

Each set of grandparents was actively involved with the causes of their day. Israel Lomow, as one of 37 kosher butchers in Winnipeg, was the president for many years of the 'Butcher's Shul', and Sam and Annie Greenberg were founding members of the Hebrew Sick Benefit Association and the Independent B'nai Abraham Synagogue.

Our parents, Jack and Sue Lomow and Harvey and Rose Popeski, all the while working hard and raising three children each, were active in their synagogues and the various Jewish organizations that bound our community together. With this background of commitment to family and community we have endeavoured to live by the example our parents and grandparents set down.

Monty graduated from Commerce at the University of Manitoba and pursued a successful career of 36 years as regional manager of Manulife Financial. He continues in the insurance business today along with our son Mark. Gerry graduated from the Mount Carmel Clinic as an X-ray technician.

We married in 1964 and have two children, Mark born in 1968, and Jill, born in 1972. Mark and Jill both attended Ramah Hebrew School and Kelvin High School. They each graduated from the University of Manitoba and are actively pursuing their chosen careers. As teenagers, they energetically participated in BBYO - becoming regional presidents respectively in AZA and BBYO.

Monty was active on the board of Ramah and Gerry with Hadassah and the board of the Women's Endowment Fund of the Jewish Foundation of Manitoba. We have the start of the fourth generation in Winnipeg. Mark and Laura (nee Gaudy) are raising a daughter Jordan and son Brendan. They, as a family starting out, are already involved with our community and the community at large.

It is our fervent wish to see our Jewish organizations thrive into the new millennium - and for our children and their children to continue to work for, and gain as much fulfillment as we have, in what we know is a truly unique community.