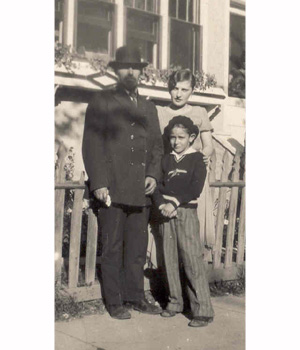 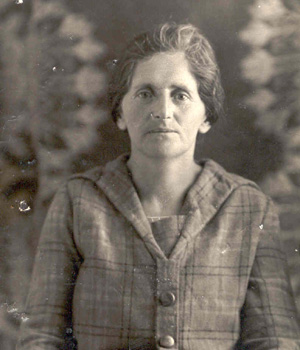 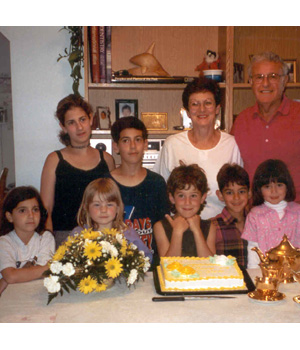 George and Gloria and 7 out of their 8 grandchildren 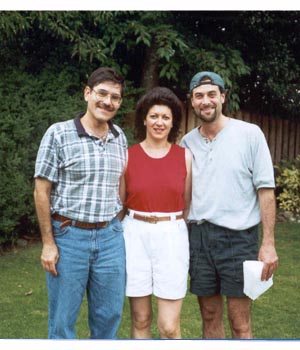 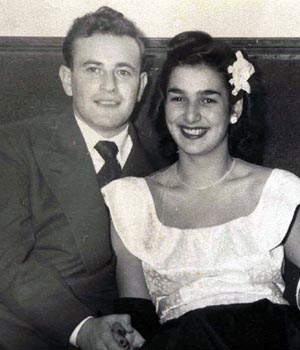 George and Gloria 2 years prior to getting married (1947)

George Gershman is enthusiastic. All other information pales against this enthusiasm. The youngest child of six children born to Sam and Freda (Pasmanak), George was the only one born in Winnipeg and according to his own words there was nothing too good for "Gershen Gershman". George's parents were born in Russia. Sam came to Canada in 1917 and went to work and saved his money so that four years later he could bring his wife and five children to join him in Winnipeg on Manitoba Avenue. It was there in 1923 that George was born.

George remembers his father, a self-employed plasterer, as an orthodox man who daily went to synagogue and always worked, except Friday afternoon when he prepared for the Sabbath by going to the steambath. His mother shared the orthodox manner and spent her days mothering six children and being a receptive listener to all her friends who sought her advice. The Gershmans had a warm and loving relationship. The home was a neighbourhood drop-in to listen to the first radio on the street or use the first telephone. The extended families lived in rural Manitoba and used the Winnipeg Gershman's home as their "home away from home". This was George's first introduction to the hotel industry.

George remembers enjoying his childhood. Starting school at William Whyte, George went on to Aberdeen, St. John's, and then United College from which he graduated with University of Manitoba degrees in both Arts and Social Work. All through these years George had a strong sense of his Judaism. He believes that it was a natural outgrowth of his family, his Friday and Saturday synagogue attendance and his positive experience with the "Eagles". The Eagles was an athletic, educational and social group of Jewish boys that provided George with a stream of fond memories and positive experiences.

Prior to graduating from Social Work in 1948, George had been in the air force and had also worked in a number of part-time shoe salesman positions. In one such position he met Gloria Lipchen, the woman who was to become his wife and the person George credits as allowing George to become the person he is today. Together they raised three wonderful children, Darryl, Shelley, and Stuart, and have eight grandchildren.

With a degree in one hand and a wife in the other, George successfully applied for the first executive director's position of the Shaarey Zedek synagogue. He also took on the role of youth director at the synagogue. After nine years, George took on a similar role in Florida for three years before returning to Winnipeg and a twenty-year career with Glendale Golf and Country Club followed by fifteen more years as the general manager of the Charterhouse hotel.

How George became known as Mr. Manitoba has do with his personality and how he treats all people. George has spent his life in what he describes as "service to others" careers. George feels that there is no industry as valuable and enjoyable as the tourist industry. The Mr. Manitoba designation came from his involvement with all levels of government dealing with tourism issues. George has led his life with a desire to treat people with compassion, interest and respect. He always wants to leave people with the feeling that it was a pleasure to do business with George. He is always available to people and feels that it is his purpose to match the individual with a task ... his greatest acts of charity are to find a person a job. These are the characteristics for which he wants to be remembered. Various organizations have acknowledged these positive attributes by inducting George into four honorary life memberships.

In regards to the Winnipeg Jewish Community, George encourages compromise. From his understanding of life and how things get accomplished, George believes that checks and balances are necessary if we are to have as vital a community as possible. George believes that the Jewish community must recognize that we are a part of a larger community and must understand that we cannot exist as an island unto itself.