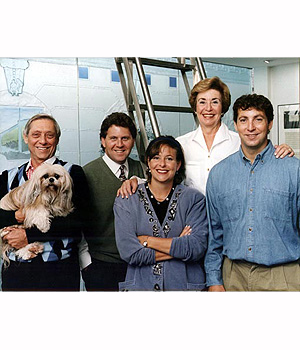 Gail with parents Babs and Izzy Asper, and brothers David and Leonard 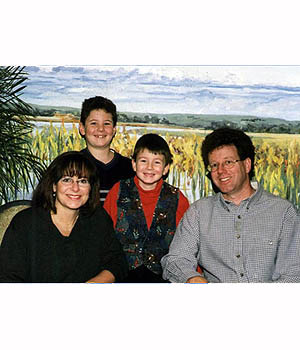 I was born in Winnipeg where I grew up with my brothers David and Leonard. I attended elementary public schools in River Heights and then Kelvin High School and was active in USY for about four years. After high school I continued my studies at the University of Manitoba, graduating from there with degrees in arts and law. I practiced law until ten years ago when I joined the family business, CanWest Global Communications Corp, as an executive. I married Michael Paterson in 1984 after which we moved to Halifax for five years where I practiced law while he obtained his Ph.D. in biology from Dalhousie University. We have two wonderful sons, Stephen, born in 1990, and Jonathan, born in 1993.

In addition to my work I have been active on numerous volunteer boards, including the board of the Manitoba Theatre Centre, acting as president for a two-year term from 1996-98 and as co-chair of the Capital Endowment Campaign. For me and for my family, the performing arts have always played an important role. Theatre and music have always enriched my life and made me a willing volunteer on their behalf. Recently I have also served as a member of the Combined Jewish Appeal Cabinet Campaign and as a general volunteer, and as the 1998 chair of Leadership Giving for the United Way.

I learned by example about community service from my parents, Israel and Babs Asper. My father is a lawyer by profession and a former provincial politician. He is the founder of the international media company CanWest Global Communications Corp and of the private charitable Asper Foundation. He has been awarded numerous honours over the years including an Order of Canada and an honourary doctorate from the Hebrew University. My mother, the former Babs Bernstein, has been active with Canadian Friends of the Hebrew University, the Winnipeg Jewish Community Council and the Winnipeg Jewish Theatre. She is a saint for putting up with all our family's activity over the years and never losing her poise, common sense or kindness. All of my grandparents, Cecilia and Leon Asper and Sara and Maurice Bernstein, immigrated to Canada from Russia in the early 20th century.

Some of my fondest childhood memories revolve around my family's celebration of the Jewish holidays when our cousins, aunts, uncles and grandparents would gather together to share in the stories of our Jewish history, sing the traditional songs and, of course, enjoy the delicious traditional holiday foods.

I hope that in the future people will think of me as someone who cared about her family and friends and the Jewish community and the community at large. My parents have demonstrated that it is possible to raise a close family and at the same time ensure that time and money is contributed to making the entire community a better place to live. I hope to follow that example and instill in my children these same values so that generations from now, in some small way, the world will be better than it was before.