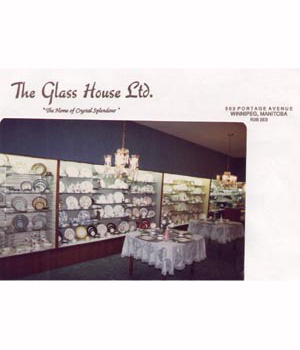 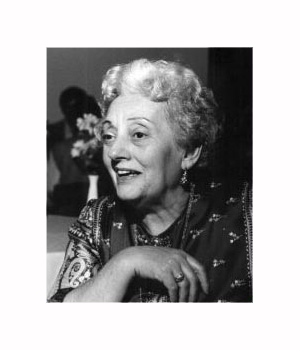 My working life began at the age of 13, when I went to work labelling coffee cans at the Red Rose Coffee & Tea Company. I then went to school and to Gregg College at night to learn to type, and got a job doing the payroll with Foley Bros., a company that was building bridges in the city. It was around 1930 when I worked at The Bay in the Pipes and Tobacco department that I met and married Harry Wright.

Harry and I ran a little grocery store and also took other jobs - Harry at Oretzki's and I at "The Osborne Book & Variety Shop", but we were already dreaming of a new business. Eventually we sold the store and our little home on Lansdowne Avenue, and in 1955 began to put our plan into action.

In 1955 I went to the Chicago Merchandise Mart and went into a crystal display at Fostoria Glass Ltd. in their beautiful new showroom. I was very interested and they gave me designs and other information and recommended that I visit Marshall Field's department store in Chicago and speak to the manager there. I did this and the manager's advice was very helpful. I came home and got Sasaki Display Fixtures to build a small display for a little shop on Kennedy Street. Then I went to the Toronto Gift Show and New York Merchandise Mart on Fifth Avenue where I made many connections and placed some orders.

In 1956 The Glass House opened with the best crystal lines available. Two and a half years later we moved to 416 Graham Avenue near The Bay and I added china, silver and antiques. Each year was like a university course — I met wonderful people and listened and learned a lot. I started to go overseas to bring in antiques and to go to the Worcester and Derby potteries north of London, where I ordered my china. Customers used to wait for me to come home to tell them what I was able to purchase.I spent much time in Scotland and Wales. After purchasing my antiques I made arrangements with shippers to pick them up and ship them to Winnipeg. In particular, I remember Thomas Meadows Shippers & Packers. I also shopped in France, Italy, Germany, Spain and Portugal. It was a difficult but fulfilling time.

For 27 years I built up the business on Graham Avenue. It was a sad time for me when the owners of the building died and the building was sold and in the winter of 1984 I had to move the business to a new location. Although I continued the business for another ten years, the location was not as good as I had hoped. At the end I sold my merchandise, paid everyone what they were owed and I feel I walked out like a lady with a good name. I was always interested in my customers, and people still stop me on the street to reminisce about the business and many thank me for the beauty I added to their life.

My poor husband was sick for 22 years but was a good, kind, understanding father and husband. He supported me throughout the busy years of my business. I remember in the 1960's Japanese flower arrangements were popular, and I took a course and then would go to the store in the evenings, taking all my equipment and sprays of greens and flowers and work late into the evenings, and Harry would go with me to keep me company.

I am very proud of my sons, Gerald and Errol and their families. In spite of the busy life I led, I loved to watch them grow up and was always happy when the neighbourhood boys congregated at our house to play cards and music, and eat my lemon pie and chocolate cake. The front lawn was covered with bikes.

The Glass House was very much a part of Winnipeg's business landscape for four decades. I am happy and proud to have had the opportunity to contribute to my community.