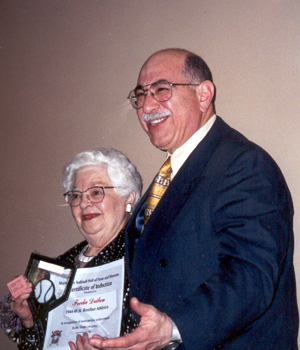 Freda and her son Paul 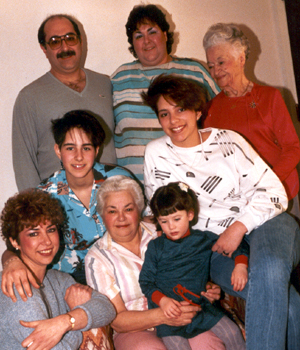 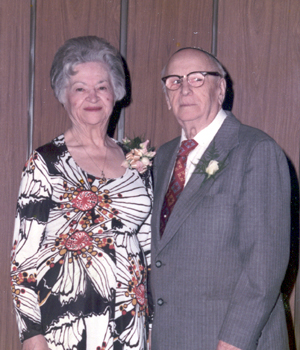 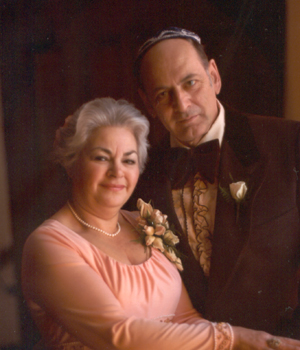 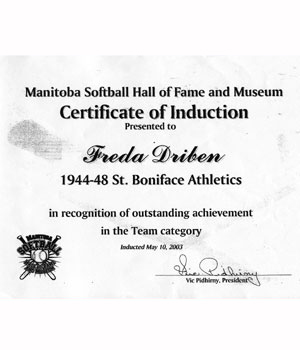 Freda (Fritzie) Driben (nee Hirsch) is a small town girl at heart. Two small towns figure prominently in her life - Kamsack, Saskatchewan, where she lived until she was seventeen, and Portage La Prairie, Manitoba, where she recently was inducted into the Manitoba Softball Hall of Fame.

Freda's parents, Sam and Sophie, arrived in Canada under different circumstances. Pogroms in Rumania forced Sam to leave when he was just a boy. Arriving in Canada alone, with no money, and limited language skills, he quickly adapted to life in his new country. Sophie, on the other hand, came from Russia via Indianapolis with her parents, Eli and Pessie Plotkin. How Sam and Sophie met is open to question, but Freda vividly remembers her parents' personalities. Sam loved to sing and dance, to enjoy life to the fullest. And he was a trickster, there was no length to which he would not go to play a trick on someone. This was relatively easy to do because Sophie was the conscientious one in the family, a hard worker, she provided the balance in their relationship. Altogether they had five children: Freda sandwiched between older siblings Sid, Mildred, and Fanny, and younger brother Norman.

Soon after Freda was born the family moved to Kamsack, Saskatchewan, where her parents ran a boardinghouse until the Great Depression forced them to return to Winnipeg. But Freda has fond memories of growing up in the small community. Her mother's parents also lived in Kamsack, and despite the fact that there were few Jewish families in town, Freda always knew that she was a Jewish girl. She remembers celebrating all the Jewish holidays at her grandparents, how her mother maintained a kosher home, and how she learned Hebrew from her Zaida.

All of Freda's schooling was in the public system, and it was there she first discovered her athletic skills. Her love of athletics has stayed with her throughout her life and has provided her with countless positive experiences, many friends, and a sense of personal accomplishment. As she recalls her athletic experiences she remembers how she jumped five feet in the high jump, twenty-nine plus feet in the hop, skip, and jump (now the long jump), and only lost one foot race ... when she stepped in a gopher hole. It was her speed that put her in the outfield when she took up playing baseball, her lifelong passion.

One day, shortly after Freda had returned to Winnipeg with her extended family from Kamsack, she met a young man who was selling schoolbooks on the corner of Redwood and Salter. This encounter with Harry Driben was the beginning of a five year courtship that resulted in a forty-four year marriage and two children.

Paul, her son, is Professor of Anthropology at Lakehead University in Thunder Bay, and, with his wife Carol (nee Elston), has provided Freda with two grandchildren, Bonnie and Lisa, and four great grandchildren, Doug and Russel (Bonnie's sons), and Eve and Quinn (Lisa's twin daughters). Freda speaks proudly of her family's accomplishments, including those of her son, the author of six books, and her late daughter Enid, who tragically passed away at forty years of age. A social worker in Edmonton, Enid supervised the intake of children into the adoption system, and spoke frequently at schools to help "street proof" children who were at risk. She died leaving a young daughter, Hillarie.

In the late 1930s Freda did a strange thing for a young Jewish girl in Winnipeg at the time. She started to play organized softball, which she continued during her early married life, while her husband Harry served in the Royal Canadian Air Force, and later, while she and Harry worked and raised their children. Starting by answering a 1937 ad in the Winnipeg Tribune for players for the CUAC (Canadian Ukrainian Athletic Club) Blues, Freda played until the early 1950s, switching in the mid-forties from the Blues to the St. Boniface Athletics, where she and her teammates enjoyed a string of championship years. As testament to her skill Freda was inducted into the Manitoba Softball Hall of Fame at a moving ceremony in Portage La Prairie, Manitoba, in the spring of 2003. Freda is especially proud of the fact that she was the only Jewish girl in the league. Her scrapbook is full.

Freda believes that when her name is mentioned people will remember her as a baseball player and fan, however, she has also has a message for young children, "get an education." This is a philosophy that she has always preached and handed down to her children and grandchildren. "There are some things that can never be taken away from an individual," Freda says, "education is one, memories are another."

Freda is pleased to be able to participate in the Endowment Book of Life program, to provide an historical record of the Driben/Hirsch family, and to help support a secure community for generations to come.