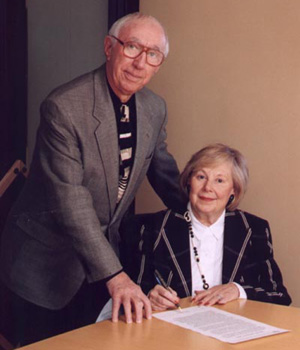 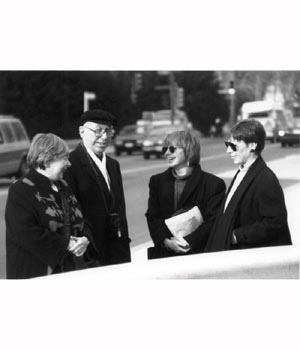 Jerome Cohen was born in Winnipeg on January 27, 1922, the son of Carrie (Seipp) and Max Cohen. Max was of Russian birth, one of the five sons of Jennie (Berman) and Reuben Cohen. Carrie was born in Winnipeg, the youngest of the six children of Minnie (Yundelier) and Louis Seipp who immigrated from Poland.

Following receipt of his University of Manitoba Commerce Degree (now the Faculty of Management) he entered the family business, Manta Industries Ltd., where he was later joined by his sister's husband Mel Guberman. They remained partners until the sale of the business in 1996.

At the University, he was an active member of Hillel, the Drama Society, chairman of the Glee Club, as well as being the proud winner of several table tennis championships. As a member of Sigma Alpha Mu Fraternity (where he served a term as "Prior") he was involved in its Winnipeg convention in September 1950, to which he invited Frances Lyon of Worcester Massachusetts. He had met her when she visited Winnipeg in 1948 to attend her cousin Rhea Shinoff's wedding. Fran and Jerome were married in Worcester on January 2nd, 1951.Fran was born in Worcester on July 10, 1928, the daughter of Anne (Cotton) and Myer Lyon. Myer was of Lithuanian birth, fourth of the seven children of Rachel (Grece), and Boruch Josef Lyon. Fran's mother was born in Worcester, one of the four daughters of Pauline (Bornstein) and Max Cotton, who also immigrated from Lithuania. In 1932, Fran's sister Pauline was born, coincidentally, she also married a Winnipeger, Ernest Guld.

Fran attended Classical High School, then Mount Ida Junior College, transferring to Syracuse University. Her interest was always in retailing, and her employment began as a buyer at Filene's Department Store. Later in Winnipeg, Fran's work became "volunteer", with Hadassah, Shaarey Zedek Sisterhood, and her special passion The Technion (Israel Institute of Technology) where, in 1984, she became an Honorary Fellow of the Technion, and is now an Honorary Life Member of the Board of Governors.

Fran and Jerome were both active at Glendale Country Club and Shaarey Zedek Synagogue, Jerome headed both as President, while Fran had the pleasure of organizing many social functions at both organizations, particularly major anniversary celebrations. For a time, Fran acted as buyer, seller and manager at the Synagogue gift shop.

Their communal interests were strongly influenced by their parents' dedication to the Jewish communities in which they lived. Jerome's father was president of the Jewish Welfare Fund and the YMHA, his mother was president of Hadassah's Ezra Chapter. Fran's parents were early ardent Zionists, Myer being one of the original signers of the New England Zionist Manifesto, and Anne as president of Worcester Hadassah.

Fran and Jerome have two daughters, Paula May born May 22, 1952, and Roberta Sherri born April 23, 1955. Paula earned her undergraduate degree from Kirkland College in upstate New York, and her doctorate degree in European Intellectual History from Claremont Graduate School in California. She resides in Washington, D.C. and is employed by the U.S. Department of Justice. Roberta earned her undergraduate degree in International Business and Marketing from the University of Colorado, and completed her M.A. Management studies at Redland University. She has worked for several major cosmetic firms, and presently has her own business. She resides in Studio City, California with her husband Richard Ciera.

Both Fran and Jerome are concerned about the future of Winnipeg Jewry with its declining population. They are hopeful that the building of the Asper Jewish Community Campus will bring forth new leaders who have the vision, foresight and dedication of their predecessors.