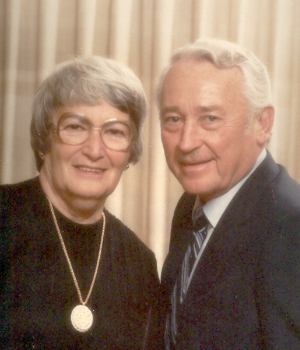 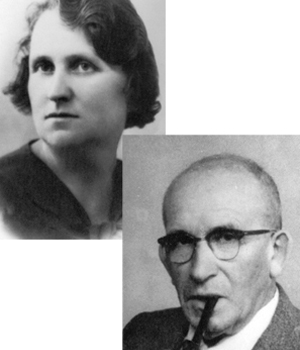 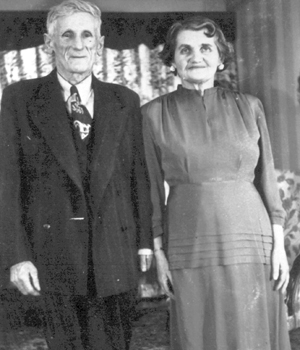 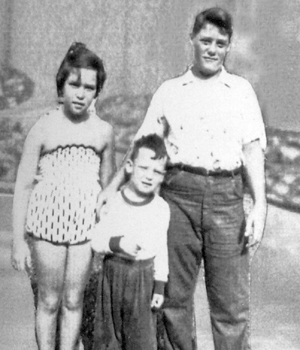 The Glesby Children, L to R: Erla, Harley and Zenith 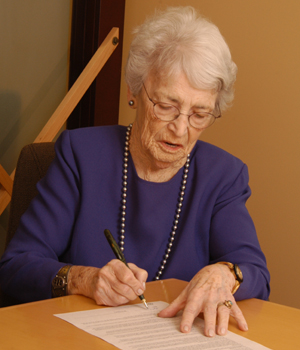 My mother and father, Zina and Fred Ginsburg were both born in Russia and immigrated to Manitoba. My sister, my brother and I were raised in the heart of Winnipeg's north-end where we learned to get by with very little. My father earned a modest living as a decorator. While not orthodox, he was very aware and proud of his Jewish heritage. My mother died when I was seventeen, and I recall her, affectionately, as a devoted wife and mother. My sister Eva (Brownstone) also died young, while only in her twenties. Sam, my brother, was a musician for several years, and he presently lives in Oakland, California.

Growing up in Winnipeg:

I studied at Machray Elementary and St. John's High School by day, and in the evenings I attended and graduated from Peretz School. I was actively involved at the 'Y', and it was there, at a dance, that my future husband Bill and I began courting.

We were married in Winnipeg during the winter of 1940. Bill came from an orthodox family, and his mother taught me 'kashruth' to enable us to maintain a kosher home. Bill took a clothing design course and, shortly thereafter, along with our first-born child Zenith, we moved to Portage la Prairie. While Bill worked for a clothing manufacturer I looked after our household. We had two more children, a daughter Erla and a son Harley. After a number of years, Bill was encouraged by his boss, Max Shore, and ultimately agreed to buy out his facility. At one point, just after fabric had been purchased for the following clothing season, a chance fire gutted the plant, consuming all of its contents. At a crossroads in his career and experiencing first hand the process of dealing with a tragic setback, Bill moved on to become an insurance adjuster and later founded a General Motors automobile dealership. Over time, these and numerous other business opportunities resulted in financial security and a comfortable life-style for our family.

Bill canvassed a few local Jewish families, with the intent of establishing a synagogue and providing for a rabbi and a 'khaddar' for our children's Jewish education. Soon after, our tiny Jewish community of twenty-some families founded the Beth David Synagogue. For many years a series of Rabbis were contracted, on an annual basis, to live full time in Portage. As a result our children were amongst the first of many to celebrate their B'nai Mitzvot in Portage la Prairie's little 'shule'.

I donated my time to become involved in the Portage Hadassah group, where we raised funds. I can tell you that nobody did bazaars quite like we did in Portage. Several Winnipeg Hadassah members would even attend our bazaars in Portage, as they were so successful and very enjoyable. On several occasions, when I was presiding over our Hadassah chapter, I was honoured to attend national meetings in Montreal and Toronto.

In 1945, Bill and I were fortunate to enjoy our first of many cruises. After Bill became semi-retired, he and I resided at our winter home in Grenada, West Indies, from 1971 through 1984. Subsequently, we spent thirteen winters at our residence in Palm Springs, California.

Bill and I were fortunate to travel to Israel on three different occasions. Early on, we made a decision to support a kindergarten program in the town of Or Yehuda outside of Tel Aviv. Since that time, we always looked forward to seeing pictures of the kindergarten, as it progressed through various upgrades, along with the drawings and letters of thanks sent by the kindergarten's children. I look forward to receiving these packages even today.

Amongst Bill's most successful business enterprises, he founded a handful of multi-temperature warehouses in Manitoba, Saskatchewan and Alberta. In 1990, Bill and I moved to Winnipeg, where we enjoyed our last six years together. Bill passed away on May 6th, 1996. Presently, I am proud that two of our children, Erla and Harley Glesby, own and operate the warehousing and distribution business that Bill established.

In 1998, an addition to the complex resulted in the construction of a 400-seat theatre for the performing arts. The facility was named the 'William Glesby Centre' in honour of Bill, while the 'Fimi Glesby Theatre' was dedicated to me. To this day, I enjoy attending various functions at this wonderful complex, and seeing the pleasure that this facility has provided the residents of Portage and the surrounding communities.

The Joys of Giving:

I feel fortunate that Bill and I had the opportunity to make a difference both in our community of twenty-nine years, and in Israel. Nothing is quite as enjoyable as being able to see the benefit of one's gift of time and money. Since Bill's passing, while I have not been active in Hadassah for many years, I have continued to support both the Glesby Kindergarten in Israel and the Glesby Centre in Portage la Prairie. I am confident that my three children, nine grandchildren and four great grandchildren are and will remain proud of Bill's and my commitments, and that they will continue to maintain these very worthwhile projects.

I have recently moved to Portsmouth residence, and I enjoy passing my time with my children, grandchildren and great grandchildren as well as playing Mah Jong amongst my friends.

'Yiddishkeit' and having Jewish people around me, in my life, is very important to me. I very much enjoy the time I spend at the Asper Jewish Community Campus, and I appreciate the impact that the campus has had on revitalizing Winnipeg's Jewish community. Even so, I worry about the stability and the safety of Israel and her peoples, and so I pray for peace.

Thank you for your interest in my story.