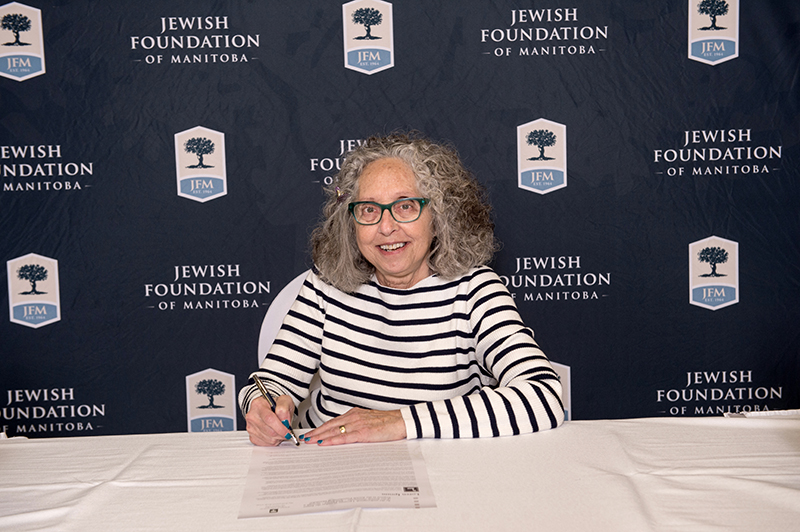 "Be where you are". It's one of Joel Lazer's written principles — a principle shared by his wife, Faye. It speaks to being present, mindful, generous, and grateful for what life has to offer. That is the story of Faye and Joel.

Faye was born in 1950 in Gronlid, Saskatchewan, a farming community near Melfort. Her parents were Norman and Florence Vickar (née Zeitlin). Norman was the son of Sam and Gertrude Vickar (née Gelman). Sam was born in Lithuania; Gertrude in Russia. Florence was the daughter of Aaron and Rebecca Zeitlin (née Bass). Aaron was born in White Russia; Rebecca in Ukraine.

Faye was raised with her older brother Larry, and her twin sister Reva. She recalls a playful childhood and taking food out to the farmhands during harvest time. At a very young age, Faye and her family moved into Melfort where she lived until it was time to go to university. Faye and Reva moved to Winnipeg and shared an apartment near Osborne Village. Faye started studying nursing at the University of Manitoba, but quickly switched her focus to education given her love of children. After graduation, she taught nursery kindergarten for 34 years at Victoria Albert, River Elm, King Edward, and Glen Elm.

Joel was born in 1949 in Winnipeg, the son of Louis and Luba Lazer (née Krivoshea). Louis was the son of Charles and Sarah; Luba was the daughter of Harry and Fanny. Joel fondly remembers holiday dinners at Bubbie Sarah's apartment on Cathedral and Main (where there would be animated discussions about who had to help clean up); and he remembers making knishes with Bubbie Fanny. The grandparent who left the greatest impression, though, was Zaida Harry. Always around, always attentive to his grandchildren, always willing to do what they wanted to do (including spontaneous drives to Selkirk for chips). Zaida Harry, says Joel, is his role model for how to be a Zaida today. Harry also worked at a wholesale and supplied Joel with eggs for an egg route; Joel would package and deliver eggs at the princely sum of 10 cents a dozen. (Pesach was peak season, Joel recalls.)

Joel was raised with his brothers, Michael and Charles. He attended I.L. Peretz School, Edmund Partridge, and West Kildonan Collegiate, and then graduated from Garden City Collegiate. He went right to the University of Manitoba and majored in psychology. Classroom appearances were rare, and Joel instead focused on passing the exams. His grade point average at the time reflected his academic habits. Joel's parents moved to California near the beginning of Joel's academic career, so he moved into the top floor of Zeta Beta Tau's house on Wolseley Avenue, ZBT being the Jewish fraternity.

After graduating from U of M, Joel sold insurance for three months and sold a grand total of one policy (to himself!) before turning his attention to accounting. He moved to California for a year to take business courses at the University of California (Fullerton) before returning to Winnipeg. This time it was a 4.0 GPA and a new outlook on his career. He became a partner in the firm of Winspear Higgins Stevenson & Co in 1977, which merged with Deloitte Haskins & Sells in 1980. Joel and others demerged later to form Singer Lazer & Grant, operating today as Lazer Grant.

Faye and Joel married in 1987 at Birch Island Resort in Minaki, Ontario. They formed a new family with Faye's son Lawrence (Cohen), born in 1982, and Joel's daughters, Jilda (1976) and Sara (1978). Today, Lawrence lives in Winnipeg and is married to Szandra; Jilda and her husband Cameron are the parents of Noa and Eli; and Sara and her husband Chris are the parents of Elliot, Lila, and Simone. Jilda, Sara, and their families live in Toronto.

For Faye and Joel, being active grandparents is a key priority in life. They see the children at least once a month with frequent travel between Winnipeg and Toronto, and vacations together in Florida. Faye and Joel have also travelled to Israel nine times, and Joel goes on an annual retreat to Montreal to think about his goals and his values. The practice is something from which he knows everyone could benefit.

Faye and Joel believe in giving back to the community. Once a week, Faye volunteers reading to young children at Aleph-Bet Child Life Enrichment Program. Joel is a former member of the Bnay Abraham Synagogue Board and today sits on the Congregation Shaarey Zedek Board and is also Chair of the Finance Committee. He is also the Vice-Chair of the Jewish Federation of Winnipeg; Co-Chair of the Federation's Community Relations Committee; and a member of the national Board of the Centre for Israel and Jewish Affairs.

In their spare time, Faye and Joel both enjoy reading, and Joel dabbles in the kitchen. They enjoy going to Jets games and virtually every major concert in the city. They care deeply about Israel, about the local Jewish community, and about making sure that newcomers are welcomed to the community with open arms. They believe that everyone must get involved in community life in some way to ensure the community's long-term success.

Faye and Joel truly are where they are, enjoying life, giving back, and setting an example for future generations.