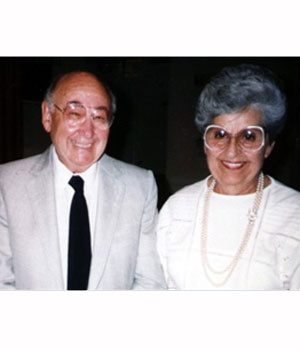 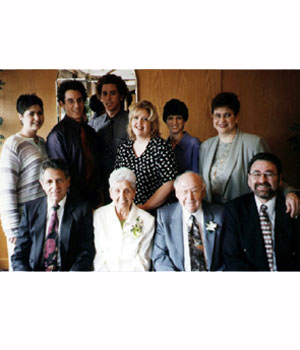 My family first lived in Elmwood and then moved to the North End where, with about a dozen other families, they formed their own small ghetto. My father worked for the city at various jobs and my mother operated a small store, where Faye's mother also worked. Both these women did a lot of charity work and taught their children to do the same. I remember that while the Depression was very difficult, it was somewhat mitigated by the fact that everyone else we knew was going through a rough time as well.

I attended Machray School and St. John's Tech, then got a job at Freed & Freed. After I worked there for about sixteen years, Ben Sissman invited me to go into business with him. Using the $1,400 I had saved, another $100 that my mother gave me, and the $1,500 Ben received from his family, we started Acme Garment Company in 1945. Ten years later I bought Ben out. Originally we made work clothes, then switched to casual wear, and thrived during the jeans era of the 1960s. Although it was sometimes a struggle to run my own business, I ultimately succeeded.

Over the years I have worked hard and belonged to many organizations. I have also volunteered my time and given financial support to causes I believe in, such as the JNF and the Six Day War campaign. I served as president of the Garment Manufacturers' Association, have attended several of the local synagogues, and have conducted services at the Winnipeg Beach synagogue and in Florida. I served as a director of the YMHA 50th anniversary celebrations, and am a member of the B'nai B'rith Century Club. I have also visited Israel four times.

I have great pride in our Jewish community, and my hope for the future is that the coming generations will see the value of what the present generation has built. I encourage them to take an interest in community life and organizations, to volunteer their time and energies to bettering their community, to make helping others a way of life, and to find joy in giving to charity.