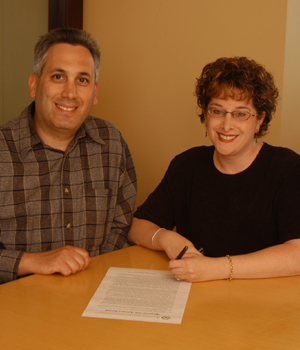 Fayanne and Avrom Charach sign their Endowment Book of Life 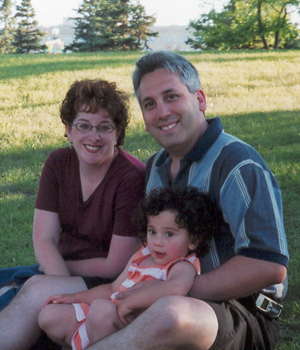 Fayanne, Avrom and Carli, July 2003 at the Forks 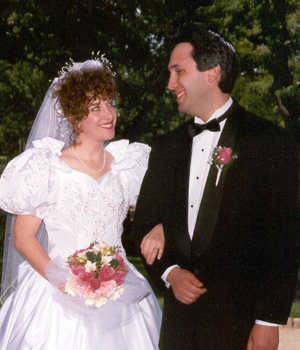 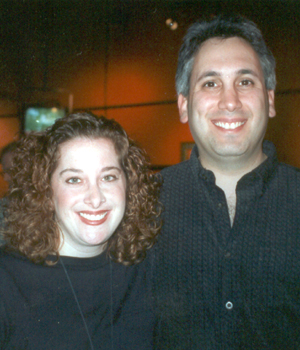 Fayanne and Avrom, October 1999 at a party celebrating Avrom's completion of the CGA program of studies 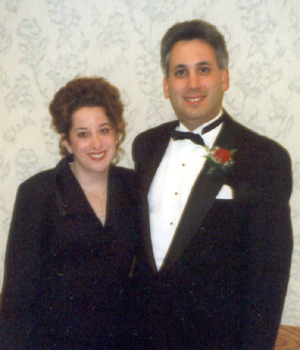 "If we want the community to be active and vital for our children, then we have to ensure that we leave it in better shape than when we found it."

This is the philosophy that both Avrom and Fayanne (Abrams) Charach have adopted. They are both involved in the Winnipeg Jewish Community, however they came to their involvement from different directions.

Fayanne is the youngest of three daughters, her sisters are Shari and Moleigh, born to Bill and Beverly (Resnick) Abrams. Growing up in River Heights, Fayanne recalls that her father, who worked his whole life for Ricki's, remained very much involved with his children's lives. He passed away after a long fight with coronary disease before Fayanne and Avrom got married.

Today Fayanne recognizes that although her family had adult concerns, she had a very normal childhood. Her mother was always home when Fayanne came home from school, her father spent much time with his girls on evenings, weekends, and holidays. The family traveled together, and enjoyed time at their cottage. While she did not obtain a formal Jewish Education her family made a point of going to Shul and celebrating Jewish Holidays together. Fayanne was involved with Kadima, BBYO and USY as a teenager. She fondly remembers her summers at Camp Massad and at Camp Herzl in Wisconsin.

Graduating from Grant Park High School, Fayanne's fondest school memories were of time spent with her friends, this convinced her that her strengths were in human relationships. As such, she worked in retail after high school until she studied administration at Red River Community College. Fayanne has since pursued employment in customer service. She now works part time, balancing work with family time. She feels very strongly that parents should be integrally involved with their children's development, especially in their early years.

Fayanne spent many years volunteering for the Heart and Stroke Foundation, the Israel Pavilion at Folklorama and as a member of the Tzevah Chapter of Jewish Women International.

Avrom was one of three children, sisters Gayle and Lori-Sue, born to Barney and Ruth (Katzman) Charach. Avrom's memory is of very dedicated parents, his mother worked to assist Barney in becoming a Chartered Accountant and then spent many days and evenings with the children while Barney provided for the family's financial needs and volunteered in the Jewish and Secular communities. It was from his mother's work with the National Council of Jewish Women and PTA and his father's volunteer activities that Avrom learned the importance of community and volunteerism.

Avrom's education was firmly rooted in the Winnipeg Jewish School system. He started junior kindergarten at Talmud Torah and graduated from Joseph Wolinsky Collegiate in 1984. He stayed in the community educational system except for a year spent at Kibbutz Kfar Blum in Israel. For as long as he can remember, Avrom has been involved in the running of programs or events in the community. Returning from Israel to complete grades 11 & 12, Avrom immersed himself in larger and wider community activities. Eventually he parlayed his technical skills, coupled with a theatre degree from the University of Winnipeg and an unbridled enthusiasm for being involved, and undertook a series of roles from Y kids' worker to Coordinator of the Israel Pavilion, Folklorama. He recalls his time spent on the Manitoba Ethno-cultural Youth Committee as his most eye opening volunteer experience, it exposed him to more than Jewish community involvement, introducing him to the importance of multi-cultural relationships.

After an experience as a paid employee of the Jewish Federation Avrom began his career in the private sector, allowing him to use the skills he gained while obtaining his Certified General Accountant designation. His ultimate goal is to spend time with family and friends, while being financially stable, providing for his family and for the community at large.

Fayanne and Avrom hope that they will instill a strong Jewish and Social belief system in their family and will ultimately leave the community of Winnipeg a better place than they found it.