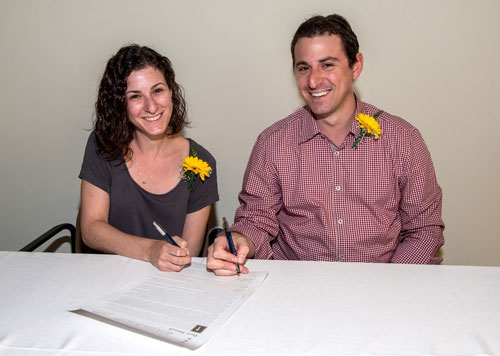 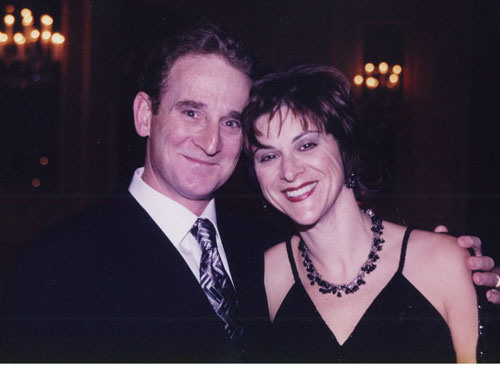 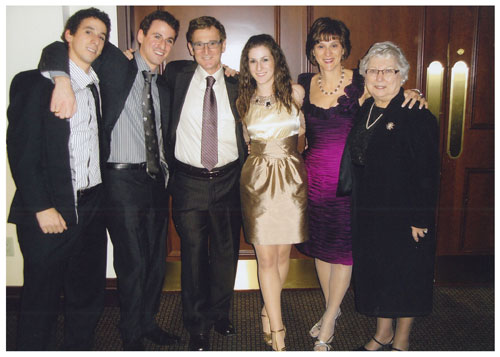 The marriage of Fay-Lynn and the late Dr. Philip Katz was one of deep joy, love, and friendship. While Phil's life was tragically cut short, Fay-Lynn honours his memory through her strength of character, her perseverance, her commitment to their three children, and through community service.

Born in 1959, Fay-Lynn is the daughter of Mayer and Toby Gutwilik. Mayer was born in 1920 in Turobin, Poland, and died in Winnipeg in 2014. When World War II broke out in 1939, Mayer and his family fled. Mayer escaped a refugee ghetto with his brothers, and lived for two years in the forests of eastern Europe, surviving as freelance lumberjacks. He was drafted into the Russian army and then shipped off to a remote work brigade when it was discovered he wasn't Russian. After the war, he made his way to Saskatoon after a short stop in Paris. In Winnipeg, he worked mainly as a tailor, and twice ran a grocery store with his wife.

Fay-Lynn's mother Toby (née Lebovic) was born in 1927 in Czechoslovakia. A strong and remarkable woman, Toby walked out of Auschwitz in 1945, ultimately making her way to Saskatoon in 1949. After settling in Winnipeg with Mayer, she worked as a grocer at Toby's Grocery, then Corydon Grocery, and then as a dietary aide at the Sharon Home. In more recent years, she took care of Mayer at home as his health declined.

Fay-Lynn grew up on Burrin Avenue with her brothers, Jack and Hersh. She attended Peretz School, Jefferson Junior High, and West Kildonan Collegiate. Her youth was filled with piano lessons, baseball, BBYO and USY events, day trips to Winnipeg Beach, and simply playing with friends. After high school, she went to the University of Manitoba where she earned a law degree, following through on a decision made in junior high.

Phil Katz was born in Winnipeg in 1954 to Morris and Esther Katz. Morris was born in 1925 in Winnipeg. Morris was raised in Yorkton, Saskatchewan, ultimately moving back to Winnipeg and running Y-Not Groceries on Ellice. He was a hard-working and soft-spoken man. Morris passed away in 1985. Phil's mother Esther (née Shore) was born in Winnipeg in 1930 and managed the family home on Enniskillen Avenue where Phil and his late brother David were raised. Sadly, David passed away as a young man in 1982. Phil attended Talmud Torah and Joseph Wolinsky Collegiate. It was a happy childhood that featured a stint in the renowned Talmud Torah Choir of Cantor Brownstone and many wonderful summers at Camp Massad. After graduating from JWC, Phil went to the University of Manitoba and earned his dentistry degree and was active with the Alpha Omega fraternity.

Fay-Lynn and Phil met in 1981 and got married at the Rosh Pina Synagogue in 1982. Fay-Lynn pursued her career in private practice as a family lawyer, eventually moving to a family mediation program with the provincial government where she still works. Phil embarked on a successful dental career. Not only was he skilled, but his patients adored him and appreciated his kindness, his gentle manner, and his good humour.

Fay-Lynn and Phil were blessed with triplets in 1989: Matthew, Cara, and Jonathan. Life was busy, rich, loving, joyful, and occasionally exhausting. Fay-Lynn and Phil were very organized, each working four days a week, with Bubbie Esther and Bubbie Toby lending a helping hand. Fortunately, Fay-Lynn reflects, they were easy babies.

Theirs was a home full of energy and love, and true partnership between Fay-Lynn and Phil. Both of them altered their work schedules; both changed diapers; and each supported the other's career goals. They raised their children with a focus on Jewish values, education, and on developing a solid work ethic — principles passed down through the generations.

The Bar/Bat Mitzvah of Matthew, Cara, and Jonathan in 2002 stands out as a special moment for the Katz family. More than 400 guests gathered to celebrate with the family at the Shaarey Zedek Synagogue. Rabbi Alan Green described the kids perfectly — one heart/one intellect/one soul — while Fay-Lynn and Phil beamed with pride.

During the service, the kids spoke of the importance of tzedaka and giving back to the community. Not surprising given the charitable nature of Fay-Lynn and Phil. Fay-Lynn has been a community leader for many years, starting from her time as her BBYO chapter president. She was on the Board and Executive of the Jewish Federation of Winnipeg, and chaired Next Generation Initiatives. Her favourite volunteer endeavour is her continuing service with Partnership2Gether, a program that brings together Winnipeg Jewish high school students with Israeli peers. Phil wasn't one for boards and committees, instead spending his volunteer time at Gray Academy of Jewish Education helping kids in grade one to read Hebrew.

Together, Fay-Lynn and Phil enjoyed a beautiful life. Whether sharing in the joys of their children's accomplishments, or simply taking their beloved dog Jake for a long walk, they celebrated time together. Jake passed away in the spring of 2015 after bringing many years of joy and companionship to Fay-Lynn and Phil.

Tragically, Phil died in a highway accident in 2014, rear-ended by a semi-trailer during a snowfall. It was a deep and profound loss for Fay-Lynn, Matthew, Cara, Jonathan, Esther, Toby, Mayer, Fay-Lynn's brothers and their families, and Phil's many other relatives, friends, and patients. Fay-Lynn was seriously injured in the accident and her rehabilitation continues. She finds strength and inspiration in her strong memories, her love of family and community, the support of dear friends, and in the example set by her mother.

Before Phil died, he and Fay-Lynn made the decision to leave a bequest to the community through their participation in the Endowment Book of Life program. They shared an unwavering love for the Jewish community of Winnipeg and a deep sense of responsibility for ensuring its vibrant future.