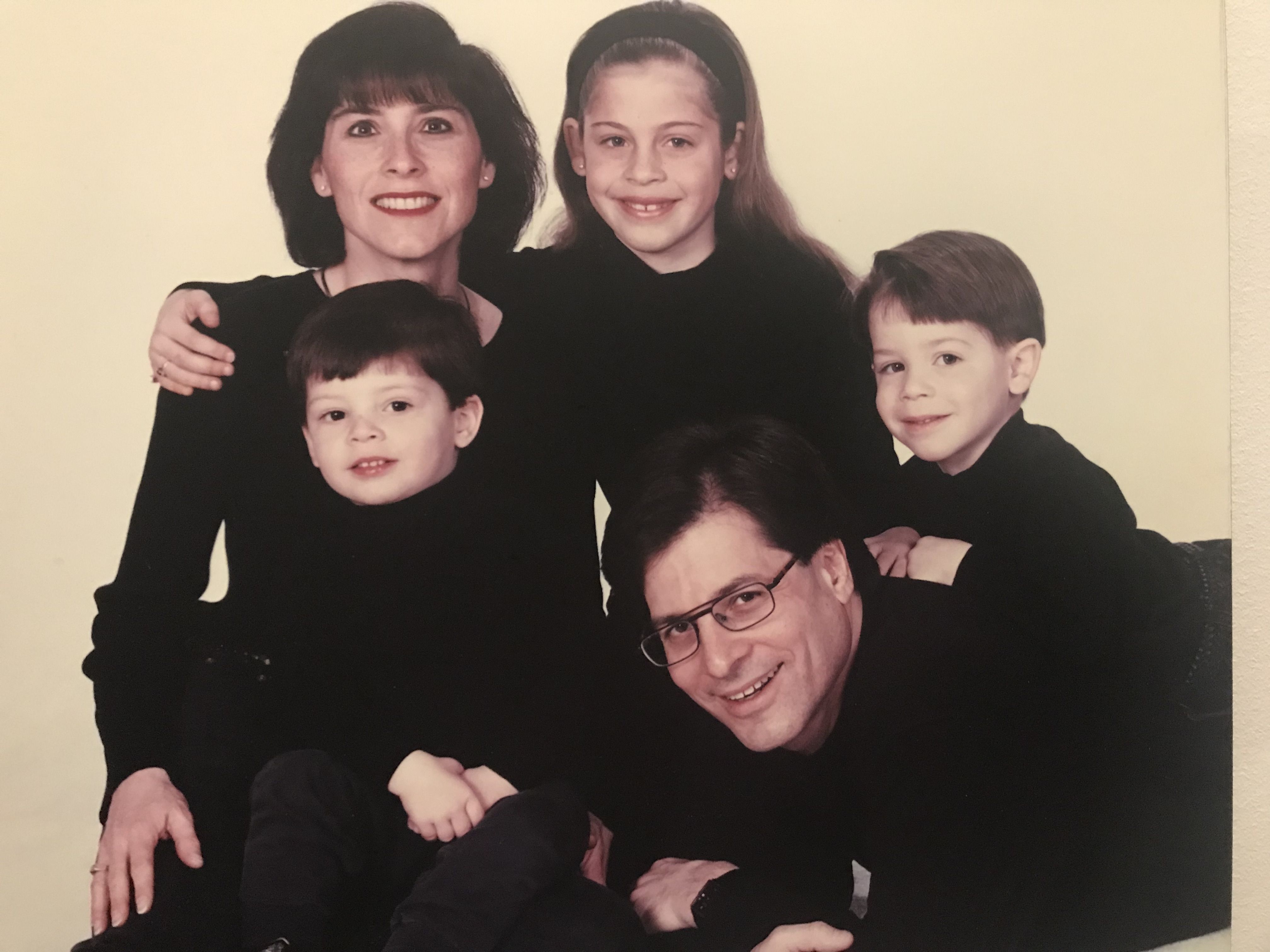 Faren and Keevin with children Kylie, Brayden, and Griffin 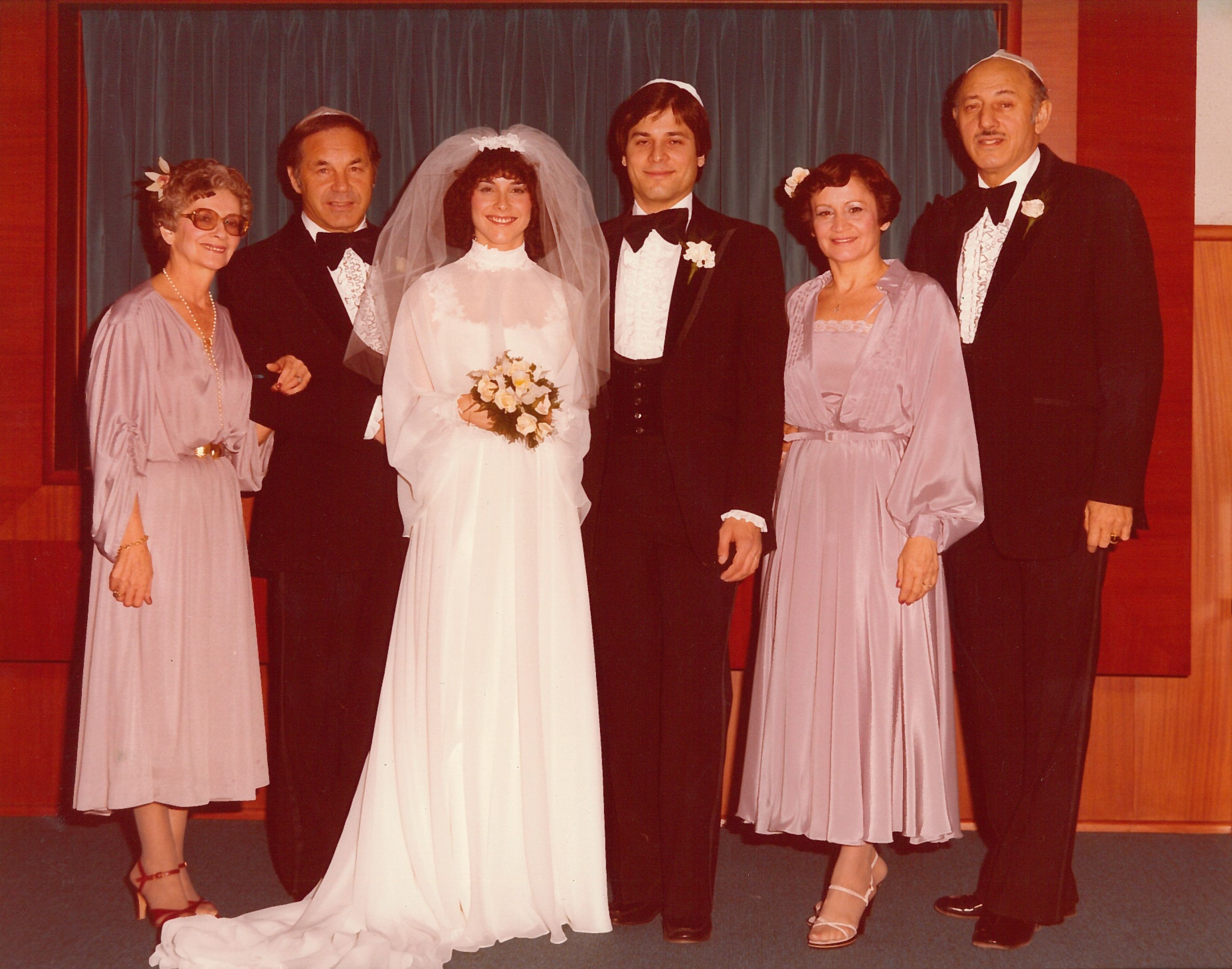 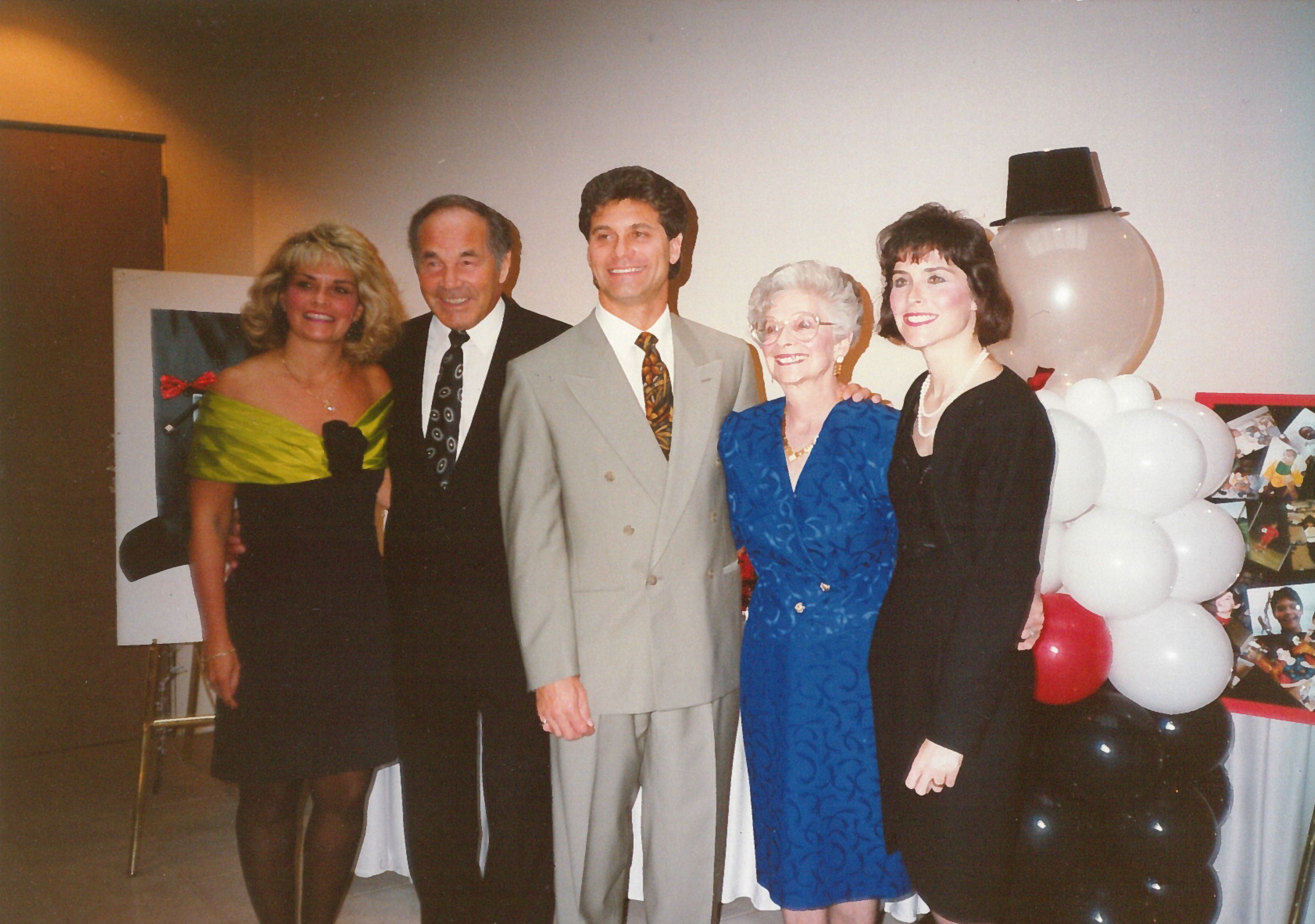 Faren with her parents and siblings 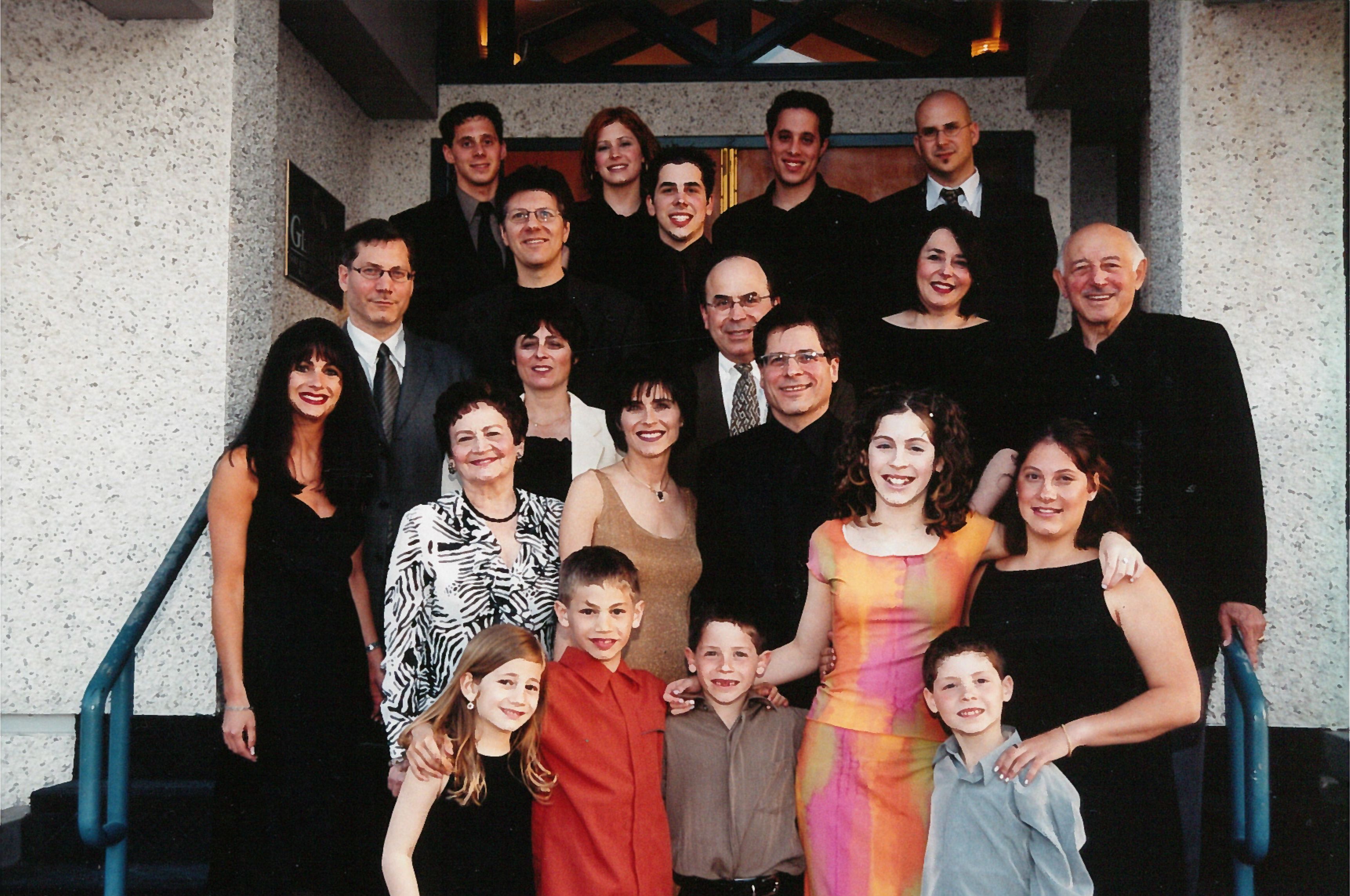 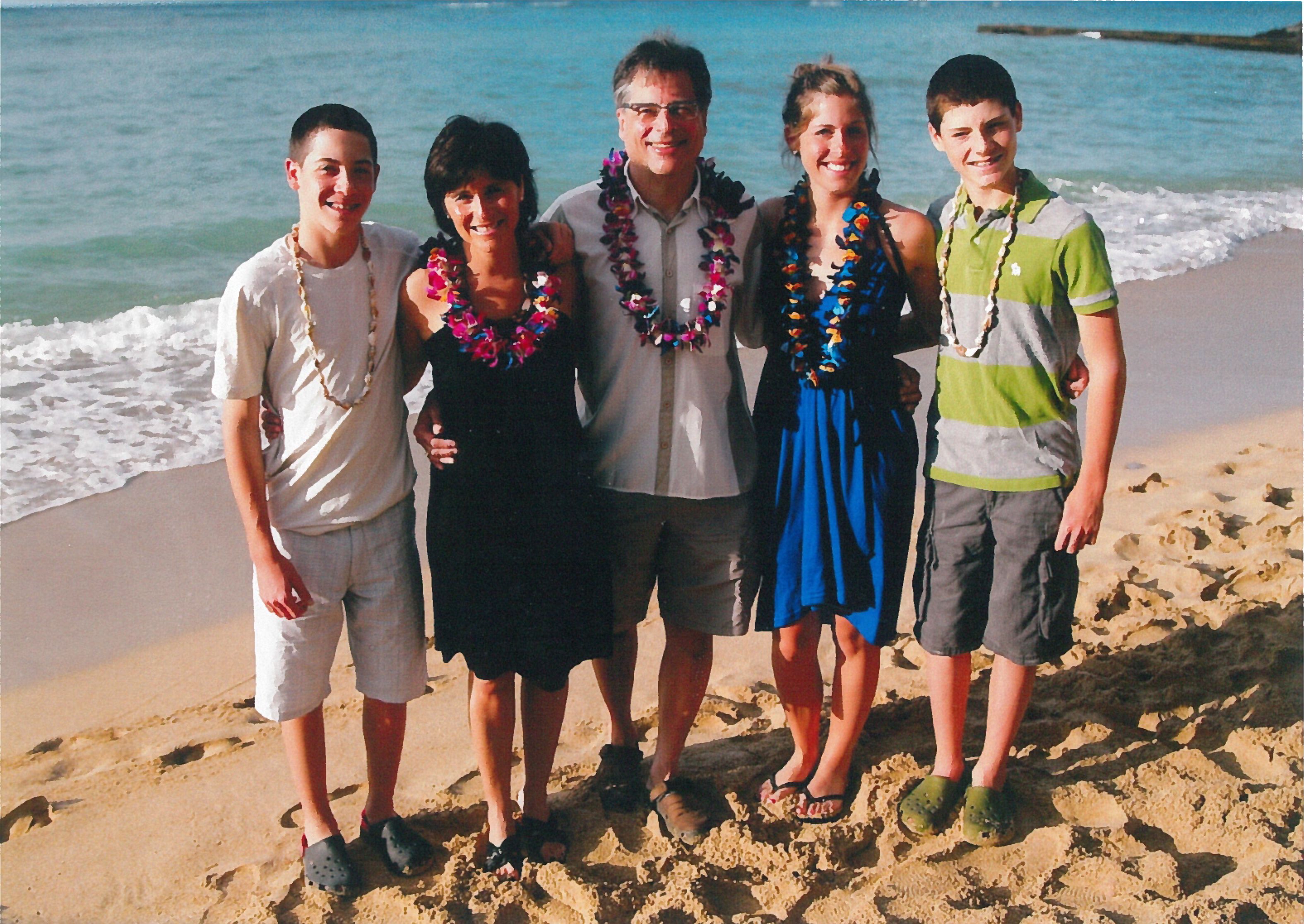 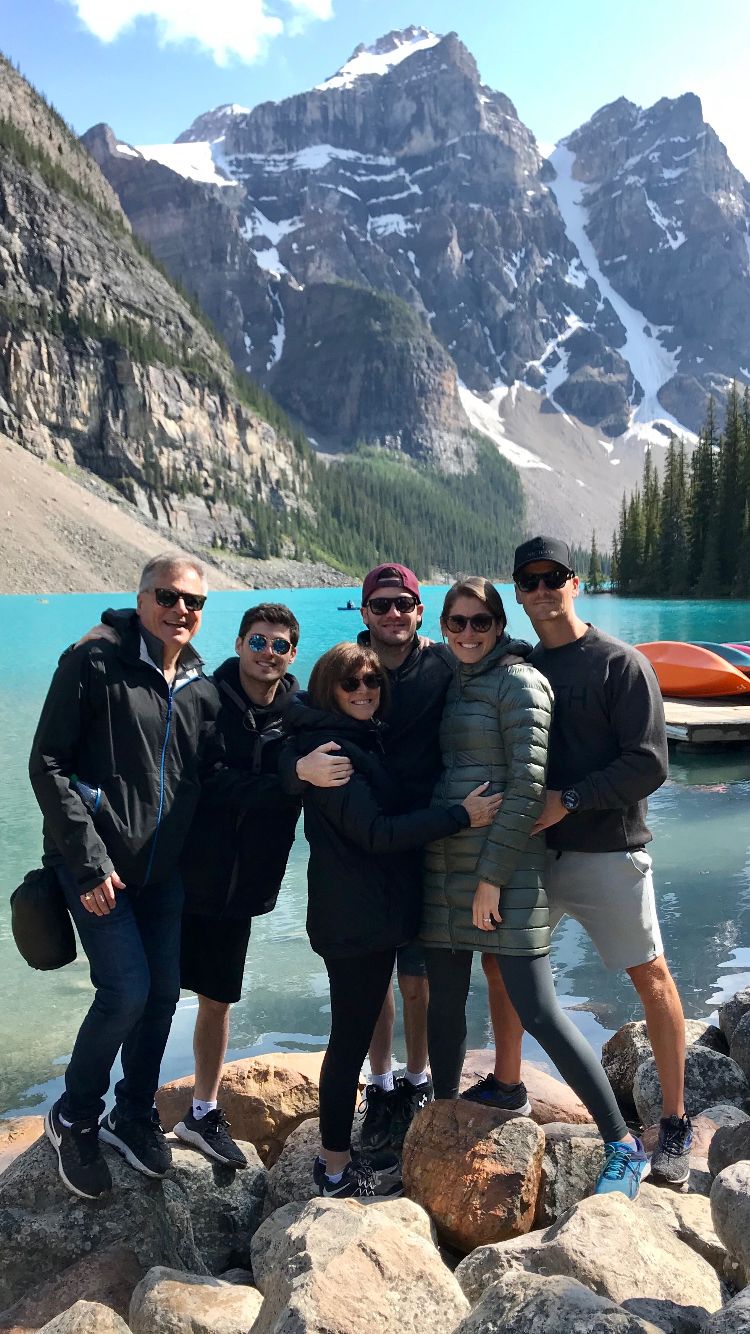 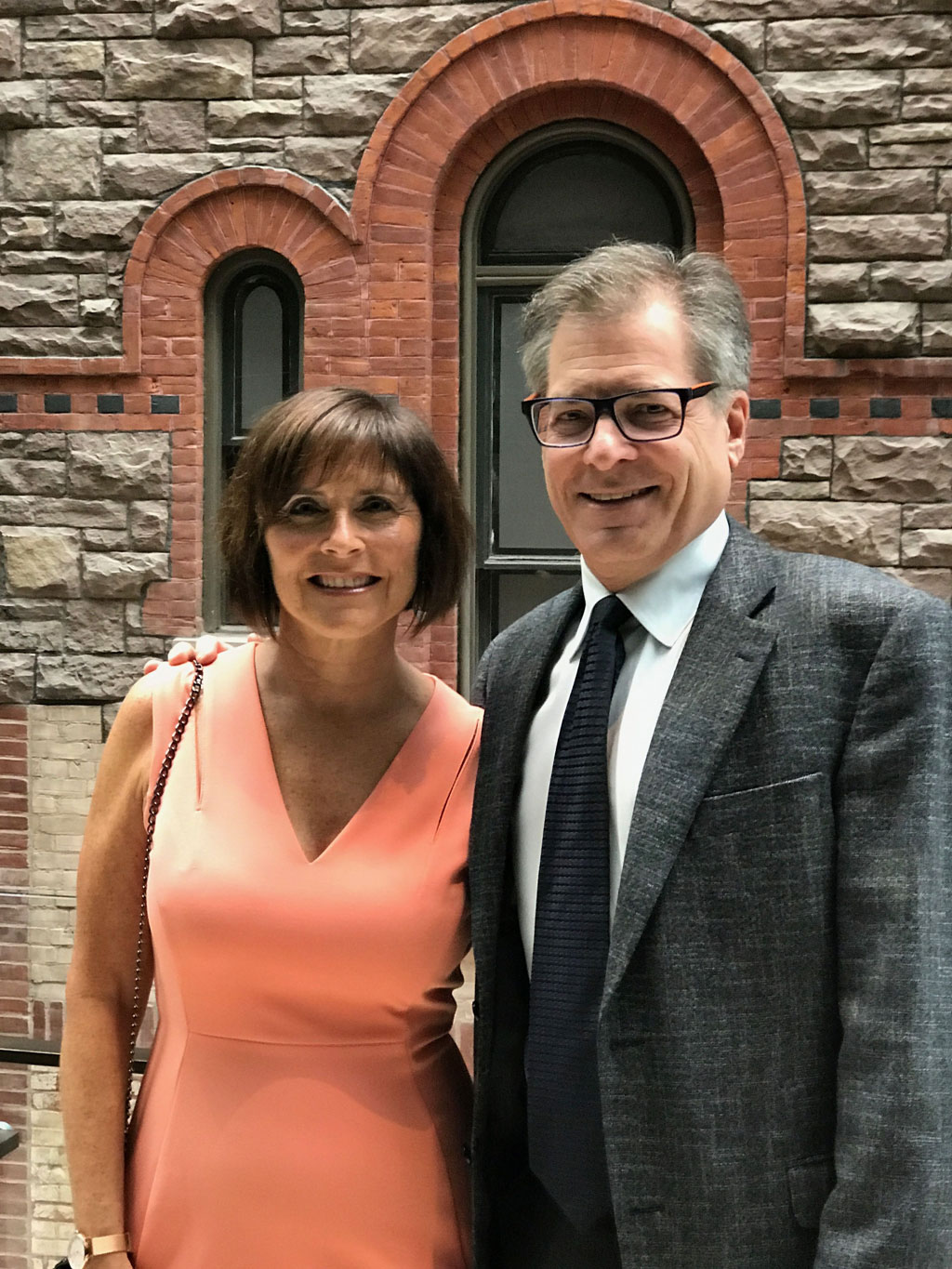 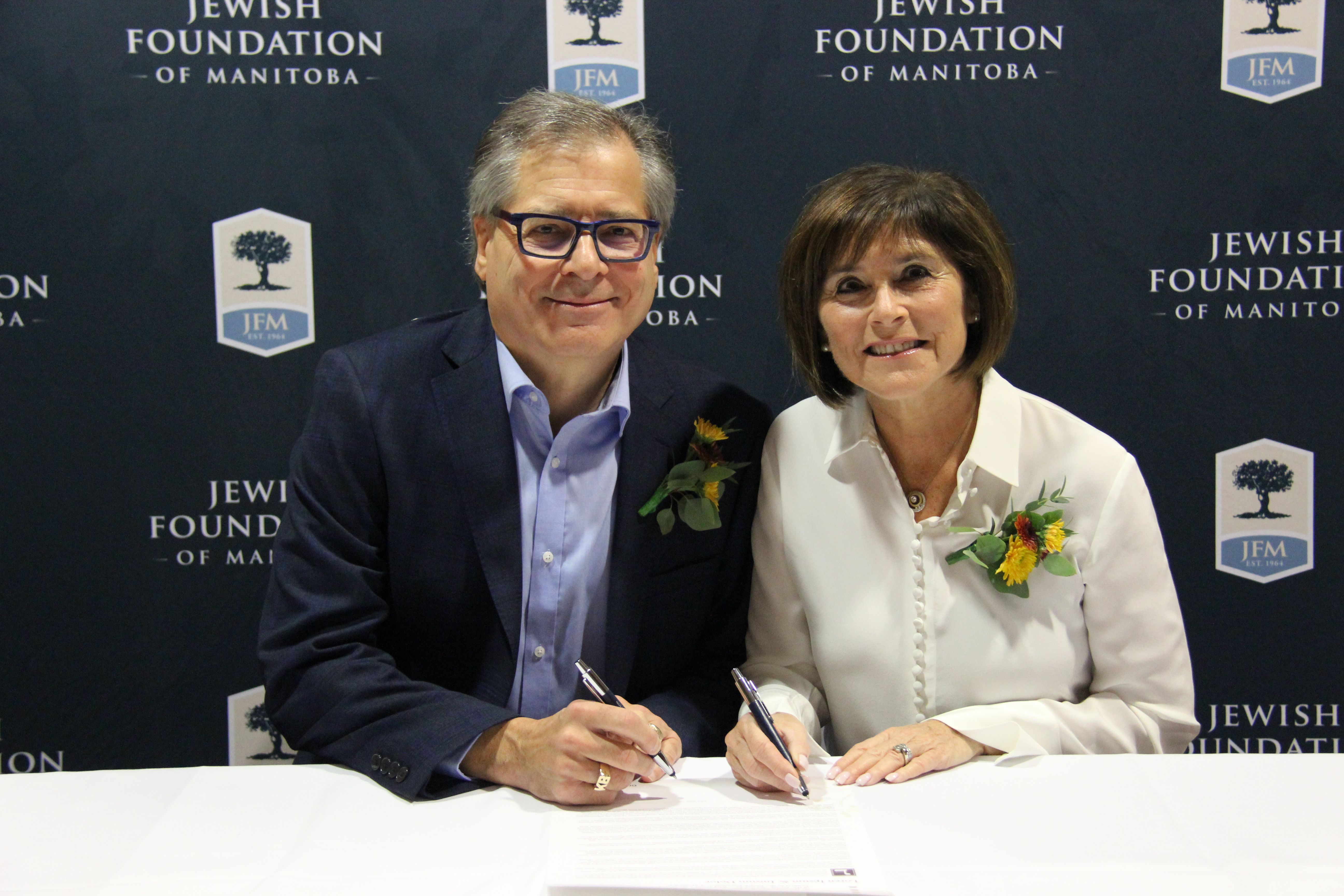 "Faren and Keevin Bernstein embrace a purposeful life together. Their shared values have authored a story that highlights commitment to family, career, Jewish Community and to the greater community of Winnipeg.

As of January 2019, University of Manitoba medical students studying Nephrology have a new resource. The cover of their new textbook features a slide photograph of a kidney tubule but curiously superimposed on the anatomical image is a silhouette image of the Canadian Museum for Human Rights with the Provencher Bridge looming behind it. A map of Manitoba figures prominently alongside the author's name as well as the subtitle, "A Made in Manitoba Undergraduate Resource". The author is Keevin Bernstein and for those who know him, this cover design choice is hardly surprising.

Keevin was born March 7, 1954 to Lou and Clara (Gunn) Bernstein, both of whom had come to Canada as children - Lou with his parents Isaac and Eva Bernstein from Romania, and Clara with her parents Charles and Pearl Gunn from Poland. Lou and Clara had two daughters, Barbara (David Goldenberg) and Roz (Marty Greenfeld), when Keevin's impending arrival motivated them to purchase a bungalow on Burrin Avenue. The Bernstein family was completed with the addition of Charles, "Chutch" (Evelyn) a few years later.

Lou Bernstein excelled in athletics, notably football and was inducted into the Winnipeg High School Football Hall of Fame for his legendary reputation as a star player (playing both full-back and defensive end positions), for the St. John's Tigers. He continued his storied gridiron feats playing for the University of Manitoba Bisons, but his help was needed in his family's grocery store and therefore for several seasons, Lou would enroll at the U of M to play football, and then leave afterwards to work for his father. He turned down a prestigious football scholarship offer from the University of Miami, electing instead to remain in Winnipeg and marry his sweetheart, Clara. In 1948, Lou opened his own grocery store at the corner of Mulvey and Daly, but left the retail business to join London Life Insurance Company in 1956 and enjoyed a long, successful career. Lou and Clara were a real 'team' at home, with division of chores and a child-centered approach to parenthood. Their warm, Jewish home was filled with laughter and song, always open to friends to share their wonderful holiday celebrations.

Keevin attended Talmud Torah until Grade 7, and went on to graduate from West Kildonan Collegiate. As a young teen, he attended the YMHA and was a member of BBYO's Mount Zion chapter of AZA. Though a good athlete, his parents encouraged academics over athletics for Keevin. He attended the University of Manitoba, majoring in science which ultimately led to admission to Medical School there. He met Faren Rosenberg after his second year of medical school while she was home for the summer from her studies at the University of North Dakota. Keevin graduated from Medical School in 1978 and he and Faren were married on December 30 of the same year, during Keevin's internship.

Faren was born, a New Year's baby (January 1, 1956) to Harry and Becky (Stern) Rosenberg who were both first generation Canadians. She has two older siblings, Janis (Arthur Ross) and Ken Rosenberg (Vivian) both of whom left Winnipeg in their 20's to reside in Vancouver. Faren's parents both came from large families with 13 siblings between them which meant she grew up surrounded by the love of family — including more than 30 first cousins! She is named for her maternal grandmother, Fanny (Feiga Etta) Stern who passed away just 2 months before she was born. Among her fondest childhood memories are the Sunday gatherings, first to the home of her maternal grandfather, Joseph Stern, followed by a visit to the home of her paternal grandparents, Esther and Morris Rosenberg. Every Sunday, holiday and family event brought the joy of camaraderie, good food and Jewish traditions replete with a large, diverse cast of aunts, uncles and cousins. The value of family first and always, was instilled in Faren from a very young age.

Faren attended Rosh Pina Day School through Grade 4, followed by Talmud Torah. Growing up on McAdam and Main, she could walk to school every day picking us schoolmates almost every house on her route. Along with her cousins, she had many close friends and participated in many extra-curricular activities including piano and dance lessons, programs at the YMHA and membership in the Bat Sheva chapter of BBYO. Following her graduation from Joseph Wolinsky Collegiate, she attended the University of Winnipeg for a year and then went on to complete her undergraduate studies in Speech Pathology at the University of North Dakota. While Keevin completed his residency in Internal Medicine, Faren worked for the Sevenoaks School Division for three years. They both continued their education when they moved to California —Keevin undertook a Fellowship in Nephrology at the University of California and Faren earned her Master's Degree in Communication Disorders from San Diego State University. They loved life in the states and would probably have stayed, but their education visas dictated that they must leave the US for at least two years, so they found themselves back in their shared hometown of Winnipeg. Neither of them could foresee that this pivotal move would not only allow them to build successful careers, but also to establish a home and embrace a community.

Keevin joined the Section of Nephrology at the Health Sciences Centre in 1984 and within two years, became the HSC Central Dialysis Unit Medical Director. In 1989, he developed the Manitoba Local Centres Dialysis Program which facilitated patients receiving the same level of care in their remote home communities as was provided in urban centres. This program was the first and largest of its kind in Canada, eventually growing to 16 centres including 4 in First Nations communities. In 1998, Keevin developed the Manitoba Renal Program and served as its inaugural director through to 2007. In this role, he led the development of a single, comprehensive program of renal care for the entire province promoting early identification and education initiatives. Keevin's professional passion has for more than 30 years has been medical education. He coordinated and taught undergraduate nephrology at the University of Manitoba, having direct impact on all locally trained physicians. As a highly regarded instructor and mentor, he was a frequent recipient of Manitoba Medical Students Association award for outstanding course and / or teacher. In addition, he has led the development of new overall undergraduate medical education curricula both in 1998 and again in 2013.

Faren enjoyed a satisfying 30 year career as a Speech Pathologist for the former Child Guidance Clinic, eventually working in each of Winnipeg's many school divisions. Her choice of profession provided the bonus of work-free summers along with added flexibility to raise their children and be involved in their many activities. She retired from the River East Transcona School Division in 2011 to care for her ailing parents. Their daughter, Kylie, born 1988, is currently a paediatrician in Edmonton. She married Tyler Benson on January 5, 2019 on a beautiful winter day in Winnipeg, proudly showing off their hometown to their out-of-town guests. Their son, Brayden, born in 1992 obtained his Commerce Degree from the Asper School of Business at the University of Manitoba and holds the position of COO at a tech start-up company. Their son Griffin, born in 1994, also earned a Bachelor of Commerce degree from the University of Manitoba and is presently in the CPA program at Deloitte in Winnipeg.

Faren and Keevin are proud of their children; the way they live their lives and the adults they have become. All three are graduates of Gray Academy, were BB campers and counsellors, have each visited Israel three times and most importantly feel connected to their Jewish community, traditions and heritage. Their sons' passions for both playing and following sports have been focal points in their lives (as evidenced by the imposing basketball court in their back yard!) Kylie, Brayden and Griffin have valued their close connections with grandparents, aunts, uncles and cousins; while their many friends are welcomed with open arms into the Bernstein home. Summer weekends spent in Gimli and family travels together have enhanced their strong family bond and created lifelong memories.

The Bernsteins consider the Asper Jewish Community Campus as their "home away from home". They are indebted to those community leaders and supporters who had the vison and resources to build the Campus to house the Gray Academy, the Rady JCC, and many Jewish community organizations. Faren and Keevin are active patrons of the impressive cultural, athletic and educational programming that is made available to all Winnipeggers at the Asper Campus. They are proud and appreciative of what our community has contributed to quality of life in Winnipeg. Gratitude and a desire to ensure the continuity and preservation of this strong, vibrant community compel them to give back. They have been involved as volunteers and fundraisers for a variety of organizations in the Jewish as well as general communities. They are steadfast supporters of the Winnipeg Jets, the Winnipeg Blue Bombers and love to partake in many of the cultural opportunities — theatre, music, film, festivals — that Manitoba has to offer.

Keevin's and Faren's connections to the local Jewish community inspire them to seek out and explore other Jewish communities in their travels. Wherever they go, they act as ambassadors for not only Winnipeg's Jewish Community, but for the city and province in general. People frequently comment incredulously, "You lived in San Diego and moved back to Winnipeg?" Keevin's response is always the same, "There's more to life than weather".

Ralph Waldo Emerson postulated, "The purpose of life is not only to be happy. It is to be useful, to be honorable, to be compassionate, and to have it make some difference that you have lived and lived well." Though there remain more chapters to be written for Faren and Keevin, their story thus far illustrates their commitment to such noble guiding principles.