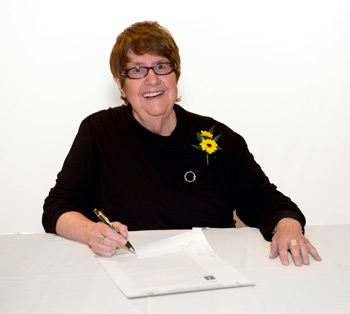 Faigie Greaves signs her story for the Endowment Book of Life

While I have many interests outside of the Jewish community, and friends of many different backgrounds, it's impossible to know me without knowing how important my Jewish identity is to me. It's a pride that I inherited from my parents, Aaron and Monica Dozar (née Oretzki).

My father was born in Nikolaev, Russia, in 1911 and came to Winnipeg when he was two years old. His father, Chaim, had arrived in Canada two years earlier and paved the way for his wife, Fruma, and their children to join him. Chaim was a furrier and tailor and worked long hours to support the family.

Monica was born in Winnipeg in 1919 to Dora and H.I. Oretzki. The family owned and operated the iconic Oretzki's Department Store on Selkirk Avenue. They lived on the second floor of the store when my mother was born.

My parents met when my dad started to work in Oretzki's shoe department. They married in 1939 and enjoyed a beautiful marriage. They communicated lovingly with each other and whenever they were together, there was always a kiss.

My mother was a lovely and smart woman who attended university, unlike many of the women of her time. She used to read voraciously, borrowing books from the Eaton's lending library. She was active in Hadassah and enjoyed playing canasta and bridge. She was a quiet woman who adored her husband and children. She died in 1975 after suffering a stroke a few years earlier.

My father was a gentle, well-liked man. To this day, people smile widely when they learn that I am Aaron Dozar's daughter. He had a wonderful reputation in the city — not surprising given that he used to believe "the most important thing you own is your name." After my mother died, my father married Lily Mozersky, a childhood friend. They also enjoyed a wonderful marriage. My father was a handsome man who, after working at Oretzki's, owned and operated Sterling Shoes and Paramount Shoes. He passed away in 1988.

I was born in 1941, the first of three daughters. Penny (married to Marvin Kohn) and their children Karen and Sammy and Marsha followed . My best childhood memories were when we were together as a family on trips to Detroit Lakes or when we rented a cabin on Hazel Avenue in Winnipeg Beach in the summers. My dad commuted back and forth to the beach and I have strong memories of being so happy and thrilled when he would arrive. To this day, my sisters and I are very close. We learned from our parents to embrace and enjoy the power of family, both immediate and extended.

I grew up on Glenwood Crescent in East Kildonan, just over the Redwood Bridge, later moving to Queenston in River Heights. I attended Glenelm School, Machray School, and Kelvin. I also attended the Hebrew school at Rosh Pina where I appeared in plays and musicals with encouragement from Rabbi Arthur Chiel. I had one of the first Bat Mitzvahs ever to be held at Rosh Pina. In my youth, I enjoyed skating, reading, and music. In fact, music has always been very important to me. I took singing lessons from the late Sara Udow, and enjoyed listening to the opera with her. I also studied piano as a child, appeared in operettas in high school, and sang in the Temple Shalom choir for many years as an adult. For me, music — especially opera and Jewish music — is my gateway to spirituality.

After high school, I studied nursing and graduated in 1964 from Winnipeg General Hospital where I continued to work. It was a perfect fit for me as I love working with people and I get a great feeling of satisfaction when I can help someone. Having my degree helped me feel strong and confident; my career was very important to me. Two colleagues and I decided to pursue our careers at Mount Sinai Hospital in Toronto. By then, I had met Bill Greaves, who also relocated to Toronto. Bill converted to Judaism and we were married in 1966. Our two sons, David and Daniel, were born in Toronto. We moved to Winnipeg in 1974 and lived on Borebank, Renfrew Bay, and Oxford and I took a job with Home Care. Bill and I divorced after about 20 years of marriage. He remarried and today, Bill, his wife Elsie, and I are good friends.

My life today is rich and full. I love spending time with friends — including my nursing school classmates — and I am passionate about my sons and their families. David lives in Winnipeg, works with the Jewish Foundation of Manitoba, and is married to Tracy Kasner Greaves, who is the Cantor at Congregation Etz Chayim. David gets great pleasure from working in the Jewish community. Danny lives in Toronto and is married to Lisa Black. He is the lead singer of The Watchmen, a popular Canadian rock group, and is involved in a number of businesses in Toronto. I am so proud of my sons for their accomplishments, and so very happy that they are such great friends to each other. I am blessed with two wonderful daughters-in-law and four beautiful grandchildren: Tennessee, Nesya, Max, and Aaron.

I try to spend my time with purpose and in ways that are meaningful to me. I love going to synagogue, usually Etz Chayim, and have spent a great deal of time volunteering over the years with the Sarah Sommer Chai Folk Ensemble, the Village Clinic, and Heartsong, an annual retreat for people living with HIV/AIDS offered at St. Benedict's Retreat Centre. I aim to be compassionate, fair, and to show empathy as we all have challenges in life. These values, which I learned from my parents, have served as an excellent foundation for my professional and volunteer pursuits.

My participation in the Endowment Book of Life is one way in which I can share these values with my grandchildren, and a beautiful way to support my community.