Faige and Sam (Shoilik) Malmed, as told by their grandchildren 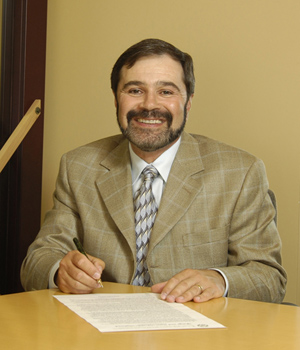 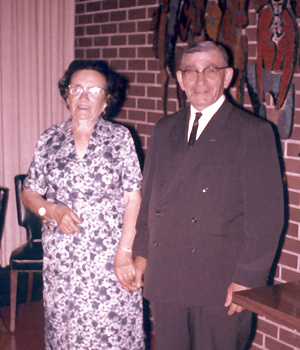 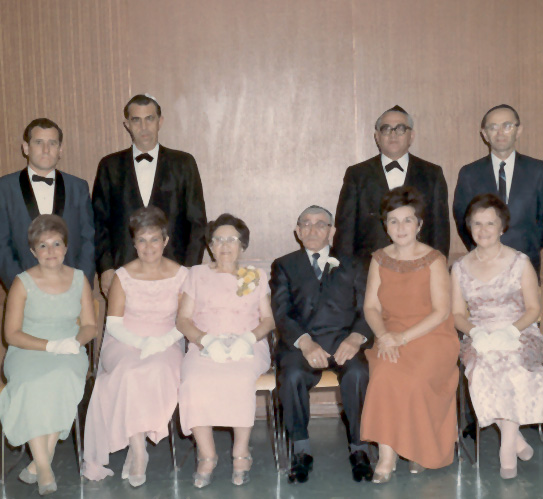 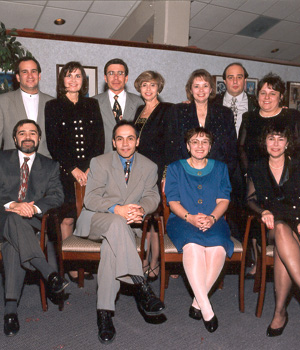 The 11 grandchildren of Faige and Sam Malmed

To paraphrase a saying, beside every extraordinary man is an extraordinary woman. This sums up the life of Faige and Sam Malmed, a wife and husband whose particular impact on the Jewish community of Winnipeg will probably not be duplicated. You may ask, "What building did they commission?" or "How large were their donations?", but such questions fail to recognize the contribution they made to our community. Their legacy is that they led a life that embraced and valued others above all.

In 1926 Sam left Faige in Poland with their daughters Rose, Ann and Lily (a fourth, Beverley, was born in Winnipeg) and came to Canada to start a new life. Although he was slated to go to a farm in Saskatchewan, when the train stopped in Winnipeg on the eve of Pesach, Sam did what every other religious young man would do - he got off the train, found a synagogue and met some Jewish people. Following these instincts he landed his first job in the scrap metal business and began saving money to bring his family to Canada. Brother-in-law and cousins came first, because Sam knew that once his immediate family arrived there would be no extra money for others. Courageously, Faige accepted this decision and waited patiently in Poland until August, 1929, when Sam sent for her and their daughters.

Sam and Faige had very little in Poland. In Winnipeg, determined to make a better life for them all, Sam moved from the scrap business to peddling fruit and vegetables from a cart. In 1933, Sam and Faige rented a small grocery store. To supplement their income, Sam also worked as a newsie (selling candy, cigarettes and newspapers) on the Winnipeg to Saskatoon train run. In 1950 they built their own grocery store. Their life in Winnipeg was a typical immigrant experience — hard work, family and synagogue.

In the early 1930s, Sam became involved with his synagogue's 'sick members visiting' committee. When visiting the hospital, he met a Jewish patient from outside Winnipeg. Speaking Yiddish only, this man told Sam that he could not eat because the hospital did not provide kosher for Pesach food. From this encounter, Sam saw a need, and began bringing matza to all hospitals and nursing homes until these institutions took on this responsibility.

In 1934 Sam became chairman of his synagogue's sick visiting committee. In the late 1930's, fate intervened to turn this volunteer position into a life long calling. Lily, his third daughter, was hospitalized in Rochester, Minnesota. While there, Sam slept in the waiting room to save money. Walking the hospital hallways, he realized that people spent days at a time with no visitors. He made a promise to G-d that if Lily got better, he would never stop visiting people in the hospital. Lily recovered and for nearly 60 years, twice a day, seven days a week, Sam Malmed visited Jewish patients in Winnipeg hospitals and nursing homes. He did this on his own initiative, not with the support of a committee or an organization, and without any expectation of financial compensation. He had no car allowance (he never learned to drive) - he walked or rode the bus. He brought words of encouragement, candy, gum, newspapers and cigarettes, (when they were still socially acceptable). Not restricting himself to regular visiting hours or limiting himself to those patients he knew, Sam visited all the Jewish people identified by the hospitals and nursing homes. If you were hospitalized or a shut-in and were Jewish, you could count on a visit from Sam Malmed.

One example of his devotion, which has become a family legend, occurred during the blizzard of March 4, 1966. Sam walked from the St. Boniface Hospital to his West Kildonan home, bus pass in hand, but even the buses weren't running that day.

The Malmed family home, first on Stella, then on Aikins and finally on Seven Oaks was a meeting and eating place, welcoming at all hours, family and Jews in need. Sam's ability to bring people to his home was made possible by Faige's generosity of spirit and willingness to welcome and feed those less fortunate.

Sam's determination and devotion and Faige's loving support, kindness and hard work enabled them to set the standard for "bikkur cholim"... visiting the sick. In his later years, after the passing of his wife, Sam's contributions were recognized. He was the first recipient of the Dr. Percy Barsky Humanitarian Award, and was recognized by many community hospitals. Today, stories about Faige and Sam are joyously remembered and retold by their 11 grandchildren.