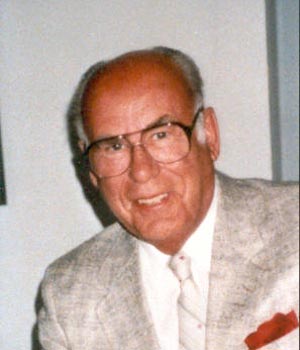 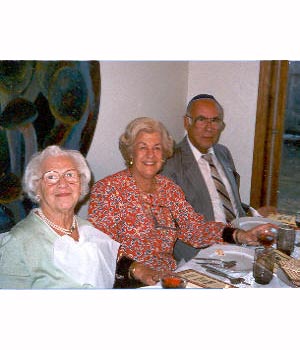 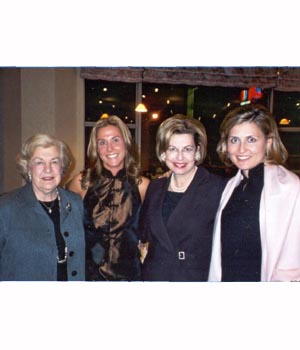 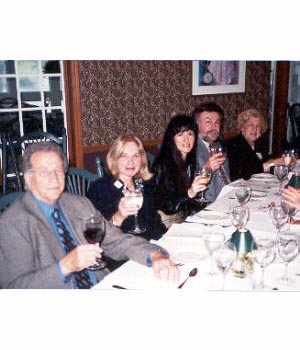 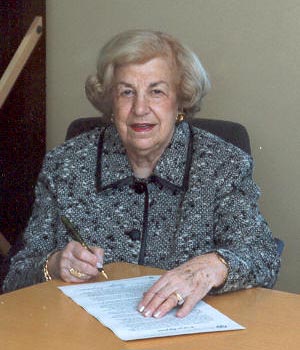 Evelyn Rayman signs her story for the Endowment Book of Life

When I turned seventy I was reflecting on my life and came to the realization that there was a great deal of love in my life. It was at that stage of my life that I recognized how fortunate I have been through-out my life and today I feel proud that I am able to publicly acknowledge this fact and that I am able to give something back to this community that has provided me with so much affection.

I was the eldest child of two (Eddie is my brother) born to Max and Bessie (Klasser) Shell. The love that I experienced as a child was not the kind that came from a great deal of material items. My father, who took sick in his 20's, operated a number of country stores prior to finally settling in Winnipeg. Born in Kiev and a child of three generations of rabbis, my father was very learned in traditional practices. His ailment cut his life short and he passed away while he was a resident of the Sharon Home. My mother, from Odessa, met and overcame the challenges of life in a new country and an ailing husband. Rather than hiding away from the necessity to integrate into the mainstream of society, my mother learned how to speak English, how to deal with the school system and how to introduce me to the culture of Winnipeg, theatre and ballet. Through my mother's determination and the assistance of my extended family -aunts, uncles and grandparents on both sides, I now realize how close and concerned a family I had.

Growing up on Pritchard Avenue I attended the regular north-end schools eventually graduating from St. John's. My school memories are all positive, as I loved both the educational and social side of school. It was during my post high school social life that I met, and within a year began dating my future husband, Ben Rayman.

Returning to Winnipeg after the war Ben, along with his brothers-in-law, Dave Pollock and Morris Adleman, began to acquire and operate a string of restaurants. The Mandalay, South Seas, Mardi Gras and Rickshaw are a few of the better-known restaurants they operated. Eventually Ben sold the restaurants and entered the nursing home industry (Heritage Lodge).

While Ben went out to work I raised our two children, Karla and Marty. Today Karla along with her husband Eugene live in Vancouver where Karla is a community fundraiser and Eugene is an oral surgeon. I am most proud of my two granddaughters Lana and Kerri, both married and who work together as stock brokers while raising their children - my three great- grandchildren, Benjamin, Chloe and Maxwell. In addition they are very active in their community and I feel doubly blessed that I am able to contribute to my Winnipeg community to foster a strong community for our young community members. My son Marty, who is involved with another nursing home, is married to Lori Lachter and I am fortunate that they decided to remain in Winnipeg.

I have a very strong and close relationship with my brother Eddie, his wife Rose and their son Alan and daughter and son-in-law Marla and Avie Kaplan and their children Andrew and Emily. They have all been very much a part of my life before and after my marriage.

My marriage to Ben was filled with love and respect for each other. We started in West Kildonan, moved to Queenston Street and then to a condominium as our lifestyle took us away from Winnipeg each winter. It was at my home in Palm Springs that I rediscovered my interest in the arts. It was there that I began a twenty-year and counting involvement with sculpting. Taking endless classes I learned to appreciate the creation of various artworks. Both my Winnipeg and Palm Springs residences are filled with my efforts. This love of sculpture has provided me with countless pleasures especially after Ben's death.

Today as I reflect upon my life and how I want to be remembered, I hope that Ben and I are seen as people who gave back to a community that has been good to us and to Jews in general. Family closeness and responsibilities are traits that I feel that I have demonstrated in all my life and I hope that I will be remembered as a person who "paid back" for all that I received.