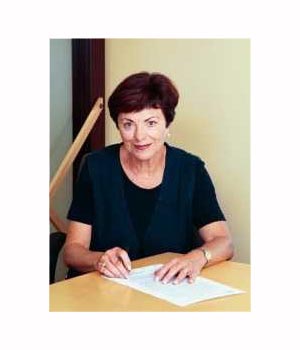 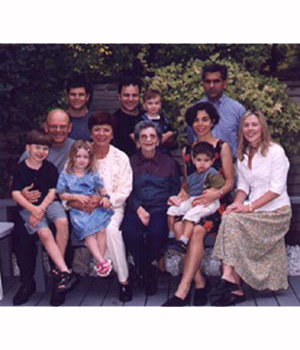 Larry and Evelyn with their children and grandchildren, and Larry's mother Ida Hecht

My father, Abraham Malian (born Trachtenberg), was born in Bessarabia in 1896 and immigrated to Winnipeg to begin a new life. He worked as a peddlar and quickly established himself sufficiently to bring his fiancée, Sarah Widergorn, to join him. My mother was born in Bessarabia in 1906. She arrived in Winnipeg via Halifax in 1926, and they were married shortly thereafter.

My parents worked very hard in order to bring her family over and she was quickly joined by her parents and 5 siblings. She was finally blessed with a child, my sister Ethel (Gordon in 1935. I was born March 1, 1941and my sister Seema (Ariel) arrived in 1945. My first memories are of large family gatherings in our tiny home on Boyd Avenue and of wonderful picnics in the park with all of my cousins. I learned about Yiddishkeit, tzedakah, and unconditional love for family, spirituality, our traditions, and respect for all people from my parents.

I lived on Boyd, Inkster and Smithfield and graduated from I.L. Peretz Shule, Luxton, and St. John's Tech. From a young age I loved to sing and I was in Cantor Brownstone's choir. I studied piano and sang in school choirs, variety shows and Glee Club at the U of M. I graduated with a Bachelor of Arts, Bronze medallion in French Literature.

On May 28, 1961 I married Larry Hecht and we began to raise our family of three children, Benji, Jody and Paul. Larry began to learn about the family fur business and I was a stay at home mom. My days were filled with children, volunteer work, extended family and friends. I was fortunate to be able to pursue my love of the stage, professional and amateur, through performances at Rainbow Stage, Manitoba Theatre Centre and countless synagogue and community productions. I also performed in many Hollow Mug Productions over the years.

From my mother I learned the importance of working for the community and as a young mother I became active in CJA Young Leadership, Hadassah and Ramah School. In 1975 I co-chaired the Town Hall Lecture Series and was honoured to receive the Max Nathanson Young Leadership Award in 1978. I served on the Board of NCJW and was actively involved in the Opportunity Store. I was an activist for egalitarianism on the Board of the Shaarey Zedek Synagogue for many years and proud to serve as its first female president. In the general community, I served as Chair of the Manitoba Community Services Council, and on committees of the United Way. I hosted the "Jewish Connection" cable TV show for many years.

In 1990, my love of community and extensive experience as a volunteer led to my employment as Director of Community Relations for the Winnipeg Jewish Community Council, a position I still hold. I have found it very rewarding to be at the pulse of the community, particularly during the building of the Campus. I have especially enjoyed working with immigrants and have become very aware of the uniqueness of our community. Others recognize in us a special warmth and connection, and are quick to point out our remarkable achievements. We have a great deal to be thankful for.

Larry and I are blessed to have our grandchildren Jeremy, Alexa and Brendan (with their parents Benji and Sara (Fleisher), and Zachary (whose parents are Jody and Hardev Bains) living in Winnipeg. Our son Paul lives in Toronto.

Larry and I have tried to carry on the tradition of chesed, tzedakah and derech eretz that our parents modeled. We hope our children will, in their own way, do the same.