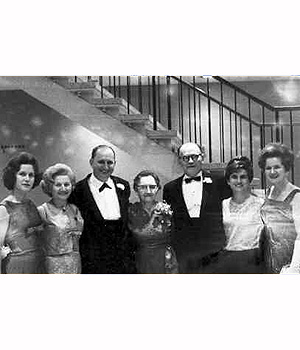 The Sarner siblings with their parents, Sarah and Benjamin Sarner 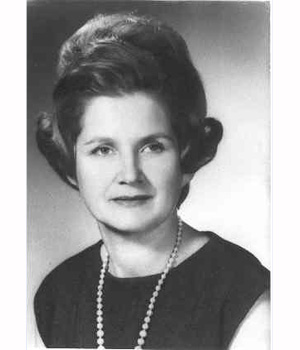 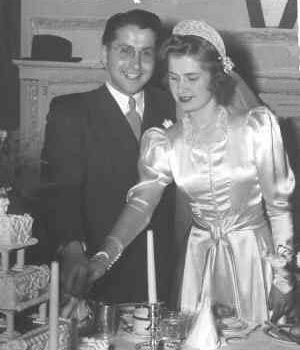 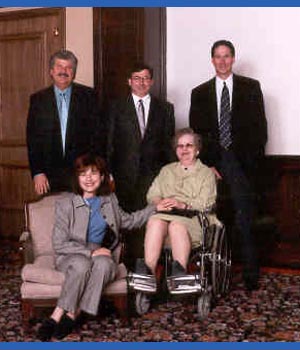 Evelyn with her children 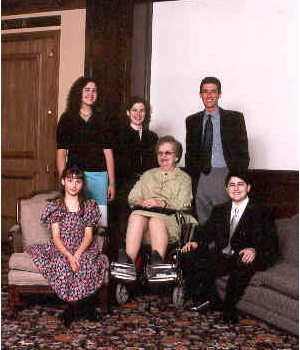 Evelyn surrounded by her grandchildren

Evelyn Bernstein (Sarner) was born on March 6, 1922 to Sarah and Benjamin Sarner. She spent her youth living in the North End of Winnipeg on Salter Street and attended Machray and St. John's High schools.

Her father was the first Executive Director of the Sharon Home and took over the position in 1922 after he came from Russia. He maintained his position until 1952 and spent many years raising money all over Western Canada, through great hardship to support the growth of the Sharon Home. Her mother, Sarah had an open door policy in her home to all the family and friends that came from Russia and needed a place to live. Even though there were six children to feed and very little money, there were always cousins and newcomers at the dinner table. Babie's cooking had such a family impact that two of her grandchildren reproduced her recipes in a cookbook that was formally presented on Evelyn's 75th birthday. In addition to recipes the book provided a biography on the family members.

Evelyn had five brothers and sisters, Dorothy (Manace), Sam, Wilfred, Rona (Vankay) and Berte (Rubin). Berte, who lives in Toronto, is the only remaining sibling.

She married David Bernstein in 1944 and raised four children, Joanne (Sheps), Alan, Richard and Brian. Her pride and legacy are her five grandchildren, Laura and David Sheps, Lisa and Michael Bernstein and Sarah Bernstein.

She spent twenty-five years working with her husband David in the jewelry business, Graham Jewellers, and did so until his death in 1970. In the years following the death of her husband, she was a hard working volunteer and was responsible for signing many life members to the National Council of Jewish Women. Evelyn also worked in real estate and spent her leisure time at the Forum Art Studio creating beautiful sculptures. Her children have her pieces and treasure them.

She feels her legacy is her children and grandchildren. Education and hard work were integral to her belief system and she is very proud of her family and their achievements. Although she struggled through many years of ill health, she was always determined to keep going and continued to value and treasure each day.