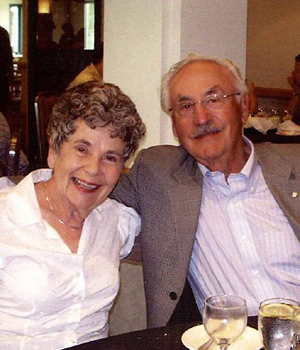 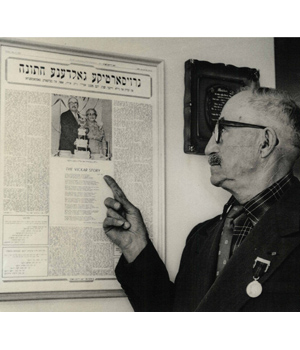 Eve (centre) with her parents Arthur and Irene Weinberger 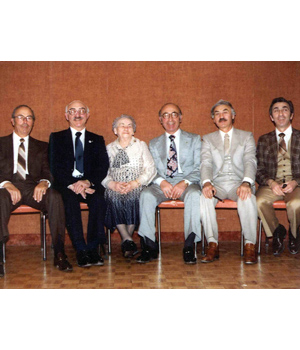 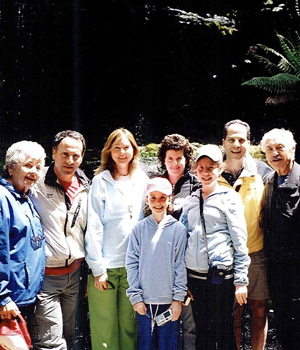 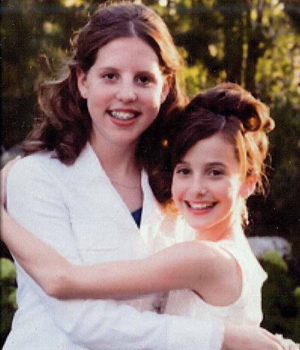 There is a Hebrew proverb that says, "The kind man feeds his beast before sitting down to dinner." Eve and Harry Vickar are devoted animal lovers. Sascha, their Siamese cat, and many pets before, have experienced the kindness of the Vickars and it was a delight to meet with them recently and to hear their story...

Sam Vickar left Lithuania as a young man and immigrated to South Africa with one of his two brothers. When the Canadian government offered land for sale, he applied and in 1906 arrived in Star City, Saskatchewan. With 160 acres of bush, life as a mixed farmer was difficult. Gradually, he developed the land and together with his siblings and their families, the community of Edenbridge was born.

Harry's mother, Gertrude Gelman, came to Winnipeg from Lithuania as a young girl. She worked for T. Eaton Co. as a seamstress when she met and married Sam. The Vickars had five sons: Edwardz"l Norman, Morrisz"l, Harry and Joe z"l.

Harry was born in Star City on December 27, 1923. He attended school in Edenbridge, Brooksby, and Melfort. His love for animals gave him the desire to be a veterinarian and he attended university for two years, but these were the war years and his help was needed on the farm. He continued to farm and also began working in his brothers' car dealership, Vickar Motors, in Melfort.

In 1950, Harry travelled by train to Oshawa, Ontario to pick up a car from General Motors. While there, he visited Julius and Fanny Loeffler who had retired to Oshawa from Edenbridge in order to be nearer to cousins there, the Weinbergers. Harry was introduced to daughter Eve and over the next three years he courted her long distance. They were married on December 6, 1953, the first wedding in the Oshawa Synagogue.

Eve was born on November 14, 1928 in Vienna, Austria, the only child of Arthur and Irene Weinberger. Arthur studied architecture, fought in World War I achieving the rank of Lieutenant, and then partnered with his brother Max in the "Albatross Soda Water & Mustard" factory. Irene was born on a farm close to the Czechoslovakian border. She loved needlework, cooking and baking. After Kristallnacht, November 10, 1938, Arthur managed to get his family to Yorkshire, England in July 1939, six weeks before Germany invaded Poland, largely sealing the fate of remaining Jews in Austria. Arthur and Irene worked as domestics in exchange for their life saving visas. In July 1940 the family travelled by boat to Canada and settled on a small farm near Orono, Ontario. The harsh conditions with no electricity and no running water were a far cry from their former life.

Eve attended a little country school and endured teasing about her clothes and her accent. She also now did farm chores and enjoyed the company of her collie, Buster. On her 16th birthday, the family moved to Oshawa and soon bought a large house with rooms to rent. Eve attended OCVI Collegiate for four happy years. She loved languages, public speaking, and debating. After high school she went to work in the office of General Motors and worked there for five years until her marriage.

After their marriage, the Vickars moved into a lovely new bungalow in Melfort. But only a few weeks later, they had the opportunity to purchase a farm of their own and moved to Naisberry, six miles away. Eve was once again a country girl. They moved back to Melfort in time for the birth of their first son, Lionel Kerrin "Kerry" in January, 1957. Their second son, Eric Lorne, was born in April, 1959. Both Harry and Eve, and their boys, enjoyed the camaraderie and connection of the large extended Vickar family and all their wonderful neighbours and friends.

In 1963, Harry bought into the dealership and after six years he stopped farming altogether and devoted his time to the business. In 1974, Vickar Motors in Melfort was sold and the Vickars moved to Winnipeg where their sons were to attend university. In Winnipeg, Harry worked for his brother Ed for a time. Later, he and his cousin Ike Vickar were partners in both Pembina Dodge Chrysler and Nairn Nissan, which Harry established in 1980. Nairn Nissan was sold in 1999.

Both Harry and Eve have always been very active in the community. Among other involvements, Harry was President of the Melfort Agricultural Society and active with the local curling club and Kinsmen Club. He was President of the Carrot River Valley Boy Scout Division and belonged to B'nai Brith. Eve belonged to Kinettes, worked for many years with the Melfort Kinsmen School Band Committee, with Overture Concerts and IODE. She belonged to Hadassah, NCJW and for many years has served on the Board of the Women's Committee of the Winnipeg Symphony Orchestra and volunteered with the Shaarey Zedek Synagogue.

The Vickars are deservedly proud of their family. Kerry is a lawyer by training and has achieved success in business. He is married to Simone Dean and they reside in Jupiter, Florida. Eric is a Child and Adolescent Psychiatrist in Winnipeg. He and his wife, Susan (Kalef) have given the Vickars two beautiful granddaughters, Michaela (1990) and Chloe (1993).

It is for future generations of their family, and for their community, that they are making this legacy commitment to the Jewish Foundation of Manitoba.