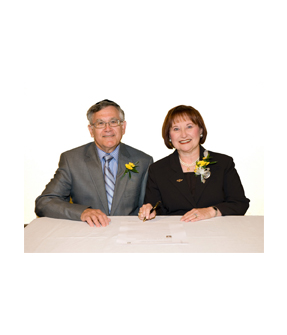 The moment you walk into Esther and Marvin Samphir's home it becomes apparent that family history, children and artistic expression are integral to their lives. Family photos abound and the kitchen walls are plastered with drawings and expressions of love from their eight grandchildren, all of them under the age of six. It is for these grandchildren that Esther and Marvin are participating in the Endowment Book of Life, hoping to ensure a strong foundation and a viable future for the youngest members of Winnipeg's Jewish community.

Neither Esther nor Marvin was born in Winnipeg, but after decades living here and raising their family here it is definitely the place that they call home.

Esther was the daughter of Holocaust survivors, Lily (Zaid) and Samuel Stall, who had settled in France after their liberation. Esther was born in 1946, and moved to Winnipeg with her parents three years later when relatives sent for them. Esther's brother Norman was born in Winnipeg in 1950. Esther was fluent in French and Yiddish when she arrived in Winnipeg, and learned English easily. She attended Peretz School and St. John's, made life long friends, and was active in the YMHA and BBYO.

Esther's father worked as a tailor and her mother was a homemaker. Both her parents stressed the importance of education, Yiddishkeit and menshlikeit, and raised their children in a warm and loving environment. The door to their home was always open, Shabbat and holidays were celebrated with extended family, and summers were spent with friends at Winnipeg Beach. In spite of their suffering and losses during the war, Esther's parents were determined to move forward in life, focus on the positive, contribute to their community and give back to others. This upbringing, combined with her mother's openness in talking about her war-time experiences, instilled in Esther a sense of history, compassion and generosity, and greatly influenced the kind of person, mother and grandmother she would become.

Marvin's parents, Rae (Cohen) and Harry Samphir, were both born in Winnipeg to families that had fled oppression in Eastern Europe and settled in Canada in the early part of the 20th century. Harry moved to Montreal with his parents, and Rae followed shortly afterwards. The couple married in Montreal, and started their family there. When Marvin, their eldest child, was 14 and his younger brother Ralph was five, the family moved back to Winnipeg in order for Harry to pursue business opportunities. At the time, Marvin was unhappy about the move and about leaving all of his friends behind. He vividly recalls his culture shock when he arrived in Winnipeg and when he walked into Luxton School for the first time, not knowing anyone. He quickly adjusted to his new home, however, made friends, got involved in the Y and with AZA, attended St. John's and graduated from West Kildonan Collegiate. After high school he studied at both the University of Winnipeg and the University of Manitoba, where he was active in the APp Fraternity. He met Esther in 1965 while he was in law school at the University of Manitoba, and they married three years later.

After high school Esther took some university courses and then taught nursery and kindergarten at Talmud Torah under the mentorship of Helen Mendelson. She left teaching after five years to start a family — Joel was born in 1970, Daniel in 1973 and Marni in 1974. Together, Esther and Marvin instilled in their children an appreciation of their Jewish identity, community and family history. When Esther's father turned 70 and also retired, they took him and all three children to France. They wanted to give Sam the opportunity to visit with his European family, including his 90 year old uncle, and they wanted to give their children the opportunity to meet this extended family and get acquainted with their European heritage. Esther and Marvin also sent their children to Jewish day school, encouraged them to participate in the March of the Living and visit Israel, and taught them by example to give back to community.

When her kids were still young, Esther began volunteering at the Winnipeg Art Gallery, giving school tours. She then became an employee of the gallery, working as assistant to the art educator and school tour coordinator for 11 years. She also was active with the Ramah School PTA, NCJW, Hadassah, Rosh Pina, Winnipeg Jewish Theatre, and the Holocaust Awareness Committee, conducting interviews in Yiddish with elderly survivors. Marvin too was involved with community, primarily with B'nai Brith and B'nai Brith Camp. He practiced law for more than 37 years with the provincial government and as senior council for the City of Winnipeg.

In retirement, Marvin pursues myriad hobbies, including photography, cycling and gardening. He and Esther travel often, and happily spend a lot of time with their children and grandchildren. Joel, his wife Naama and their sons Eytan, Liron and Adiv live in Winnipeg. Daniel, his wife Amy and their children Coby and Hayley, also live in Winnipeg. Marni and her husband Jonathan Halpern live in Toronto with their son Leo and twin daughters Lily and Sophie. The older children all attend Jewish day school, and their parents are all devoted to their communities and to one another, demonstrating that they have learned Esther and Marvin's lessons well.